A tale of lying and cheating the American taxpayer for decades. An Alfred Hitchcock thriller, all all-American tragedy. It’s a leagacy of corruption and scandals going back more than thirty years, starting out as a youthful attorney, a young doe-eyed Hillary fresh from interning with Lucifer himself! One of her first projects, investigating Watergate, had her terminated immediately for unethical behavior.  Then the Whitewater real estate scandal, and then as First Lady, the Travelgate investigations and scandals galore! Then as Secretary of State, the murder of Ambassador Chris Stevens and the frantic media cover-up of the terror attack in Benghazi. You will recall her bloodcurdling cry: “What difference at this point does it make?” regarding the four Americans left for dead, while the Clinton Foundation was raking in tens of millions of dollars from Arab terrorist sponsoring states. All the while this highest “public servant” was keeping her emails hidden from the public on a private server, all of which she deleted and kept secret. Now showing throughout New York City, the weekend of April 11th and 12th, the long awaited thriller: “Liar, Liar.” 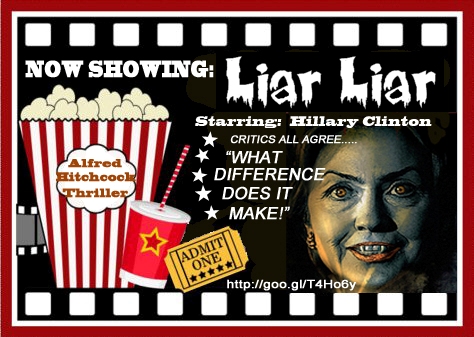