The Queens Village Republican Club hosted a celebratory Christmas/Chanukah Dinner Party with nearly 100 Queens Village Republicans and friends. Many jubilant new faces were in the crowd and friends from as far away as the Bronx, New Jersey and East Fishkill, NY shared in the joy of the holidays. Everyone was excited to be part of the NEW Republican Party as we enjoyed a feast catered by NYC’s best, Bassett, and we listened intently to the rousing words of Queens County GOP Chair, Bob Turner and NYS Federation of Republican Women President, Ann Schockett. 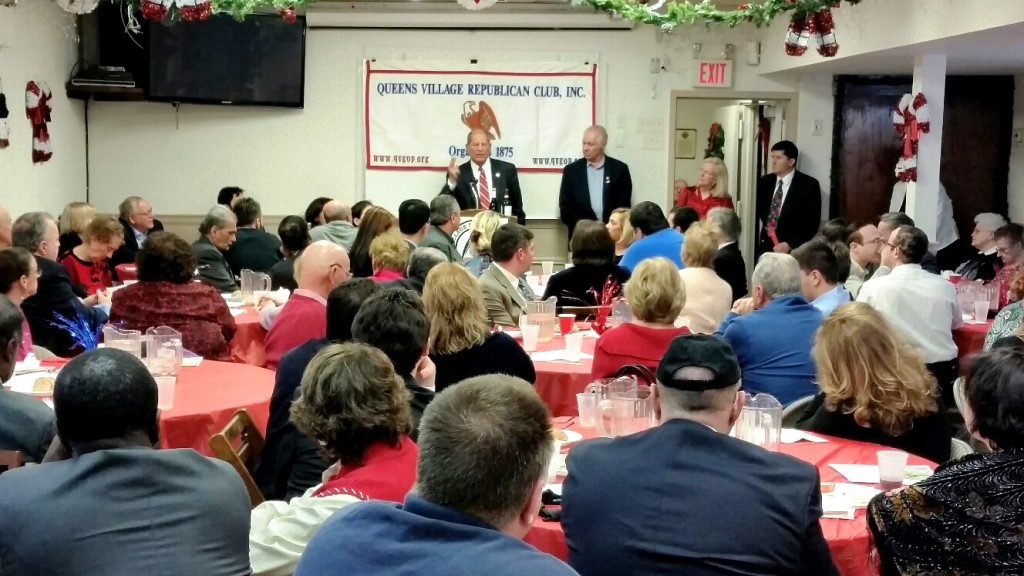 Right before dinner was served, a moment of silence was observed in honor of the victims of the terrorist slaying in San Bernadino, CA, and Paris, France and Chaplain Philip Sica gave the opening prayer. Normal club business was dispensed with, except for the report and floor vote by the Nominating Committee. Delvis Estrada will be our Club’s new Vice President, and Nikoloz Chkheidze will be added to the Board of Directors, and both will be installed at our next club meeting. 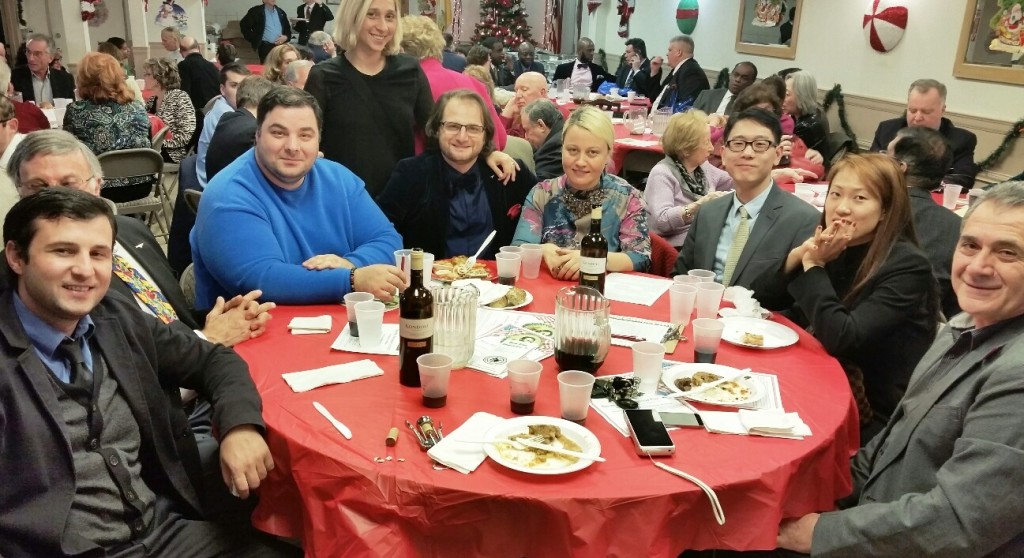 Nikoloz Chckeidze and family and friends from the Georian community, and James Barron, Song Han and Sam Greenberg

Our club mission was reiterated by President Orenstein, which is to spread the core principles of the Republican Party, maximum personal freedom, smaller government, pursuit of the American dream and support of our soldiers, our veterans and that we support our police! We also follow Ronald Reagan’s 11th Commandment – “thou shalt speak no ill of fellow Republicans.” Our purpose is to win elections and we had several outstanding candidates who stepped up to the plate and ran for public office and gave it their all. Joe Concannon who ran for City Council and Mike O’Reilly, Republican judicial candidate were present in the room and were wildly cheered. Most everyone in the room was part of the historic effort to get them elected. We will never give up until we take back our government and win elections here in NY! 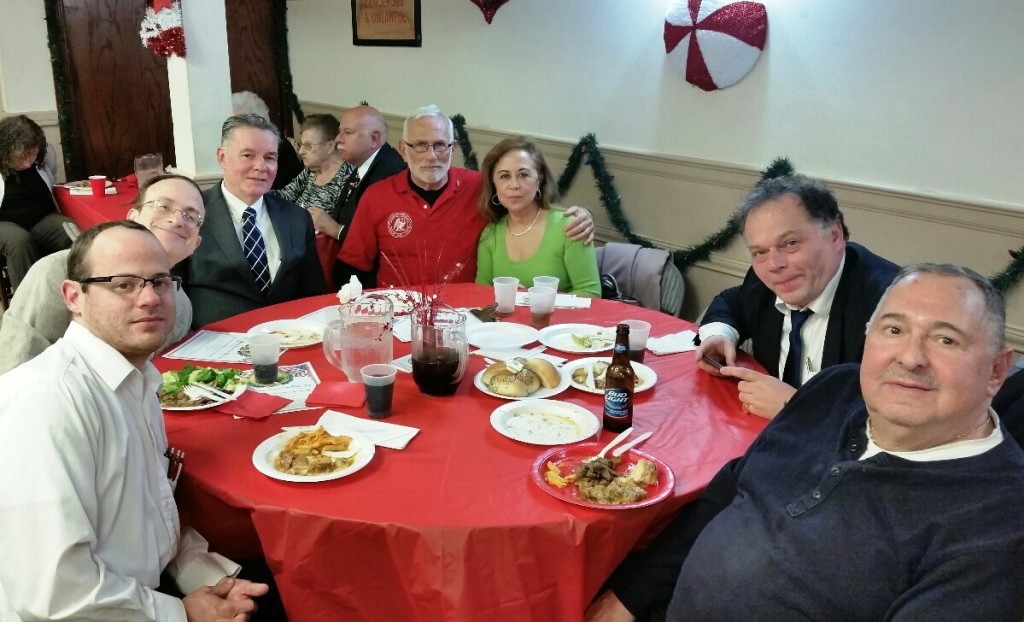 Frank Sportorno, who plans to run against Sen. Schumer and was just endorsed by the NYS GOP, was also in the room.  As the owner four elevator companies, he sees the state of our country and state in poverty with many jobs fleeing to other states and overseas.  He also is seeing most of his Democrat labor friends starting to come over to the Republican side. A shining star, John Curzio, a young Republican who ran for Town Council in East Fishkill was there with his Dad, a Police Lieutenant from Mount Vernon. 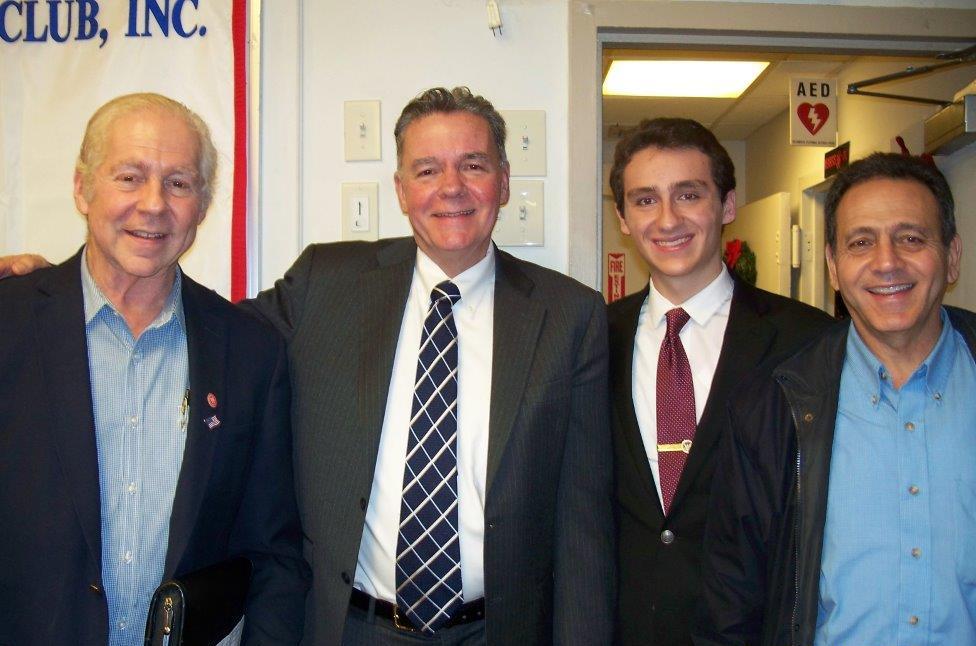 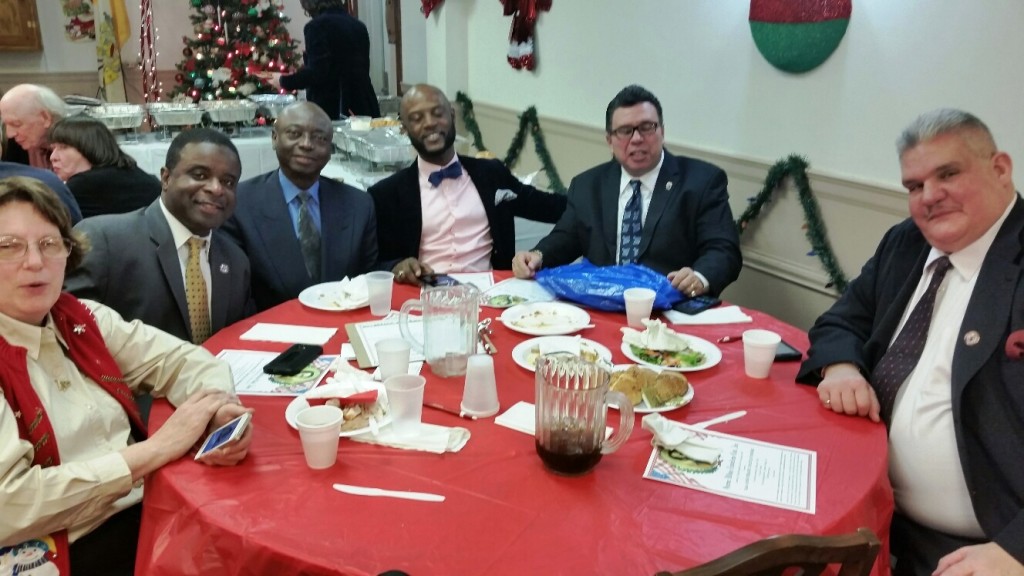 The audience was regaled by the encouraging words of Congressman Bob Turner, Queens GOP Chairman.  He painted a stark picture of our times, how the left can get away with putting up a socialist, Bernie Sanders, to run for president. We have lost our fundamental laws of morality and that God is the giver of law and the Ten Commandments, upon which all laws are based.  When we have departed from this truth we have seen the likes of Stalin, Hitler, Pol Pot  and Idi Amin.  If man makes the laws then he can change the laws. 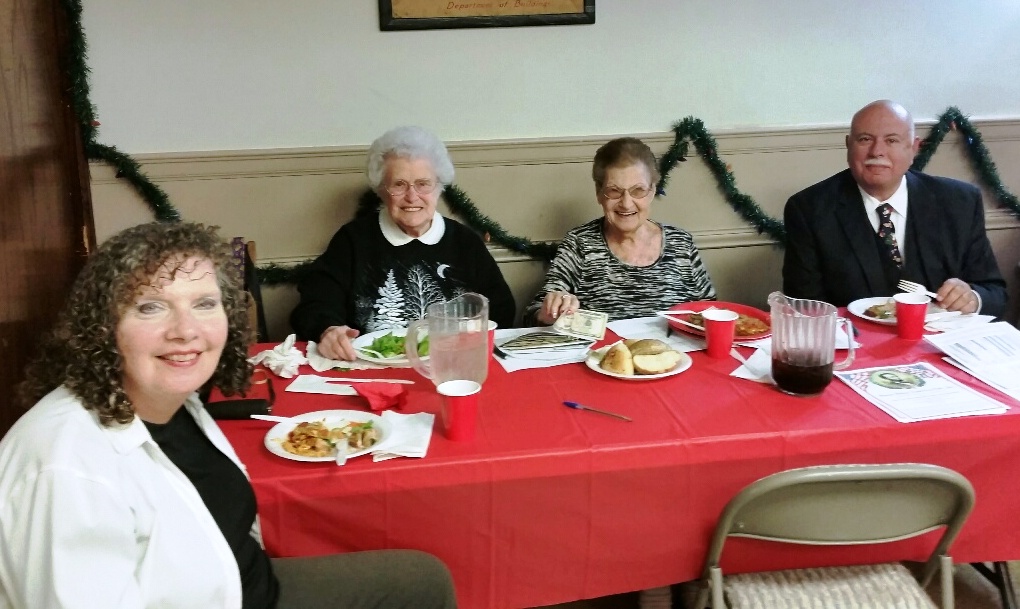 Turner said there is a big difference between Republicans and other Parties.  There is an assault on free enterprise.  The U.S. is the most prosperous and freest nation, based upon our Constitution and free enterprise.  Most people agree with the Republican Party principles of our fundamental liberties, size of government, etc. We have a good chance to change things this year and we need good leadership in the U.S. Senate and House, and the White House.  It takes hard work and dedication to get petition signatures, get out the vote and motivate people. Voting is one at a time.  “With your help we can do it.” 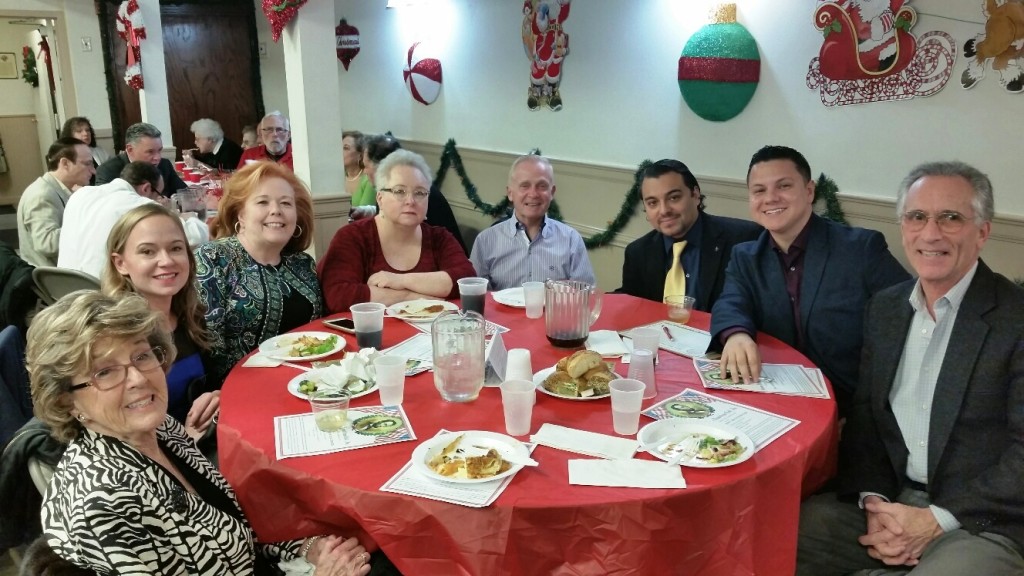 Ann Shockett, spoke next about her upbringing in Belle Harbor, Queens where she was a  Republican District Leader and a Community Activist. She complimented our Club saying “What a special Republican Club this is.”  She spoke about her father who was a physician who made house calls.  That in the 1950s when life was uncomplicated and all people got along—neighbors, friends and family.  “We were all Americans, not Hispanics, Blacks, Jews, etc.”  We all shared in the pursuit of the American Dream—we had the same values and needs, while honoring our traditions. 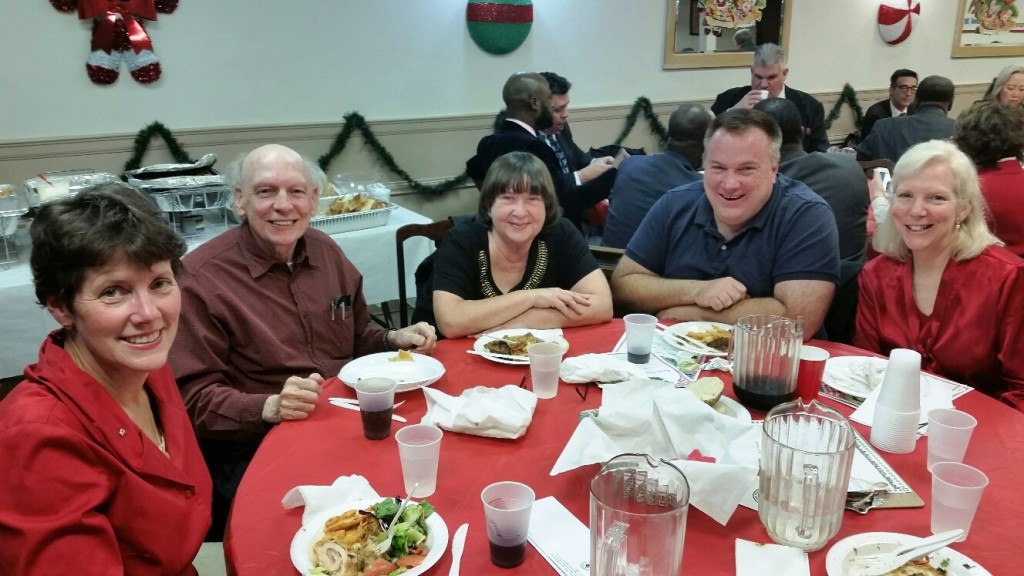 Shockett urged that we need to make sure we have a Republican in the White House in 2016 who is concerned with our needs and values.  These are critical times with terrorists raising their ugly heads over and over.  She said:  “Our President [Obama] doesn’t get it.”  Our armed forces have been cut, law enforcement has been cut off at the knees.  “Thank God for Joe Concannon,” she said.  We have an $18 trillion debt; 2% GDP, with the largest number of people on food stamps in history.  Where is hope and leadership?  There is unrest and hatred on our college campuses, etc., higher debt, borrowing, spending is out of control, healthcare premiums are going way up. 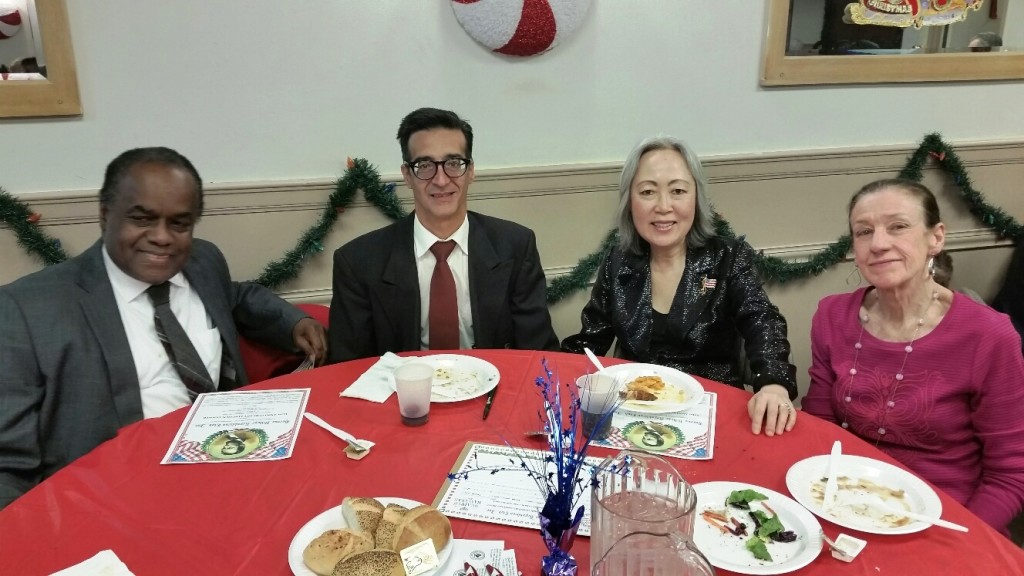 But people are now “getting it.”  We have a Democrat President, Governor and Mayor who don’t know how to govern.  We need to stand up for what’s right.  “We have not left the fight, this is the 11th hour” she implored.   She feels there is hope for the future.  History is on our side.  We want freedom for all citizens; we want to follow the law.  With a message of hope, she cheered us on, that despite hardship and fears we are part of the most amazing country in the world.  Our country is built on special values.  Our government needs to watch out for us.  We need to get out there and spread our beliefs.  When she grew up, people loved their neighbors and country.  She again wants our neighborhoods to be secure and safe, a sanctuary for our citizens.  There is hope for the future. 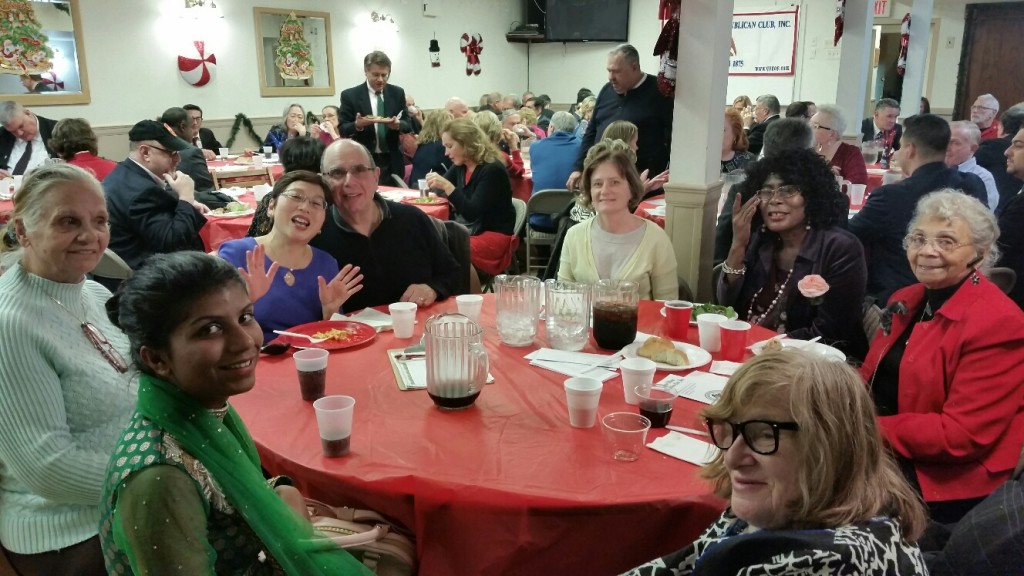 All were encouraged with the messages of hope for our country. The joyous event ended with a spirited wish for a Happy Chanukah, a Merry Christmas, and a unified appeal: God Bless America! 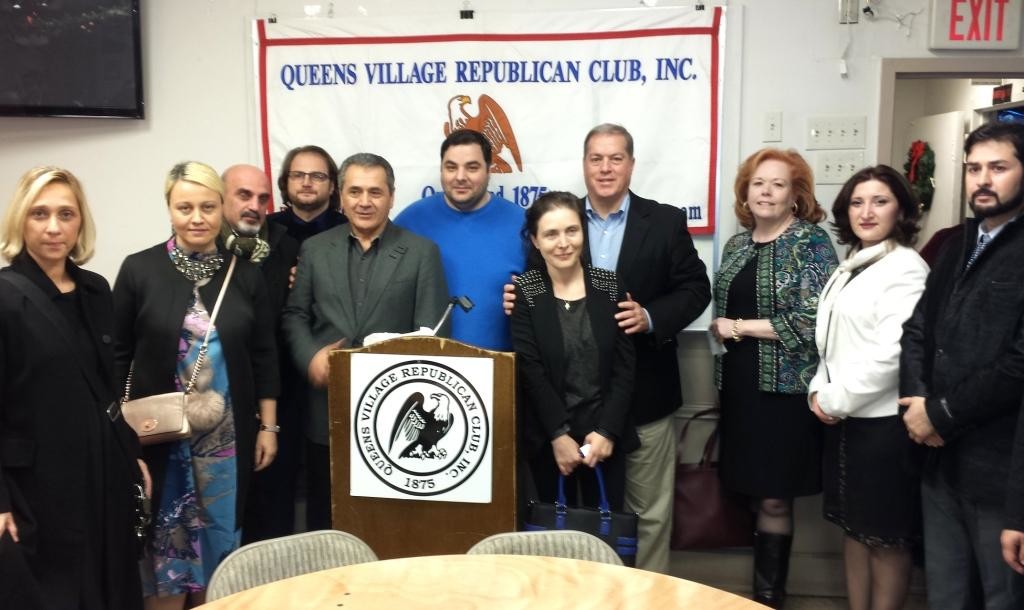 Joe Concannon and Maureen pose with Nikoloz and Georgian friends

« PreviousHAPPY THANKSGIVING!!
Next »Give your local papers a piece of your mind