Give your local papers a piece of your mind

Give your local papers a piece of your mind!

If you’re as outraged as I am by what you’re reading in the media lately, you need to pick up your pen (or keyboard) and write to your local papers and give them a piece of your mind! You might want to start with a letter to the New York Times (letters@nytimes.com), which just came out with a front page editorial, for the first time since 1920, entitled The Gun Epidemic calling for stricter gun control, just days after we suffered one of the worst terrorist attacks in U.S. history.

You might be reading about the Bizarro World of President Obama and Democrats blaming climate change for the rise of terrorism and ISIS, or perhaps Mayor de Blasio’s visit to a mosque in Jamaica, Queens vowing to protect Muslims against hate crimes, instead of protecting New Yorkers against the pervasive threat of radical Islamic terrorism in New York City. Or you may be outraged by the grandstanding of de Blasio and our elected officials falling all over themselves to welcome the Syrian refugees to our city.

That’s just what I did. When I read the article in the Queens Chronicle, “Six of seven Queens reps vote against curbing Middle East refugee program”  bellowing that America would be turning its back on the Syrian refugees fleeing war and terror, I realized that neither they nor the Queens newspapers were representing my voice, so I wrote letters to all the Queens weeklies. My response was published in this week’s Times Ledger in a pro and con “Readers Write” column. 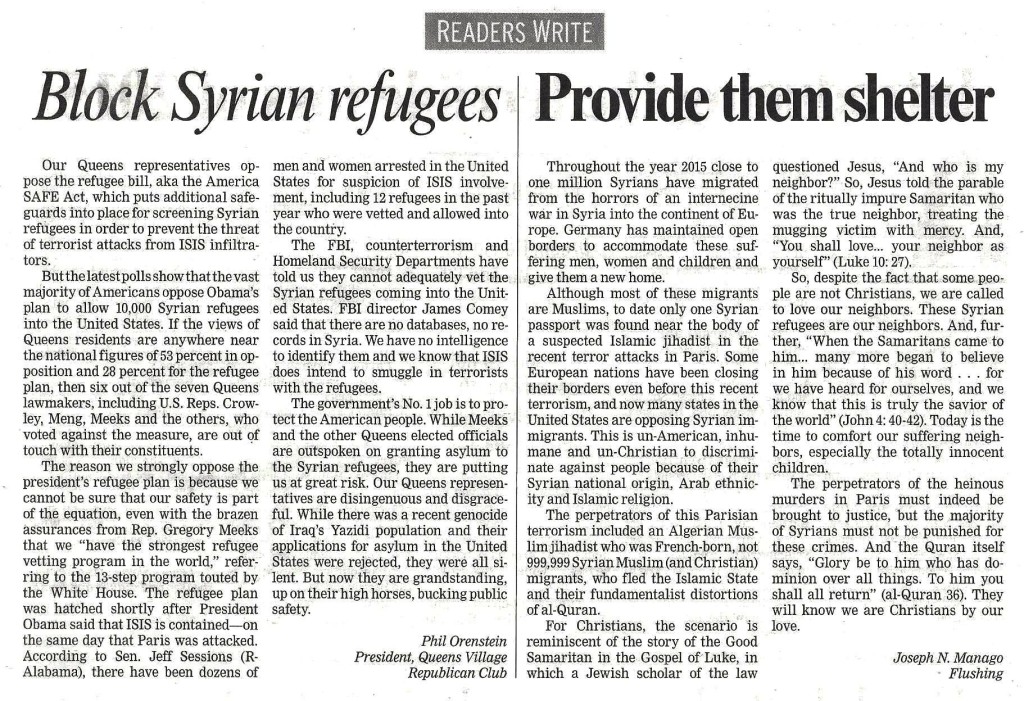 People still read the papers and we need to make our voices heard. Write a Letter to the Editor to our local Queens weeklies or your own local paper. Letters should preferably be 150 to 300 words, (the Queens Chronicle will allow up to 400 words and Times Ledger “Readers Write” column up to 750 words), and should refer to a recent article. Include your name, address and phone number and send your letter in the body of the email. No attachments. Write your argument professionally, succinctly and respectfully for the best chance of getting it published. Here are the email addresses of the Queens weeklies:

« PreviousJoyous Christmas/Chanukah Party with QVGOP Family
Next »For the NYPD, this has been a terrible year