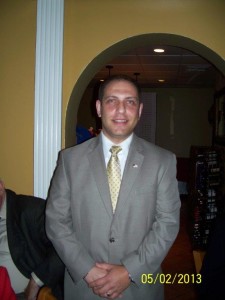 Alex Blishteyn said that the Republican Party is not dead in Queens County.  We are conservatives with common sense.  We can’t afford to push businesses out of New York.  He said Republicans are “outmanned, outgunned, outspent,” but we can win.  We must go to our friends, neighbors and relatives, make phone calls, hand out flyers—we need grassroots support.  The Petitioning process to get on the ballot is about to start in June. That is the first step on the road to victory in November!

« PreviousEat, Meet and Greet: The Past Returns! The British in India 1730-1945
Next »Dennis Saffran spoke at the crowded May 2nd Club meeting.