In Donald Trump’s Old Neighborhood, a Show of Support

In Donald Trump’s Old Neighborhood, a Show of Support

NEW YORK— On a recent evening about 15 miles outside of Manhattan, approximately 50 people gathered in the borough of Queens to voice support for a fellow Queens native who also happened to be running for president – Donald Trump.

After servings of cake and coffee, and several warm up chants of “Make America great again, Trump, Trump, Trump!” the Queens Village Republican Club was ready to get down to business.

Queens Village, founded in 1875m is one of America’s oldest Republican clubs.

“The first order of business is to vote on a resolution for the Queens Village Republican Club to officially endorse Donald J. Trump as a Republican candidate for president,” said Phil Orenstein, president of the club. “Do I hear a motion for a resolution?”

After a show of hands, a unanimous decision was made – the club would officially endorse Trump.

Amid a roomful of cheering and clapping, Orenstein declared, “Now I can say it to any news media outlet that calls me… and they’ve been calling!”

Among the mostly elderly, white male group was a handful of African-Americans and southeast Asians, a small nod to the diversity of Queens. Hemant Shah, 2nd vice president of the Queens Village Republican Club and a New Yorker who originally immigrated from India, explained why he was voting Republican.

“I realized that I belong to the Republican party. Why? Because of my conservative values – family values, less spending, less government, less taxes,” Shah said. “And I realized that this is what I am.” 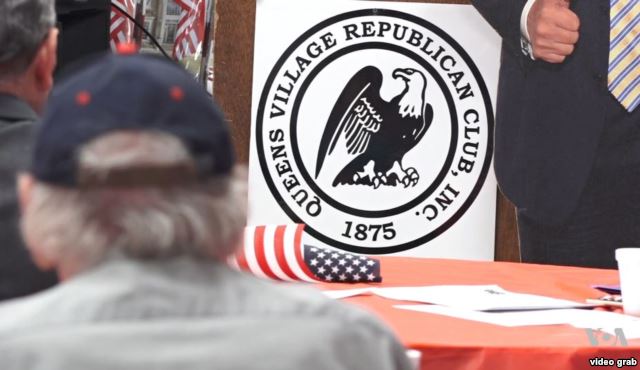 Scott Berry, a fellow club member, singer and voice teacher who earlier in the evening led the crowd in a rousing rendition of “You’re a Grand Old Flag,” explained why he was politically leaning right.

Also in attendance was Rabbi Menashe Bovit, who cited Trump’s support of Israel as a major reason for backing the candidate.

“His heart is with the state of Israel,” Bovit said. “When Netanyahu was running for election, he actually made commercials for Netanyahu … and of course his daughter is Jewish. He has Jewish grandchildren, so it resonates with him.”

In a city that’s largely seen as Democratic, the evening provided a snapshot of the considerable faction of Republicans within New York City.

“Even Democrats will admit that it’s not good to have one opinion. For a stronger community, for a healthy, robust community, you always need two opinions. America is a democracy, America is a place where there’s a flux of ideas,” Orenstein said.