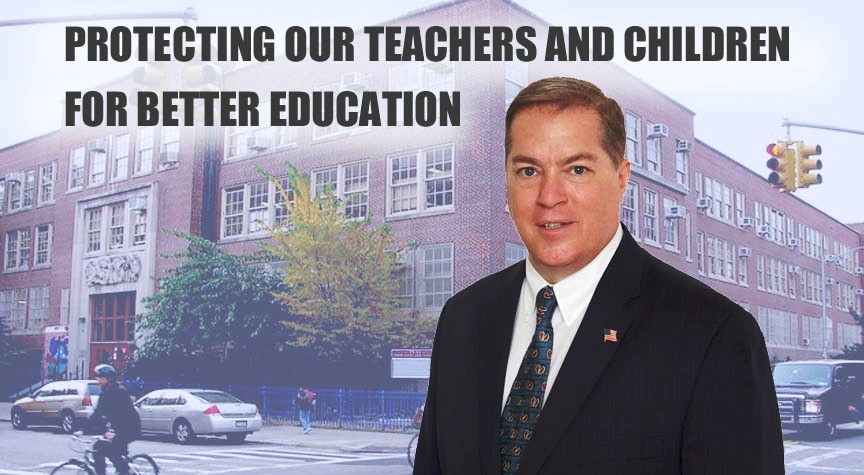 Cover-ups, corruption and lack of following New York City Department of Education rules and procedures is running rampant is some of the city’s worst failing school districts without consequences.

Queens Village, NY – “Schools in each of the boroughs seem to have questionable ethical and legal practices,” stated Joe Concannon, head of the “Protecting Our Teachers and Children For Better Education” campaign. Some of these very school districts in Queens have a student pass rate of 42%, shocking both parents and community leaders. We are hosting a press conference in front of School District #29, one of those struggling and failing districts in Southeast Queens which Superintendent Lenon Murray has overseen for many years. Where is the accountability for performance in these failing districts?

We are asking for full audits at the state and city level and for a federal watchdog to oversee the allocation and expending of resources and the restructuring of the school by school CEP (Comprehensive Education Plans) so that they are in line with other schools in the borough of Queens and City of New York and the SLT (School Leadership Teams) to ensure school, parents and the community have equal footing to ensure a school’s success. These superintendents need to be managing the resources, both human and financial, to ensure full accountability. They owe it to the children and the community.

The failures in District #29 are not unlike what we are seeing in other failing school districts. The road is filled with documents and paper trails to many questionable and unprofessional practices. At the press conference we will shed light on exactly what these practices are.

We believe these issues to be systemic throughout the city. Another example of this gross mismanagement and unprofessional conduct took place at Flushing High School where a teacher was threatened to be assaulted by a student openly in a classroom and the teacher was banned from the school and sent to the Department of Education’s “Rubber Room.” Whistleblowers are not protected; they are made an example of and tortured by the Department of Education in full view of the UFT.

Joining me at the press conference is Michael O’Reilly, an attorney and candidate for Congress in New York’s 5th District. O’Reilly stated, “I don’t care if you are a Republican or Democrat… all of our children are the victims of this sham and as I visit with the community members, each of them say the same thing… Make Queens Great Again.” O’Reilly questioned what the current elected officials who have ties to these schools have done. We’re asking, Rep. Meeks, Sen. Sanders, Sen. Comrie, et. al. , why have you let this go on and on and on, ignoring parents, local members and the calls from constituents begging for change?

The media and all concerned citizens are invited to attend the press conference, hosted by former NYPD Captain Joseph Concannon.

« PreviousIn Donald Trump’s Old Neighborhood, a Show of Support
Next »A cause to end the genocide in Pakistan