The press conference at Queens Borough Hall, called “Cuomo Outrage!!” organized by the Queens Village Republican Club went on as scheduled, although the snow prevented several confirmed speakers from showing. Under the overhang on the steps of Borough Hall, a total of seven spoke out to demand an apology and retraction of Governor Cuomo’s remarks.  They delivered a message on the Governor’s arrogance of power and the fundamental freedom of speech which no elected official has the right to violate especially the highest civil servant in the state who is acting more like a king than a civil servant. 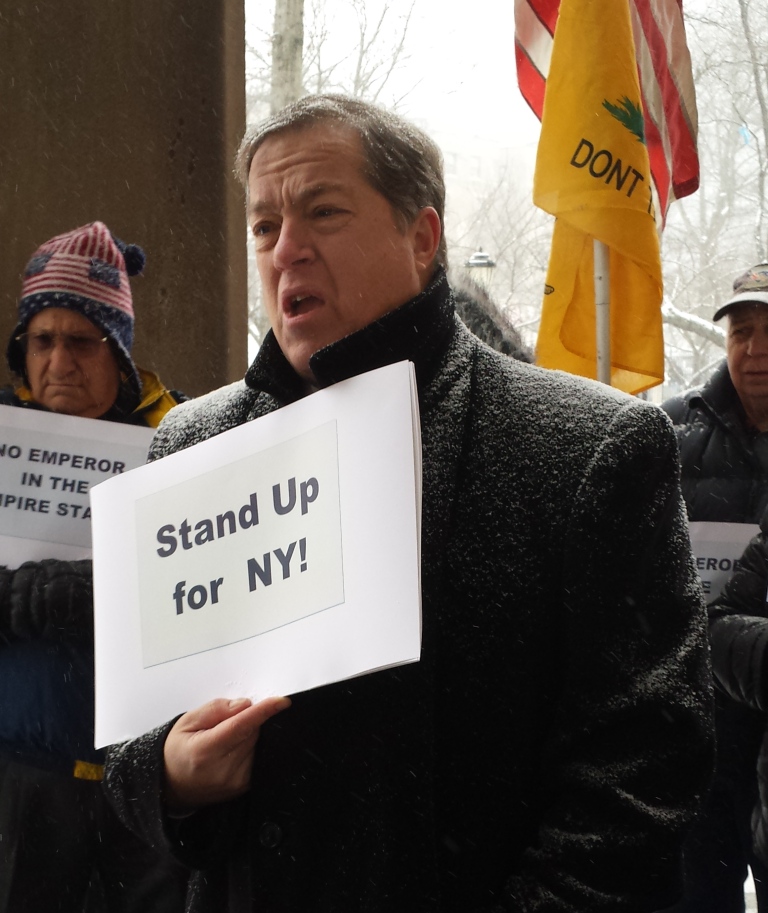 “The Governor of NYS represents all its citizens and residents, not just those he chooses or those who agree with his political views. Queens County is the most diverse county in all of the United States and it’s the Governor’s home neighborhood.  No elected official should ever demonize a law abiding group of individuals whether or not he/she agrees with them. Queens County has hundreds of different cultures living harmoniously together each and every day….why would a Governor degrade himself by singling out one group which happens to have a different political view than his?” 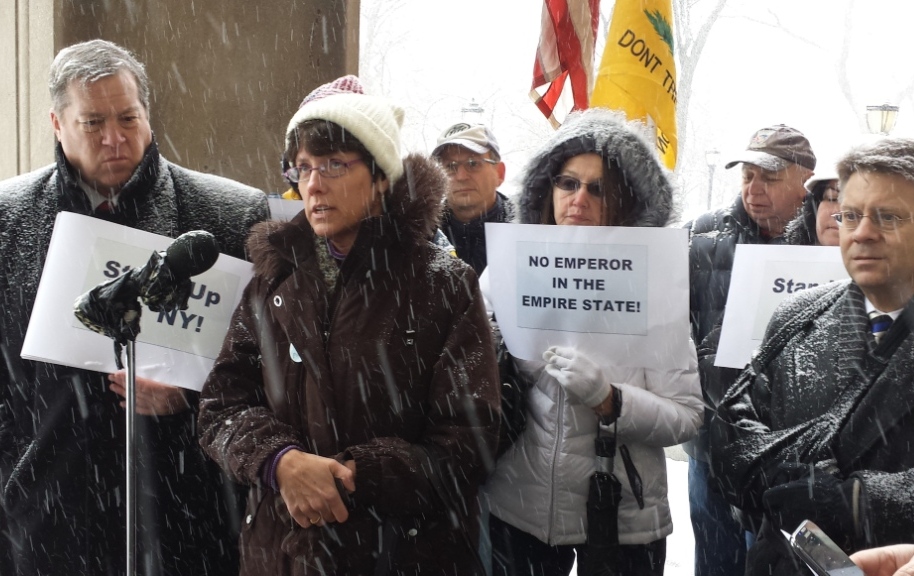 “I was born and raised in Nassau County and now raising my family for the past 25 years in Queens, New York.  Who is our Governor to tell any New Yorkers, regardless of what they believe, that they don’t belong in New York!  I was also raised to believe in the sanctity of all human life, and I will continue being an advocate for those who cannot speak for themselves, especially our unborn children.” 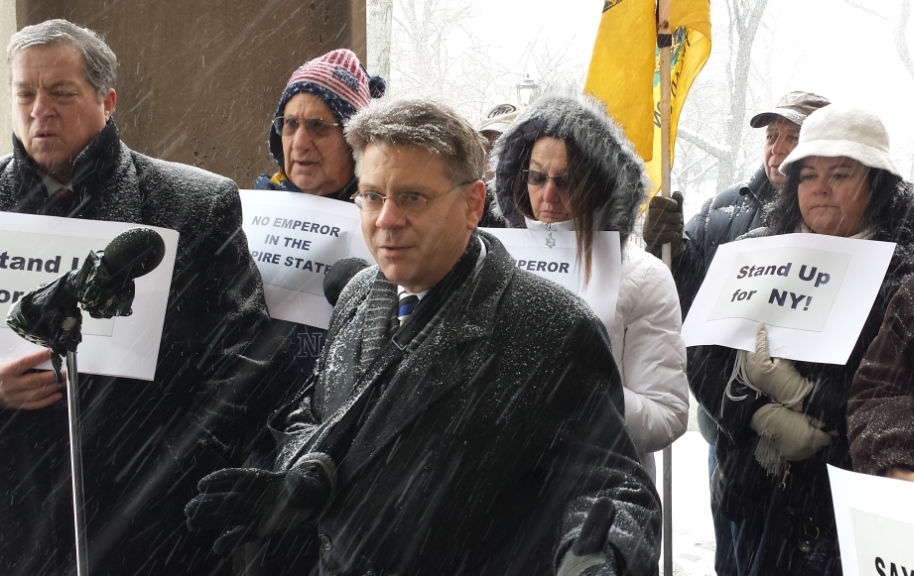 “Gov. Cuomo claims to celebrate the diversity of New York, and of Queens in particular.  But millions of new immigrants oppose same-sex marriage, just as Pres. Obama did until a year and a half ago. Are they welcome in Andrew Cuomo’s New York, or does he want them to go back where they came from? It’s Gov. Cuomo’s McCarthyite attempt to demonize and banish views with which he disagrees that is out of step with the ideals of New York and of America.”

“This emperor has no clothes. He uses naked power to push us progressively toward a fascist state. Is he oblivious to the effect his words (spoken as chief executive) could have on extreme liberals who might take his words as a license to abuse his opponents?”

Herb Stupp, former Commissioner of NYC Dept. for the Aging, Queens County Republican Party leader, had this to say:

“In the 19th century, a classical liberal would disagree with you, but defend to the death your right to say your piece.   Today, our Governor says that those who disagree with his left-liberal views ‘have no place’ in the State of New York. This includes the Cardinal, Catholic Bishops, orthodox Rabbis and ministers, and millions of New Yorkers who support the right to life, traditional marriage, the 2nd Amendment and the right to self-defense. What a disgrace that people who have traditional viewpoints would be shunned by our Governor. He’s already had an impact:  Sean Hannity says he is moving out of New York, since the Governor wants conservatives out. With Sean go millions of dollars in tax payments, and dozens of jobs. We here disagree with Alec Baldwin’s viewpoints, but we want him to keep paying taxes in New York !” 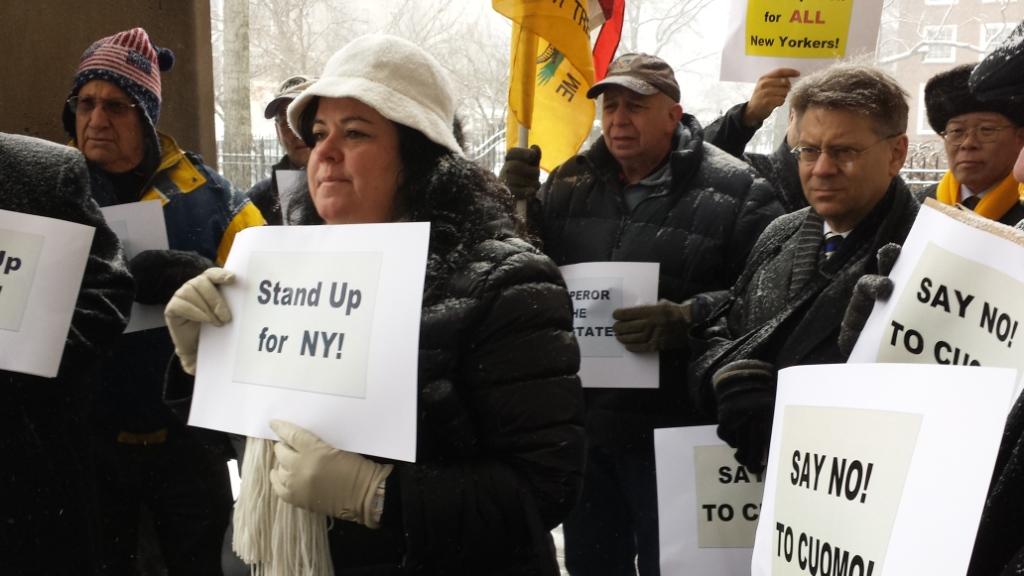 Margaret Wagner, board member and past president of Rockaway Republican Club, said the following:

“I am not here today as a Conservative, a Democrat or a Republican. I am here today as a New Yorker and I believe the Governor owes all New Yorkers an apology.  I ask you all to listen very closely to the Governor’s speech because today he targeted Conservatives. Tomorrow it might me you.  He targeted one group of New Yorkers. He was antagonizing and was provoking hostility.  Listen to his voice.  How does a Governor target a certain group of people and tell them they have No Place Here in New York?  The Governor delivered a Hate Speech.  Here in New York we will not tolerate a leader who uses such language.  It terrifies me that he is the Governor of New York and had the audacity to ask certain people to leave New York.  As far I remember this is the United States of America and you can live where you want.” 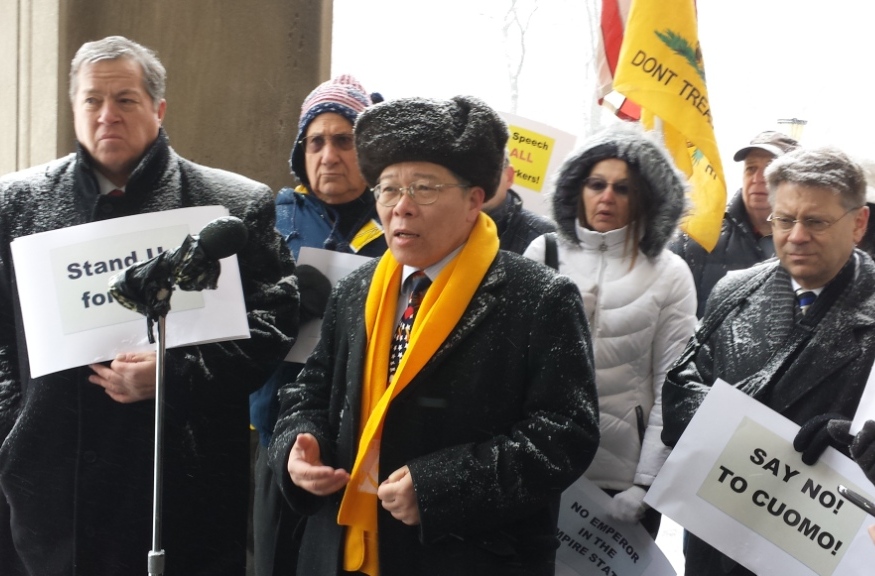 “Since I came to New York in 1978, I have lived here longer than anywhere else on this earth, and took pride to be a New Yorker. However, I feel ashamed to have a Governor as Cuomo. Cuomo thought he represented all New Yorkers; in fact he only represented himself. People with traditional thinking often are criticized as “intolerant”, but what is the logic of our Governor? Only people think in the same way as he can be called New Yorker? Cuomo is said wanting to run for the President of the United States, if he cannot tolerate his fellow Republican New Yorkers, will he tolerate the people from other states? No matter as native born Americans, or immigrants, we all love New York, and are New Yorkers. We had been the “Silent Majority” for too long, so that some noisy minorities thought they represent all of us. Now, we Silent Majority must stand up, and oppose Cuomo’s dictatorial thinking.” 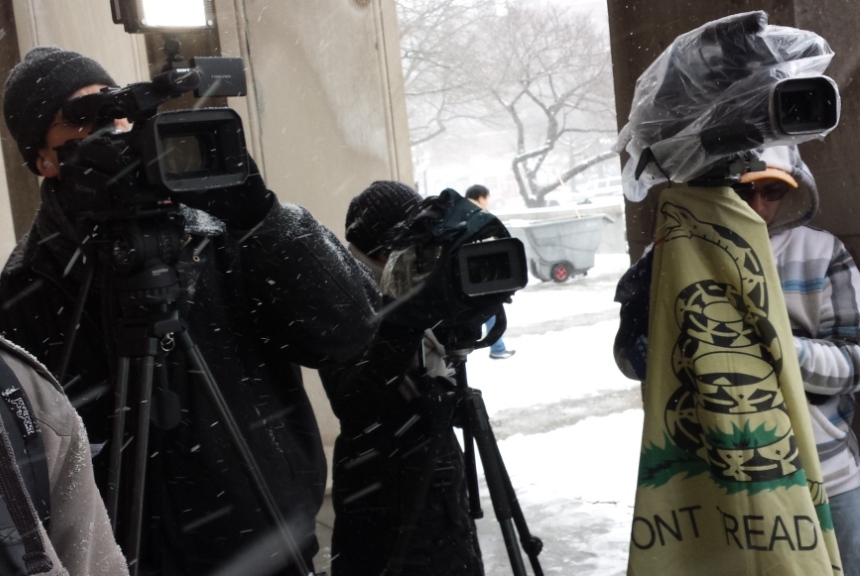 Media was out in force. Thank you NY-1, Queens Tribune, Queens Chronicle, Catholic News Service and other media for covering our press conference to send a message to King Cuomo who would banish dissenters from his realm, namely conservative Republicans. We say NO to Governor Cuomo, we wont go! We demand an apology and retraction of your remarks.