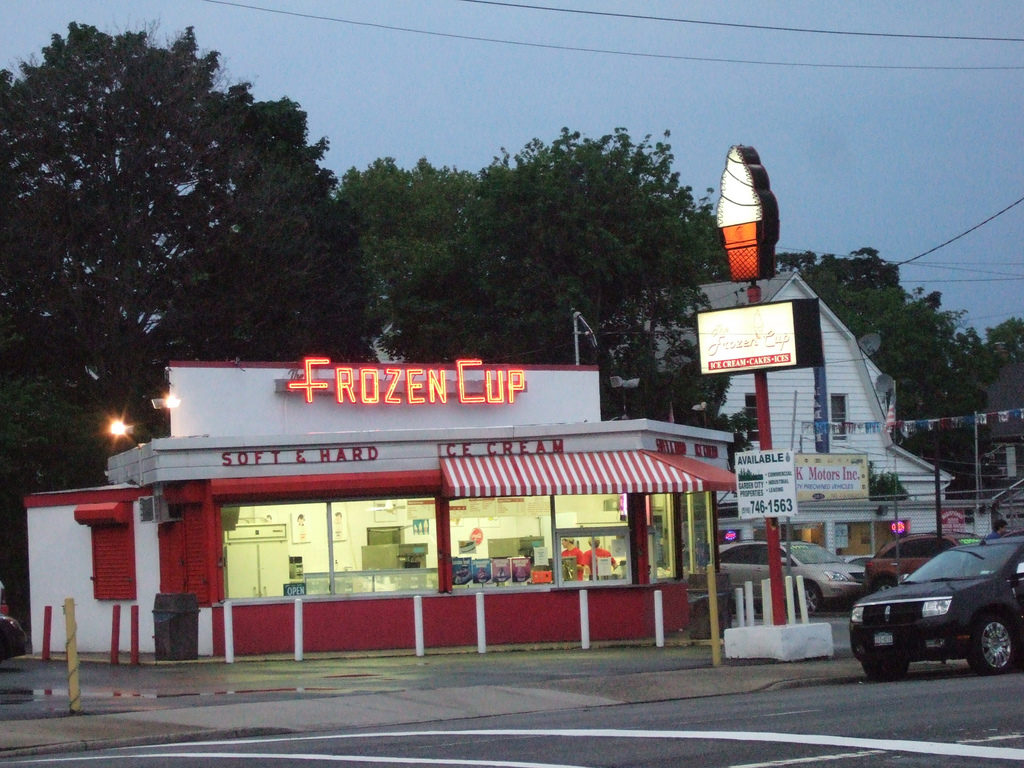 Frozen Cup, the Ice Cream stand that was an institution at this location prior to the building of the Bellerose Inn hotel.

The history behind the homeless in New York City is rich in tradition dating back before the days when Hell’s Kitchen was booming and we were deep in the politics of Tammany Hall.  Oh, those were the days and the Irish immigrants occupied many of those spaces. As the years progressed one ethnic group after the next climbed the social ladder out of those quarters and moved on up.

Reality: Today City Hall scorns us saying that we are mean, inconsiderate and without compassion for the “homeless.” Our local neighbors say the area we’re calling home is becoming a living hell as our quality of life drops like a brick off a rooftop.  Low level quality of life complaints are back up, but not entirely reported, causing friction between government officials and us, the residents.  Meanwhile, local hotel owners are raking in a quarter million dollars a month per hotel at taxpayer expense and with the City of New York boosting the nightly hourly rate one hundred dollars over their nightly hourly rate card.  Talk about de Blasio taking it to the taxpayers in the pocketbook and where we live, Wow!

FACT: NYS is the only state in the nation as far as I know that has a, “RIGHT TO SHELTER” law on the books.

FACT: NYC Department of Homeless Services (DHS) Commissioner is the very same person who earned a living suing NYC concerning the homeless for twenty years or more.  He resides in Park Slope, NY.  The Commissioner of DHS is finding lodging for 60,000-80,000 people a year and contracts with various sheltering services who are using area hotels.  Three meals a day are provided at taxpayer expense.  Resources are limited, curfews are broken, kitchens are non-existent and the requirement of one women and child occupants are not the norm in any way at all.

FACT: Mayor Bill de Blasio has completely opened up our city’s doors to the homeless from every state in the nation as well as those from every nation on the face of the earth.  The Mayor expects the numbers of homeless to increase by 5,000 per year.  Are you ready to absorb this cost?

Bellerose/Floral Park hindsight: Frozen Cup, the Ice Cream stand that was an institution at this location prior to the building of the Bellerose Inn hotel, was also a turning point.  In hindsight, the community should have purchased the building and kept it off the market.  Easily said, I know, but that is the only way we could have preserved the character and quality of our community.  No one wanted or thought a hotel could ever make it in the area and reality is…now we are faced with a much larger problem at five times the cost.

I have said quite often, voting matters and elections have consequences.  What is unfolding in our area is destructive and unsettling to many of us.  Please go to the Department of Homeless Services web site and read the definition of homeless.  It may surprise you, I know it surprised me.  If you are on Facebook navigate over to: Joint Queens/Nassau County Task Force and you will see the daily notations and observations.  It is our community record book.

In the end, everyone’s life matters.  But the wholesale shipping of human beings from one place to another without the requisite services is asking for trouble.  More importantly it is shameful and disgraceful that in 2016 this is the best New York City can do to help women at risk, our military suffering from PTSD, those with lost wages, the mentally ill and even some of those just looking for more affordable housing without risking their personal security.  This Mayor is living in a bubble and as such is creating the foundation of his opposition for re-election.  We cannot just dump the distressed people ending up in NYC into a giant black hole in the ground.  We the people of NYC will demonstrate, protest and let others know we’re better than this.

« PreviousVideo: Roy Fox, guest speaker at Columbus Day Dinner
Next »All Politics is Local – Get Out and Vote!