“Elections have consequences. Voting matters. Let’s spread the message even more powerfully than before to vote, get registered and get involved in the Party of Lincoln. We have a great opportunity to deliver that message for our fellow citizens and bring them to our upcoming “All-Star Candidates Rally” on August 26 at the Knights of Columbus meeting hall, to hear the words of our prophets to save our city, state and nation.” 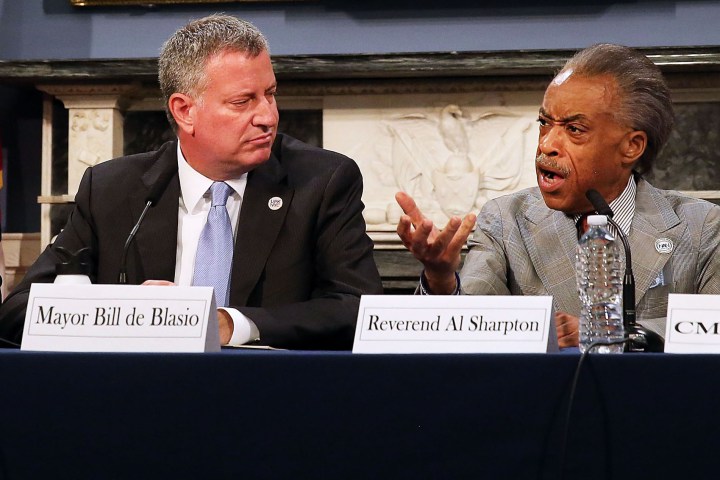 New Yorkers enjoyed a delightfully balmy summer with pleasant temperatures hovering around the 70s. But a major storm is brewing in New York thanks to the apathy of the voters who allowed a radical minority of New Yorkers to determine the fate for all of us. Mayor de Blasio, elected by a mere 17% of the city’s voters, recently gave rabble-rouser Rev. Al Sharpton a mouthpiece at City Hall. Now Sharpton is the de facto mayor of the City of New York and threatened to shut down the Verrazano Bridge and New York City. White flags were raised over the Brooklyn Bridge in recognition of our city’s surrender to mayhem and lawlessness.

Everyone thinks they are immune from history’s inexorable course. The horrors of the Holocaust, the great purges, the genocides and world wars of the twentieth century that resulted in millions of deaths were caused by the totalitarian political regimes of Nazism, Fascism and Communism. Today the ideologies that gave birth to these tyrannies are making a visible comeback under the guise of “progressivism,” or escalating government control over human destiny, aided and abetted by apathy and indifference on the part of the voting public.

No one could believe that Germany, the industrial and cultural heart of advanced European civilization, the home Goethe, Bach and Beethoven, could give rise in a matter of years to one of the most evil, barbaric killing machines in human history. Apathy and indifference prevailed while the radical madman, Hitler, a nobody in 1923, rose up to win a relatively minor percentage of the popular vote on the Nazi Party line and became the Chancellor of Germany in 10 years. No one listened to the wisdom of Winston Churchill warning that Neville Chamberlain’s appeasement of Hitler in order to secure “peace in our time” was a suicide pact, while Nazi tanks thundered across Europe.

History repeats itself and the result is always the same. The ancient story of the inhabitants of the fortified, walled city of Jericho is often recounted. They defied the word of the prophets and saw their city crumble as Joshua led the Israelites to victory in the Battle of Jericho. The Canaanites refused to listen and they perished.

Today the latter-day prophets are the visionaries who see the future and have been spreading the message to save our city, state and nation from the destructive path we are on. De Blasio campaigned on a promise to “end the era of stop-and-frisk policing” and has kept that promise since he’s been mayor. Last year, Republican candidates warned the voters that de Blasio and the Democratic candidates’ anti-law enforcement agenda and backlash against stop, question and frisk would return our city back to the bad old days of crime, chaos and gun violence before Giuliani was mayor. Murders peaked at over 2200 per year under Mayor Dinkins causing millions of people to flee NYC because it was too dangerous to live here.

Since then, New York City has earned the distinction of being the safest large city in America, protected by the proactive policing policies of Republican Administrations for the past 20 years. Now well into de Blasio’s first year on the job, crime, shootings and chaos are on the rise since the police are not stopping people and taking guns off the street and the criminals are emboldened as a result. This summer, shootings, auto theft, and serious assaults were up over last year’s numbers citywide, and fewer illegal guns were taken off the streets. CompStat data shows up to 1500% increase in shootings in some precincts. Now the squeegee men are back, costumed shakedown artists are harassing tourists at Times Square and more criminal suspects are resisting arrest and assaulting cops.

The Republican Party ran seven outstanding city council candidates in Queens last year, including former NYPD Captain Joe Concannon, attorney Dennis Saffran, State Committeewoman Scherie Murray, as well as MTA Chairman, Joe Lhota for mayor and financial services industry leader, John Burnett who ran for NYC comptroller. They all spoke out vociferously about law and order, public safety and fiscal sanity and the threat of the new progressive agenda that would destroy our city just as it almost did over two decades ago when liberal Democrats were in charge. We implored the voters to stand up in support of our police officers of the NYPD who risk their lives on a daily basis to protect the safety and security of all New Yorkers, but 75% of the voters stayed home. As a result of the widespread voter apathy, Mayor de Blasio, the most progressive mayor in our city’s history, was elected with a mere 17% of the voting population.

Now the lawbreaker, thug and charlatan who has been stirring up every ugly racial confrontation in America, Al Sharpton, is dictating to our Mayor, Police Commissioner and the City of New York, and they are literally kneeling at Sharpton’s feet. The total breakdown of law and order has begun and our beloved city is being brutally torn apart before our very eyes.

Elections have consequences. Voting matters. Let’s spread the message even more powerfully than before to vote, get registered and get involved in the Party of Lincoln. We have a great opportunity to deliver that message for our fellow citizens and bring them to our upcoming “All-Star Candidates Rally” on August 26 at the Knights of Columbus meeting hall, to hear the words of our prophets to save our city, state and nation.