A murdered Marine and his father’s fight for justice

The continuing story of LCpl Greg Buckley, Jr. and his father, Greg Buckley, Sr., who spoke in harrowing detail at last year’s Lincoln Day Dinner, about his son’s murder by terrorists in Afghanistan and his quest for justice for his son. This article was published in the South Asian Times and other publications. 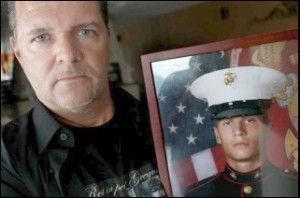 “If my son had been killed while in combat with the enemy, my heart would have remained broken until the day I died, but you would have never heard a word from me. I would have mourned in silence.” These were the heartbreaking words that Greg Buckley Sr. spoke when he and I met in a local diner in his hometown of Oceanside, Long Island last week.

The son Greg Buckley Sr. will always be mourning was named Marine LCpl Gregory Buckley Jr., who on August 10, 2012 at the age of 21 was murdered while lifting weights in a gym in a Marine Forward Operating Base (FOB) in Helmand Province in southern Afghanistan. Also murdered in the gym alongside Greg Buckley that day were two other marines, Sgt Scott Dickinson, 29, and Cpl Richard Rivera, 20. 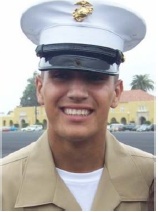 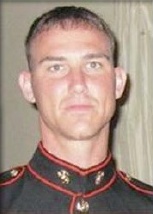 While they worked out, Buckley, Dickinson and Rivera, adhering to commands prohibiting Marines from carrying weapons inside their base, were unarmed. For their murderer, a nineteen year old terrorist named Ainuddin, who used a deadly AK- 47 rapid firing rifle as his murder weapon, they were easy prey. As the bereaved father began his own unofficial investigation into the murder of his son and his son’s two comrades, he began to ask Marine officials some tough questions. “I asked how my son’s murderer was able obtain that weapon, and I asked how he was able to get on the base to commit his crime,” Greg Buckley Sr. explained. Buckley’s questions were answered with mostly silence by Marine superiors.

So Buckley was left to obtain those answers on his own. And when he did, his grief became filled with a gnawing sense of disbelief. Ainuddin, Buckley discovered, had been authorized to live on the base because he was the “Tea Boy” of the District Police Chief of Helmand Province, Sarwar Jan. And due to Jan’s request as a police chief, Ainuddin was being trained in the use of weapons by Greg and other Marines on base. Then Buckley, tracing the serial number of the AK- 47, discovered another startling fact: the murder weapon itself had been registered to Jan.

“I was startled beyond words. And then the memories started to come back. Gregory had told me over the telephone three days before his murder that he didn’t believe he would return home alive. He told me that there were Afghans living on the base who knew he, Dickinson and Rivera were due to return home in a few days and that they were planning to have them executed…. I made calls to officers at Marine Headquarters to inform them of Gregory’s fears. I was unable to get a response. I was devastated. Do you know what it is like to hear your son telling you that he believed he would soon be murdered and knowing there is nothing you can do to help him survive other than to pray to God?”

This poor father’s prayers, as we know, were not answered. LCpl Gregory Buckley Jr. returned home in an American flag adorned Marine casket on August 13, 2012 and was buried in Arlington National Cemetery five days later, as his grieving mother, father and two brothers sobbed as he was laid to rest.

“Gregory will never be forgotten,” Buckley said softly to me. “He was a typical, happy, fun loving boy. But there was a very serious side to him. He was only ten years old on 9-11. But it affected him deeply. All he would talk about was joining the Marines to protect America from its enemies. With every passing year, he would become more excited about enlisting in the Marines. By the time he entered high school, a Marine Corps flag was hanging on the wall in his bedroom…. I was proud to see that for Greg, service to his country and his community were the most important things in his life. After he completed his service in the Marines, he planned to join the Suffolk County Police Department. This was not to be in the Lord’s plans. The flag still hangs in Gregory’s room. What only is left for me now is to find for justice for my son and his comrades.”

But to Buckley’s anguish, that justice more than eighteen months after the day of the three murders still appears to be light years away. Chief Jan was detained as a suspect, but then without explanation was set free after two weeks of confinement. It looks now as if he will never face criminal charges. Yet to Buckley, Jan’s involvement in the murders is beyond doubt. “It is clear that Jan ordered the murders. In Afghanistan, tea boys are slaves. They take orders from their masters. It is obvious that Jan ordered the murders and Ainuddin willingly carried them out. How could the Marine brass ever have allowed Jan to walk free?’’

Buckley also fears that Ainuddin, who reportedly repeatedly screamed, “I did Jihad” as he was being subdued after murdering our 3 young Marines, might also be allowed to walk free, unless immediate action is taken. “We want to have Ainuddin tried as a terrorist in US Federal Court”, Buckley explained. “We have contacted officials in the office of the United States Attorney of the Eastern District of NY to request that they prosecute this case. We still have not received any affirmative response to our request. It remains our greatest fear that if Ainuddin’s fate is left to the Afghans, he will go free.”

If the story of the murder of these three American heroes ended with Buckley’s last words, it would probably remain enough to make all Americans scream for justice. But the story grew even more unsettling when an unforeseen twist to this tragedy recently surfaced.

Buckley was to learn that a 32 year old Marine Reserve Major named Jason Brezler – who had already been back home working as a FDNY firefighter for two years after his return from his tenure of service in Iraq and Afghanistan – had received an email marked urgent in late July 2012. The e-mail had been sent by a Marine officer from Greg’s FOB. The officer (who for legal reasons for now must remain unnamed) had observed Jan for several months and had become suspicious of him. Knowing that Jan had been police chief in the town of Naw Zad in 2010, a town about three hundred miles north of Helmand Province, the same time that Major Brezler served there, the concerned officer asked Brezler to inform of all he knew about Jan.

Brezler knew a great deal; and what he knew left him in shock when he learned Jan had been allowed to be a police chief anywhere else again. He sent the officer a reply e-mail stating he and many other Marines on the base in Naw Zad believed that Jan was a pedophile and were all but certain that Jan had been working as a spy for the Taliban. Brezler added that the provincial governor of Naw Zad had fired Jan from his position as police chief, based upon those allegations.

The officer immediately presented Brezler’s email to his superiors. However, they apparently never acted upon it. Such inaction remains incomprehensible to Buckley. “How could they have continued to allow this monster from walking freely upon the base, having been informed that he was suspected to be a child molester and an enemy spy? If they had acted correctly and immediately banned Jan from the base, my son and his two friends would be alive today.”

What is also incomprehensible to Mr. Buckley is how he obtained this news in the first place. He was informed of this new revelation not by the Marine Corps, but rather by NY Congressman Peter King. King himself learned of this story through his close friend, retired FDNY Capt. John Vigiano, who is Major Brezler’s godfather.

Vigiano has a first hand understanding of the horrors of terrorism. Two of his sons – one a police officer the other a fireman – were murdered on 9/11. Vigiano immediately called King for help when he learned that his godson Brezler would be facing a Marine Board of Inquiry this coming spring. And King, when he learned the names of the three murdered Marines associated with the case, contacted Buckley.

From his conversation with King, Buckley learned the perplexing charge against Brezler: When responding with obviously necessary speed to that urgent email sent from the officer in Greg’s FOB in Helmand Province, Brezler unintentionally committed a minor, purely inconsequential security infraction. And Rep. King, who has become a strong supporter of Brezler, also told an incredulous Buckley about the punishment Brezler faces: A permanent judicial discharge from his beloved Marine Corps Reserves.

“How is all of this possible,” Buckley asked. “Jan is a free man today. Ainuddin might also soon walk free. And Major Brezler, the man whose warning, if heeded, might have prevented these two monsters from carrying out their murders, faces disciplinary action. How can the government of the United States of America allow this to happen?

« PreviousYOU HAVE A VOICE…USE IT!
Next »Club Christmas/Chanukah Party Featuring Great Food, Friends and Speakers