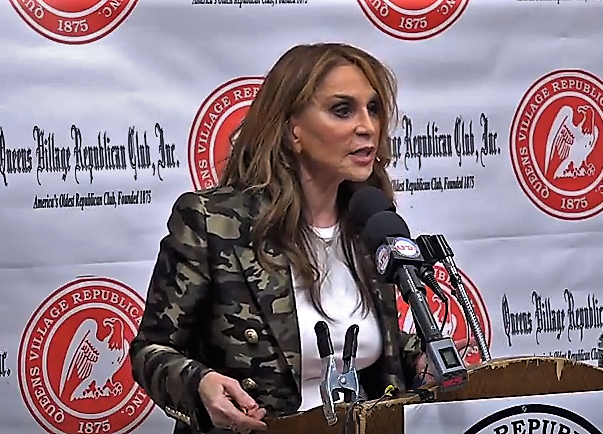 Pamela Geller was the featured speaker at the February 1st Book Event for her new book, Fatwa: Hunted in America, the chronicles of her courageous fight for freedom all across America against the fake righteous bastions of the left, and their allies, the jihadists.

Pamela Geller has been called the Joan of Arc of the counter jihad movement and her critics call her the most dangerous woman in America. She says truth is the new hate speech, and she has been targeted by jihadists and leftists since she stood up to speak the truth and defend our most fundamental right, our freedom of speech.

She is an author, founder and publisher of the online Geller Report, president of American Freedom Defense Initiative and Stop Islamization of America. She is well known for leading the protests at the Ground Zero mosque and stopping it from going forward. She launched ad campaigns in NYC subways and throughout America to support Israel and defeat jihad, and was censored by fainthearted government officials. She fought and won free-speech lawsuits against the MTA and all across America.

Pamela Geller was the American Patriot of the Year honoree at our Lincoln Dinner a couple of years ago. We honored her for her great courage in protecting our fundamental freedom of speech. She has been an inspiration to many people who have been greatly encouraged and inspired by her courage to stand up fearlessly for freedom, and make a difference.