Bay Terrace, NY:  David Bressler, candidate for New York State Assembly in District 26, is proud to have received the endorsements of three major political parties in Queens.  He is the endorsed candidate for the Republican, Conservative and Reform parties. After the Republican and Conservative petitioning processes, he will appear on the three ballot lines, giving Northeastern Queens voters a varied choice to elect Bressler to the Assembly seat, and send incumbent Assemblyman Braunstein into retirement. 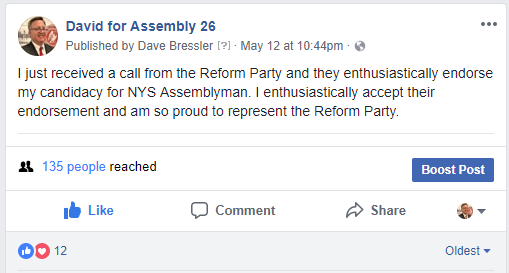 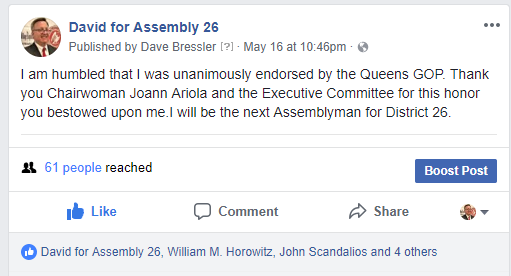 In light of the three endorsements, Bressler is calling on Republicans, Conservatives, Reform Party members, independent voters, moderate Democrats – everyone, to join him in the fight against the progressive left. Mr. Bressler said: “This election is not about Republicans versus Democrats, but the progressive left against everyone else. The law-abiding taxpayers are sick and tired of politicians appeasing their leftwing base granting felons the right to vote, closing Rikers and planning community jails, abolishing the SHSAT, while the wasteful spending and corruption in Albany, and the people’s interests are neglected. I will take action every day to fight against the wasteful spending and corruption, and fight for the people’s interests – to fill the people’s pockets, not the politician’s pockets.”