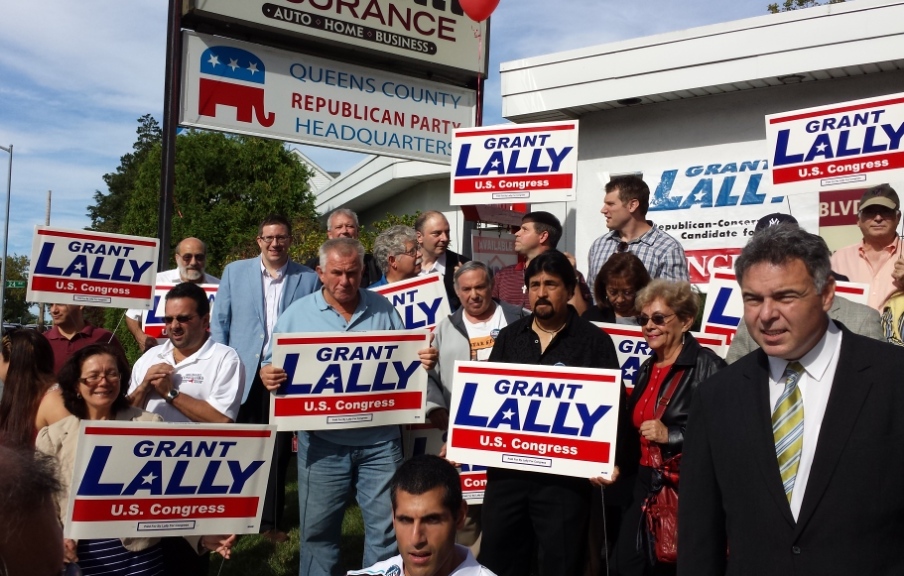 On the anniversary of the U.S. Constitution, September 17th, 2014, the Queens Village Republican Club is proud to throw its full support and enthusiastic endorsement behind Grant Lally. Mr. Lally is the Republican, Conservative and Libertarian candidate for New York’s 3rd Congressional District, a huge district which stretches across three counties from the Northeastern end of Queens, through Nassau and Suffolk. Lally is polling well in the district and enjoys tremendous support in the immigrant community as well as from traditional hard working middle income New Yorkers.

Kicking off the event that doubles as a remembrance of the anniversary of the U.S Constitution and fundraiser in support of Mr. Lally are honored guests, NYC Councilman Eric Ulrich, New York State GOP Strategic Advisor John Burnett, Brooklyn Senator Marty Golden and many others. This event, headlined as the “Constitution Day Reception for Grant Lally” hosted by the Queens Village Republican Club will take place at the following venue:

Grant Lally is an accomplished attorney serving the people of both Long Island and New York City and serves as National Co-Chairman of The Irish American Republicans. He is married to Debra Misir, and has been a resident of the North Shore towns of Oyster Bay and Huntington for over 30 years. Lally understands the need for change in this district in order to reclaim low taxes, repeal and replace Obamacare, and provide solid leadership in the U.S. Congress by proudly representing the interests of his future constituents.

Grant Lally is a dynamic leader who believes in a strong national defense as well as the safety and security of his local constituents. Lally is an ardent supporter of the State of Israel and believes we should support our local police departments, and return to local control of our schools.

The polls show that the 3rd District is one of the most Republican in the region in an election cycle that promises to be a Republican “wave” all across New York State and our nation. With President Obama’s sinking poll numbers, voters in the district are ripe for change. Grant Lally is imminently qualified and prepared to take on the challenge and champion the issues for his district, whose residents yearn for real leadership, intelligence, breadth of knowledge and experience that Grant Lally can and will provide.