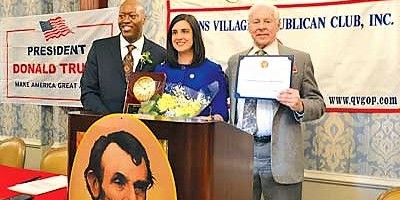 The Queens Village Republican Club had a lot to celebrate during its annual Lincoln Dinner on March 19. 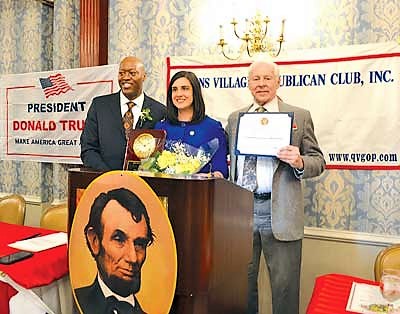 This year’s dinner celebrated the club’s 142nd anniversary, continuing its run as one of the oldest Republican clubs in the country. But it took on broader celebratory overtones as speakers and guests lauded one of the most significant Republican victories in recent history—the election of President Donald Trump.

The tables were decked with red, white and blue tablecloths and balloons. Banners adorned the walls, reading “President Donald Trump, Make America Great Again.” The club issued awards to several community leaders and an energetic crowd of hundreds cheered along to speeches that praised Republican values and victories.

“The purpose of this great event is to celebrate the father of the Republican Party, Abraham Lincoln, and also today is a celebration of the victory—the great victory—of our President Donald Trump, and the new era to make America great again,” said Club President Phil Orenstein to cheers.

LaValle praised Trump’s promises to help inner cities and poverty-stricken neighborhoods, arguing that many Republicans have ignored those areas because they didn’t see opportunities for votes. He stressed that the country could only grow if those areas grow with it and that Republicans could stand to gain in traditionally Democratic places like New York City if those places improved under Trump.

Many pushed back against what they described as a media narrative that Republicans aren’t diverse, pointing to the night’s attendance, which comprised a wide range of ethnic groups, including a strong showing from the Pakistani Christian community.

“Mainstream media wants to make us look like we’re all radicals, but I look around and I see young women, old women, young men, old men, black, white, yellow, green, orange—I see all the colors of the rainbow,” said a representative for U.S. Rep. Lee Zeldin (R-Patchogue).

Malliotakis took a hard stance on immigration, claimed that de Blasio’s efforts to be a “sanctuary city” prevented law enforcement from aiding federal deportation authorities in investigating undocumented immigrants who commit a wide range of crimes.

De Blasio was a punching bag throughout the night—drawing boos at even the mention of his name.

“I do believe in unity, but there’s one exception: de Blasio has to go,” said event emcee John Burnett, a conservative commentator.

Mayoral candidate Michael Faulkner, in a passionate address where he claimed to have solutions to “desperate times” in New York City, led a “dump de Blasio” chant.