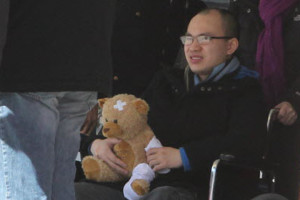 NYPD Officer, James Li, a rookie officer survived a shooting this week allegedly by a cop-hating fugitive. Two off-duty EMTs helped save his life  and he was released from the hospital on Friday. Frederick R. Bedell Jr., a resident of Glen oaks Village, wrote the following letter published in the New York Post, which echoes all of our sentiments and praise for our heroic NYPD and EMS workers.

Officer James Li a rookie cop just out of the Police Academy was shot and wounded in Brooklyn. He was the first NYPD officer shot and wounded this year. I find this quite troubling and sad but I commend officer Li for trying to serve and protect the community from most dangerous criminals on the streets. I would also like to praise the fast acting EMS workers, Khadija Hall and Shaun Alexander who came to the Officers aid. There are too many guns on our streets that are in possession of most dangerous perpetrators who’s egregious acts have taken its’ toll in terms of deaths and injuries. Yet if it not for the bravery and fortitude of our finest and those EMS workers who tend to their wounds, those with evil intent would surely gain the upper hand. Our Finest and our EMS workers have truly made New York and America proud.