We are delighted to announce that Captain James Van Thach, U.S. Army (Ret.), a highly decorated United States Army veteran, will be our featured speaker at the March 6th Queens Village Republican Club Meeting. He will discuss his service and sacrifice to our nation as a soldier who was wounded twice in the line of duty in Iraq. He is a Bronze Star and Purple Heart recipient, and is the first Vietnamese-American to become an advisor to the New Iraqi Army. In recognition of his service, Captain Thach was given the honorary title of Brigadier General by the Iraqi government.

Captain Thach, a native of Bellerose, Queens comes from a family with a long history of dedicated military service to our nation. His father, Lt. Col. John Peterkin was recently honored as the Veteran of the Year for his valiant service in World War II, Korea and Vietnam, at the glorious Lincoln Day Dinner. Captain Thach was proudly in attendance and used the opportunity to discuss his ideas and initiatives on behalf of wounded veterans with Rep. Peter King, Councilman Ulrich and other public officials. As a Veteran’s Advocate with Wounded Veteran Initiative of Canine Companions for Independence (CCI), Captain Thach will be discussing some of these initiatives with the Club as well. 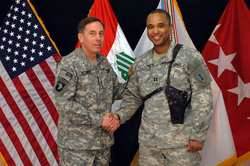 Here is some background information on Captain James Van Thach, in order that we can become acquainted with this courageous young man’s history and heroic service to our nation. His steadfast spirit of service and sacrifice is something from which all Americans can take a lesson.

After graduating from Touro Law School, Captain James Van Thach volunteered for a two year tour of duty in Iraq where he was first injured in an IED explosion. After recovering from those injuries, he was injured again during a rocket attack, which exploded less than 20 meters from where he was standing.

In an interview Captain Thach explained why he chose a dangerous job as an Infantry Officer in active combat as a Military Advisor in Iraq, and turned down numerous lucrative private sector job offers as an educated Law School graduate of Touro Law Center.  Captain Thach stated:

“As a Vietnamese-American, I personally feel in my heart and soul the sacrifices of life, along with the mental and physical scars suffered by both United States and South Vietnamese servicemembers who fought to defend South Vietnam against the Communist aggression of North Vietnam.”

“I will never forget and will always honor the men and woman that served in our military to defend our nation and our allies around the world, that have fought with our great military against Terrorism, Communism, and Fascism.”

During his tour of duty in Iraq, Captain Thach was awarded the Joint Service Achievement Medal for establishing a military base called Combat Outpost Shocker. He initiated and supervised the construction of the $7.1 million forward operations base close to the Iranian border in order to improve border security and stop the flow of Iranian support for Iraqi insurgents. The base succeeded in saving thousands of lives in Iraq from terrorists and the Iranian Revolutionary Guard from Iran. Captain Thach’s work on this and other projects that significantly improved the capabilities of the Iraqi Security Forces led him to be selected as the only foreign Officer in Iraq to be awarded the Honorary Iraqi Army rank of Staff Brigadier General on April 15, 2008. 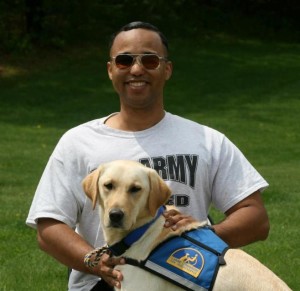 Captain Thach, retired from the United States Army in March 2009, and then decided it was time to return to the war zone on Operation Proper Exit. It is a program sponsored by the Troops First Foundation which stages a meet-and-greet tours to numerous forward operating bases throughout Afghanistan with a group of wounded warriors. They speak to hundreds of military men and women about their combat experiences and healing from their traumatic combat injuries.

In May of 2012, Captain Thach was invited to participate in Team Training at Canine Companions for Independence in Medford, NY. He was matched with his service dog and now constant companion, Liz. He has been interviewed with Liz on CBS and FOX News and has been a tireless supporter and spokesperson for Canine Companions Wounded Veterans Initiative speaking to other wounded veterans about the difference an assistance dog can make in their lives.