“ It goes back to 9/11.  I was in my house studying for my law school classes…. I turned on TV to take a fast break…. I saw the images of the first plane hitting the tower…. then the second plane hit… I learned that my country was under attack from foreign terrorists. I wanted to honor all the people who had been murdered on 9/11 and do my part to protect America from ever again suffering such a heinous attack…. I felt the way to accomplish that would not be by sitting behind a desk, but by fighting the enemy face to face in the battlefield.” 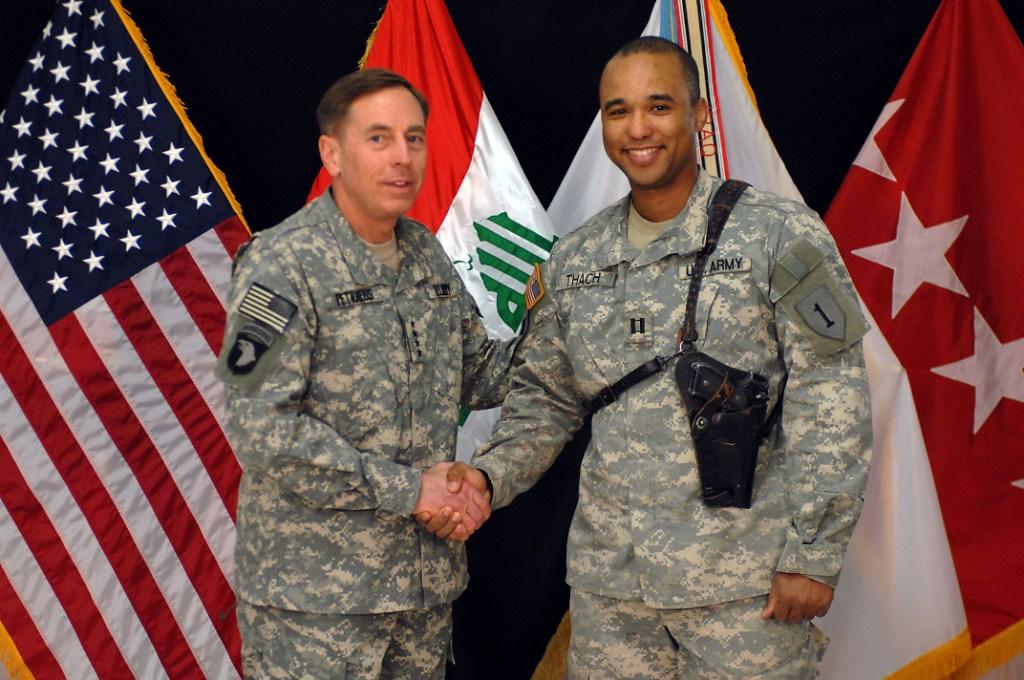 It can be reasonably assumed that upon their graduation most of the several hundred students of Touro Law School’s Class of June 2002 were preparing to take their upcoming bar examinations and looking forward to starting their careers in the public or private legal sector once (and if) they passed them.

Such as a general rule is the professional path followed by most law school graduates across America. But that generalization has its exceptions, a most notable one is Captain James Van Thach.

Thach, who had served in the Army reserves beginning his 1994 freshman year at St. John’s University, was commissioned a Lieutenant in 1998. In 2002, because he had a law degree, the Army offered Thach the position of attorney within the Army’s legal division.

Thach, however, instead chose to volunteer to go to Iraq to serve in the role as an Infantry Officer Military Advisor to the Iraqi Army’s combat forces in the war torn streets of Bagdad. When I had the great honor of interviewing the 38 year old Captain James Van Thach, who wore on the outside of his white army uniform the medals of the Bronze Star and Purple Heart he had been awarded for his service to his nation from the Army, as my guest at dinner in an Italian Restaurant located close to his home in Queens NY this past Thursday, I asked him to explain why he had made that choice.

“ It goes back to 9/11”, he told me. “ I was in my house studying for my law school classes…. I turned on TV to take a fast break…. I saw the images of the first plane hitting the tower…. then the second plane hit… I learned that my country was under attack from foreign terrorists. I wanted to honor all the people who had been murdered on 9/11 and do my part to protect America from ever again suffering such a heinous attack…. I felt the way to accomplish that would not be by sitting behind a desk, but by fighting the enemy face to face in the battlefield.”

So, as he had planned five years before, on March 1st 2006, 3 years after being sworn in as an Infantry Officer, Thach was in Baghdad fighting terrorists. And doing more than just fighting, he added. “ We were also engaged in humanitarian aide to Iraqi civilians, arranging medical and dental care at schools and mosques, providing blanket and winter coat drop offs for children and adults.”

And then, in early June 2006, less than four months after he had first arrived in Iraq, Thach was riding with three American soldiers and one Iraqi civilian interpreter in his Humvee in the dirt roads in the back sections of Baghdad when the vehicle exploded while driving over a terrorist planted IED. The strength of that explosion lifted the Humvee more than two yards off the ground and set-off a gut wrenching smoke reportedly seen from miles away. Recalling that day, Thach stated, “ It was a horrible shock. Such an explosion leaves you at first not knowing what hit you. We were all injured and in pain, but we were Infantry soldiers, riding in an armored up Humvee made to take such a heavy hit. That and with the help of God, we all survived.”

“ Later that day”, Thach continued, “ I told the medic treating me that I had a headache, some pain and was nauseous. He told me to take some aspirin and get some rest. I did and was back to fight the war the next day.”

Then 7 months later, in the first week of February 2007, just one month shy of his completion of his first year of service in Iraq, Thach suffered a second injury, this one far more severe than the first. That cold February day was, at first, an uneventful one. “ I was walking with my Iraqi counterpart”, Thach recalled, “ discussing some routine military matters…. Then suddenly I heard the sound of the explosion of what I later learned to be 12-foot- long enemy Katyusha rockets. One rocket landed twenty meters from where I was standing, blowing me unconscious to the ground…. The next thing I remember I woke up in an Army Hospital in Baghdad.”

Thach stayed in that hospital for only one day. The following day he was flown three hundred miles to a medical center in Balad Air base in northern Iraq. The doctors there informed him that their plan was to stabilize his injuries and then have him transported to an Army hospital in Landstulh, Germany, where, they told him, his injuries could be most effectively treated.

But Thach didn’t want to accept that plan. “ That hospital is primarily for soldiers who have sustained the most severe injuries”, he explained. “ I looked in the mirror and saw that I while I was in pain I still had my four limbs. Flying in the same plane to arrive in the same hospital with American soldiers missing arms, missing legs, lying unconscious would be to dishonor their sacrifice to our nation, I believed.”

Acting very quickly, Thach found a sympathetic member of the medical staff. She recommended that Thach be allowed to return to Baghdad in modified desk duty and have his injuries treated there. 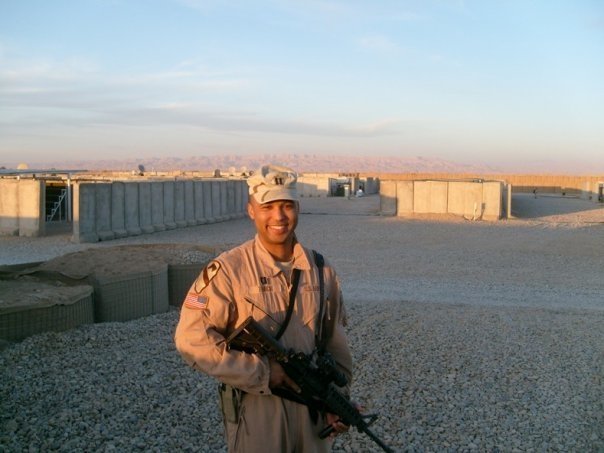 Captain James Van Thach at Combat Outpost Shocker,
in Iraq a few miles from the border of Iran. December 2007

This recommendation was approved by the military command, and Thach, seemingly beyond all reasonable belief, just after one week that he suffered that second injury, was assigned in his new modified duty role to help coordinate from his office in a military base in Baghdad the building of a new fort several miles east, Combat Outpost (COP) Shocker. For his work in help constructing COP Shocker, which was built as an outpost used to stop the flow of weapons supplied by Iran to Iraqi terrorists, he was awarded the Joint Service Achievement Medal and later met and was congratulated for this service by General David Patraeus.

During the entire time that COP Shocker was being built Thach was enduring severe pain in his neck and back from those two attacks but was able to cope with it by taking the morphine his doctors had prescribed. But those injuries were eventually to catch up with him. As Thach described his ordeal, “ I returned to Fort Benning {Georgia} in the middle of April 2008 as scheduled….{ While there} I felt the pain in my neck and back worsening every day, I was also experiencing terrible migraine headaches. The morphine was no longer able to control all the pain…. The migraines were also causing me to have problems with my vision…. And I was continuing to have nightmares about those two attacks that made it very hard for me to sleep. After six weeks of this, I realized I couldn’t fight it alone any longer…. I went to the hospital and wound up staying there for two months. I went through many tests and regular sessions of physical therapy. But there was no cure for my injuries. In March 2009, I was medically retired from the Army. The military had become my life. I was shattered.”

Thach’s physical and mental condition continued to further worsen after his retirement. He needed a cane to walk. He was unable to drive a car or even bend down to put on his socks. His vision was impaired. He encountered difficulty sleeping and became, at times, possessed with thoughts of suicide. The side effects of the 20 pills he was taking to fight this physical and mental pain were wreaking havoc on his body and mind.

But Thach – whose American father while serving as a combat officer in Vietnam in the early 1970’s met, married and took back to America the native Vietnamese woman who was later to bear him- was eventually able to find the help, support and inner strength that enabled him to survive and move forward with his life. “ I realized that the people who could help me most were those I was living closest to…. I turned back to my mother and father for help and accepted their unconditional love and support”, he told me.

And then Thach mentioned Liz, the Labrador-Retriever he was given as a gift by the Wounded Veteran Initiative of Canine Companions for Independence (CCI). “ Liz does so many chores for me”, said Thach, “ including when I accidentally drop my pills on the floor, she’ll pick them up. And yes, the value of the love and kindness that she shows every day can never adequately be put into words”.

And there is an ancillary benefit that Liz provides, he added. “ I am engaged in several programs that benefit wounded warriors…. One of them is with CCI. Liz showed me how important a role a service dog can play in the lives of wounded warriors, {so} I am volunteering with CCI to help supply trained service dogs to wounded veterans across America…. I have learned that helping my fellow wounded veterans has given me extra strength and created additional purpose to my life.”