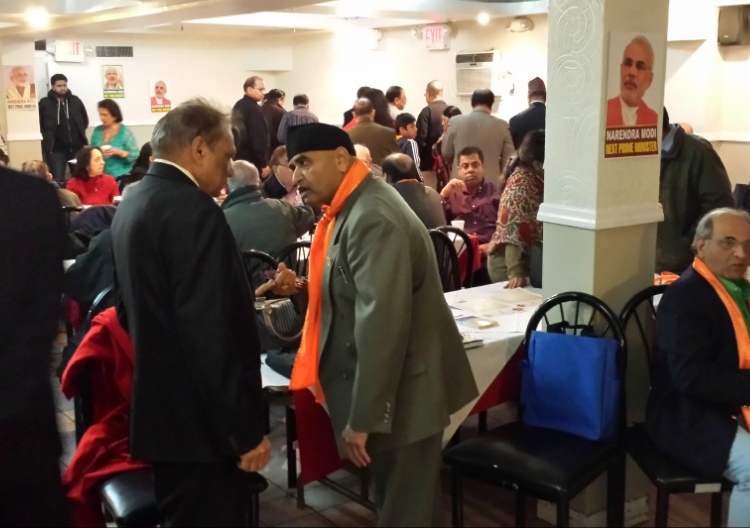 “Getting registered to vote in New York elections and taking political action is the way to be in control of your own destiny, otherwise your destiny will be controlled by others. The Indian people have a powerful voice to control their own destiny here in the City of New York, but they haven’t been using it. ” 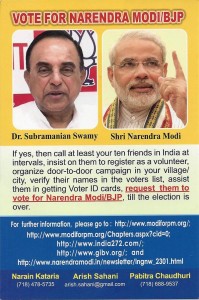 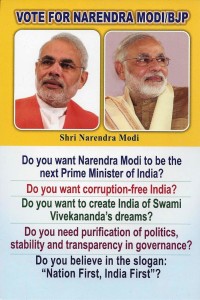 Over 100 businessmen, dignitaries, professors and local residents from the Indian community packed into the basement meeting room of Santoor Restaurant, Glen Oaks, NY to share their views to how to help Shri Narendra Modi win India’s election campaign for Prime Minister in May 2014. This event of the Indian American Intellectuals Forum was organized as a Chai Pe Charcha (Talk on Tea), which is equivalent to an Indian Tea Party event. 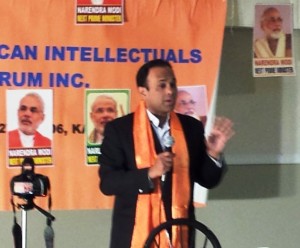 Joe Concannon, Phil Orenstein and Jacob Cherian were invited to speak at the event representing the Queens Village Republican Club. The sentiments in the room were certainly in alignment with the messages of both conservative Republicans and the Tea Party since the biggest applause line of the day was that “Politicians are like diapers. When they’re there too long they stink and have to be removed.” 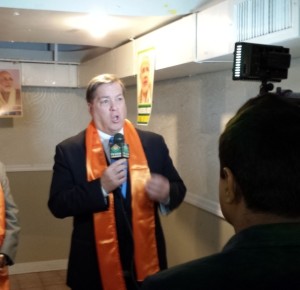 Narendra Modi, the BJP Party’s candidate for Prime Minister is the current Chief Minister (CM) of Gujarat, a state in the North-West coast of India. His economic policies created a high rate of economic growth in Gujarat, which is the reason behind his supporters’ passionate hope for his leadership as Prime Minister that they expect will transform India into an international powerhouse. He is the leader, it is believed, who can steer India to the heights of economic prosperity as he did in Gujarat, and put India on the road to becoming the world’s next superpower. 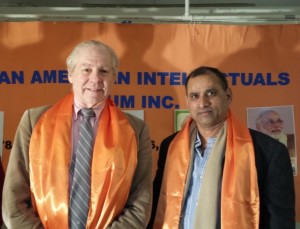 The BJP Party is like our Republican Party. Modi and the BJP stand for the principles of hard work, self-reliance, small government, privatization, free enterprise, nationalism, and strong national defense. Money is created from the sweat of laborers, not from government bureaucrats. Indian society must unite, develop the country and become a closer partner with America.
The opposition Party, the Congress Party is much like the Democrats. Their leaders talk eloquently about the sufferings of the poor, and do nothing to help them. The nation under the ruling Congress Party, has been led by the long tenure of authoritarian political dynasties of Nehru and Gandhi. The uneducated masses have traditionally voted for the popular sounding names until recently. Now that India has become so steeped in corruption, chaos and stagnation, the people of India are crying out for positive economic and social change, and Modi seems to be the likely champion of the economic prosperity of the burgeoning society in the upcoming election. 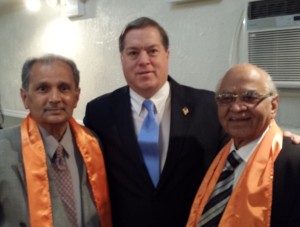 Former City Council candidate, Joe Concannon implored the crowd to get involved in local politics and issues, not only Indian politics. Getting registered to vote in New York elections and taking political action is the way to be in control of your own destiny, otherwise your destiny will be controlled by others. The Indian people have a powerful voice to control their own destiny here in the City of New York, but they haven’t been using it. He encouraged everyone to take action. Queens Village Republican Club President Phil Orenstein and local businessman, Jacob Cherian encouraged everyone to get involved with the Republican Party of Queens since it is essentially the same as BJP in India. 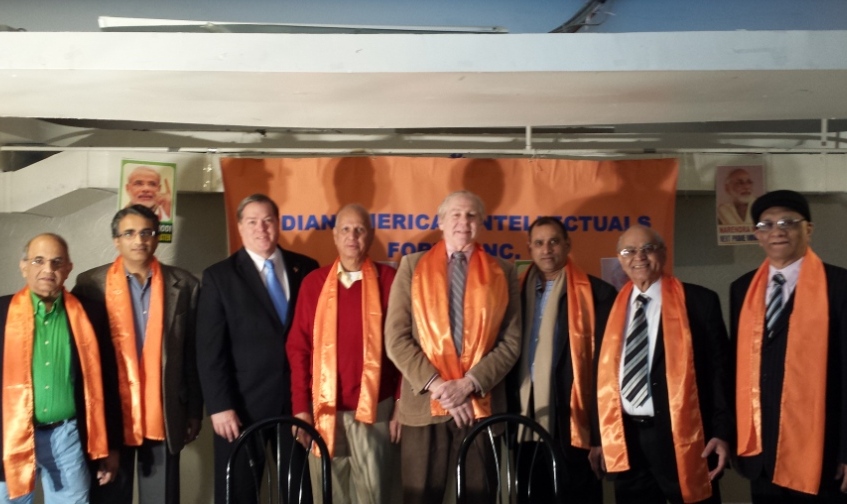 « PreviousCaptain James Van Thach: An American Hero
Next »WHAT IS COMMON CORE?