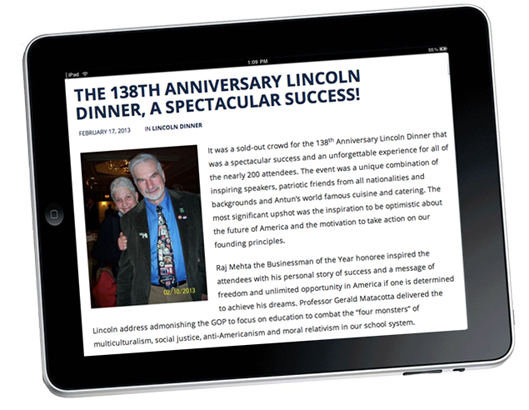 Enjoy the latest news and events

Available on your computer, tablet or any mobile device 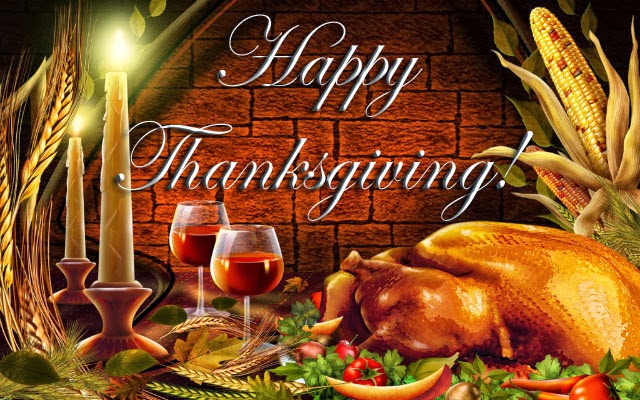 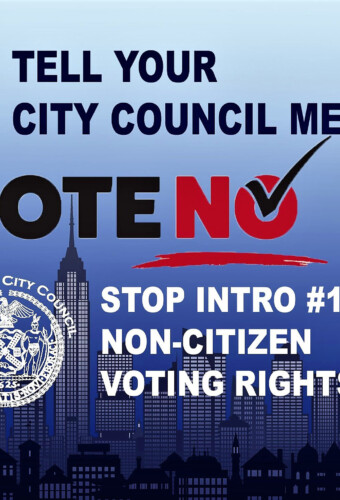 A Call to Action: Stop the Non-Citizen Voting Rights Bill!

We must defeat New York City Council Intro #1867. Contact your local City Council members and all elected officials. Call, visit, and write to them about the true meaning of citizenship and demand that they vote ‘no’ on this bill. 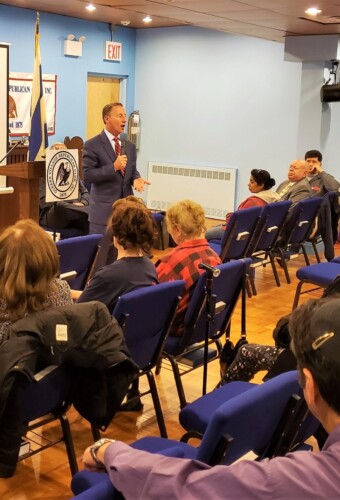 Maureen Grey, guest speaker at the November 4, 2021 Queens Village Republican Club meeting, is a neighborhood historical preservationist, lifelong educator, and was a teacher at St. Joseph Parish Day School. She is leading the fight to landmark St. Joseph’s Episcopal Church and save it from demolition. She told the story of a beautiful church that many Republican club members were parishioners of since its inception.

Professor Joseph Cheruvelil, guest speaker at the November 4, 2021 meeting of the Queens Village Republican Club, speaks lucidly about the Conscience of a Conservative. The professor is a popular conservative luminary who taught many years on the faculty of the English Dept. of St. John’s University. His book “A Passage to America” is an autobiography of Professor Cheruvelil, who describes himself as “a Catholic in religion, a Hindu in culture, a conservative in politics, and an eclectic in taste.” 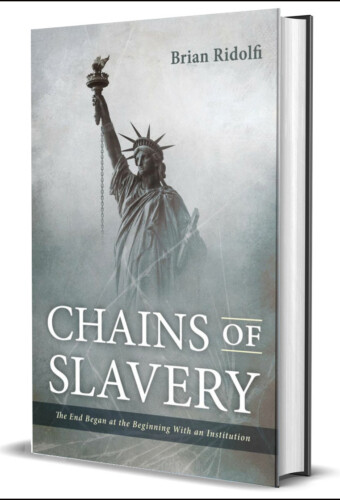 Op-Ed: Frightening Forecasts In The Futuristic Novel “Chains Of Slavery” That Have Already Come True In America

GREAT NECK, NY – If you’re searching for an enjoyable, relaxing and easy to digest book, which you hope will take your mind away from the current threats to our basic American freedoms posed by the leftist elite in the government, the mainstream media, universities and big tech, don’t read “Chains of Slavery.’’

Or at least that was my initial reaction after reading the futuristic political novel, whose author, Brian Ridolfi, I interviewed over the phone from my Long Island office to his in the outskirts of San Francisco, just a day after I finished reading his 166-page tome.

“‘Chains of Slavery”’ is not a book intended to help you fall asleep at night,” Ridolfi, 47, acknowledged. “Rather, it is a cautionary tale, intended to warn Americans, that, as President Reagan once said, ‘Freedom is a fragile thing, and it is never more than one generation away from extinction.”’

Enclosed please find 155 pages of our Election Integrity Petitions. The people of New York State, particularly New York City, deserve free and fair elections. That is not the reality! We write to you in hopes that some steps can be made to change some of the laws regarding this most important process in our State.

We The people of New York need to have confidence in our elections. Without that, our democracy will cease to function. The New York State Legislature needs to focus on free and fair elections by passing common-sense measures and safeguards to ensure our elections are secured and voter fraud is prevented. The people of the State would be better served with a “consumer-oriented” agency that in its mission aims to promote, educate and inform prospective candidates seeking to be party and public office holders. This would stand in stark contrast to the current exclusionary tactics now at play at the New York City Board of Elections that seeks to discharge candidates for petty violations and prohibiting them from gaining access to the ballot.

“On Election Day, see that every Whig is brought to the polls”

We are witnessing an unprecedented assault on our freedom and way of life as Americans. Vaccine mandates have infringed on our freedom to choose. Our system of fair and honest elections has been corrupted. A small minority of LGBTQ activists can change the rules and the language and impose their will on us all. The Justice Department brands parents speaking out against critical race theory at school board meetings domestic terrorists, while Antifa and BLM commit violence and mayhem with impunity. Refugees from the former Soviet Union and immigrants who fled communism seeking the torch of liberty and justice in America are terrified and losing hope. 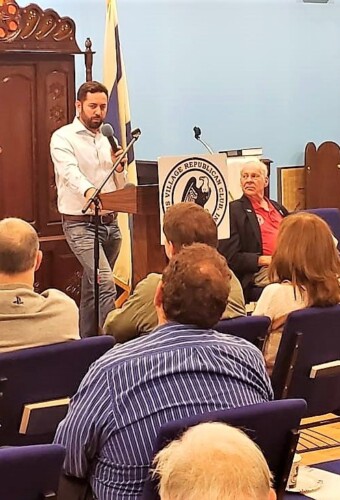 Rick Hinshaw discusses the urgency of voting NO on ballot propositions #1, #3 and #4, that threaten the integrity of our elections. Rick is the former editor of The Long Island Catholic and director of communications for the Catholic League.

Dr. Devi is a scientist and physician working on the frontlines of the pandemic for the past year and a half, working in pain management and treating combat veterans. Very compelling story about why she decided to run for Public Advocate in order to humanize a bloated inhumane city bureaucracy. Supporters poured donations into her campaign coffers, more than enough to meet the threshold for a televised debate with Democrat opponent Jumaane Williams which will air on Oct 19th.

Tony Herbert is running for NYC Public Advocate on the Conservative Party and Independent lines. Jumaane Williams, the current NYC Public Advocate, is the Democrat candidate for Public Advocate, who as a City Councilman, refused to recite the pledge of allegiance and was a supporter of FALN terrorist Oscar Lopez Rivera. Williams is also a supporter of BLM and defunding the police. Tony is a community leader, a former radio show host who cares about the people of NYC, and is a voice for the voiceless.

NYS Assemblyman Mike Lawler was the only Republican to flip a Democrat State Assembly seat in 2020. Mike served as Executive Director of the State Republican Party and advisor to Rob Astorino when he was Westchester County Executive. We worked together on Rob’s past gubernatorial campaign, and we are thrilled to have him scheduled to speak at our November meeting as a Republican candidate for governor of NYS. Mike is our pro-police, pro law and order, pro-fiscal conservative voice in the State Assembly, and leading the charge to break the One Party monopoly in NYS!

The future of New York will be affected by the voters choice on the Ballot Propositions #1, #3 and #4. Voters need to be educated to flip their ballots to the reverse side on November 2nd and vote NO! on these three Ballot Propositions that threaten the integrity of our elections. Please print out this flyer and distribute to all voters on your block. It should be part of every candidate’s lit drop to every voter in New York State!

Write and call your Congressman and US Senators today to release Lt. Col Scheller from military jail immediately. Lt. Col Stuart Scheller is a proud and dedicated Marine and patriotic American who served 17 years of multiple tours of combat duty. Lt. Col Scheller had the courage to demand accountability from his senior leadership following the devastating suicide bombing at Kabul airport which took the lives of 13 US service members in the wake of the disastrous withdrawal from Afghanistan due to the incompetence of President Biden, Defense Secretary Austin, General Milley and General MacKenzie.  Lt. Col Scheller was placed in military jail on September 27 and is being held without charges filed, for asking the questions which everybody was asking themselves, but were too scared to ask out loud.

The world is a dangerous place and that will never change unless we vote.  New York City General Election candidates, Curtis Sliwa, Anthony ‘Tony’ Herbert and Vickie Paladino are the ones to watch this cycle. While some may act as if the elections are over after the June 2021 Primary, there is an upcoming General Election on November 2, 2021.

As a matter of reality, the Biden Administration is doing business with the Taliban. And today, America is less safe than it was just one year ago. The current Administration should have ended the war and pulled out of Afghanistan, but America shouldn’t have left entirely. On the ground, in person presence in Afghanistan is crucial to America’s ongoing safety. Instead, America’s population is left to contemplate the unknown. To add insult to injury, and without adequate vetting, tens of thousands of Afghan refugees will resettle in the U.S. at the taxpayer’s expense, in addition to over one million illegal migrants that have already crossed the U.S. Southern Border. It’s pretty clear that the war against America is not over, internationally or domestically.