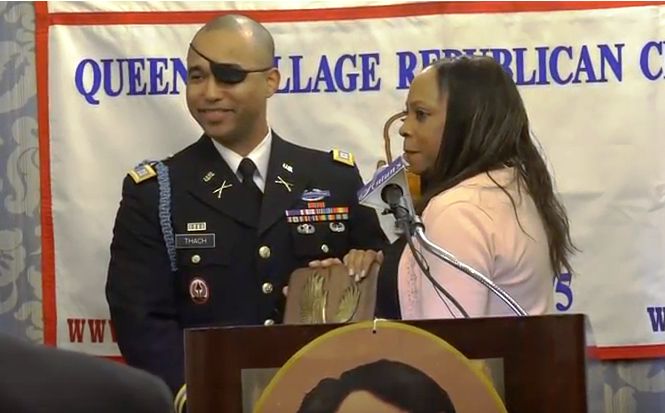 Captain James Van Thach (Ret.) U.S. Army, received the Rabbi Morton Pomerantz Veteran of the Year Award at the 141st Anniversary Licnoln Dinner. The presenter was Commander Bernadette Semple, a highly decorated wounded warrior herself. Captain Thach, a Bronze Star and Purple Heart recipient, who was given the honorary title of Brigadier General by the Iraqi government as an advisor to the New Iraqi Army, spoke passionately, as a Veteran’s Advocate with Wounded Veteran Initiative of Canine Companions for Independence (CCI) with his beloved service dog Liz by his side. He spoke about finding one’s passion in life and in one’s community, and to “never give up” the fight. He said to “find a pal” to help you through any difficulty. The passion that gives him strength and purpose in his life, as a Suicide Prevention Counselor and a pal to the numerous veterans and fellow wounded warriors he has met traveling throughout the nation and the world, is to share healing and encouragement with each and every one of them, because of the tragedy of approximately 22 American veterans committing suicide every day.

« PreviousLincoln Dinner Video: Fred Brown, Mentor, Friend and Lifetime Achievement Honoree
Next »Get out and vote on Primary Day