Ed Cox: From Eyewitness to History to NYS Republican Chairman

Ed Cox: From Eyewitness to History
to NYS Republican Chairman 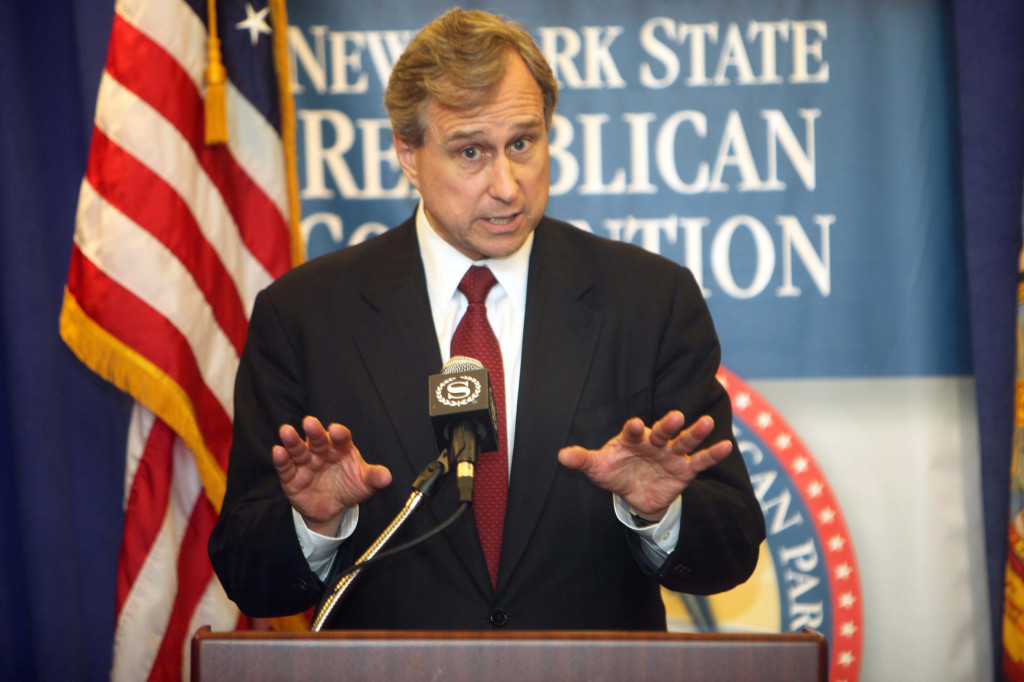 Try taking a guess where Ed Cox, the Republican Party Committee chairman for New York state, got his first job after graduating from Princeton University in 1968. If you guessed that this scion of centuries-old American families with names sounding like they came from the encyclopedia of the American aristocracy—the Finches, Coxes, Livingstons, and Delafields—began his professional career as a financier in a large pedigreed titled Wall Street financial firm, you would have offered a reasonable guess. But you’d be wrong.

Rather, Edward Ridley Finch Cox—who soon after Princeton was to go on to date and, in 1971, marry Patricia Nixon, the daughter of then-President Richard Nixon and in 1972 graduate from Harvard Law School—started his adult working career with the controversial liberal policy advocate Ralph Nader.

While Nader’s consumer advocacy group, labeled as “Nader’s Raider’s” by the press at the time, became leaders in the mainstream movement to protect the consumer, safeguard the environment, and defend worker’s rights, some of its members were also inhabitants of the far left, their anti-capitalist, anti-corporate America rhetoric growing more vitriolic as the years passed since Cox left the group in 1970. To their leader Nader, American companies and corporations were and remain responsible for, “All kinds of brutality in the name of buying and selling goods.”

Does today’s top, most visible and powerful NYS Republican official dismiss the time he spent with Nader as simply being the proverbial wasted years of his youth?

“No. There was a great deal of good that Ralph helped achieve,” Cox told me during an interview I recently conducted in his Manhattan law office. “Back in the late 1960s, Ralph pushed for automobile manufacturers to include air bag systems in all newly manufactured cars. It took almost 30 years to become the law of the land, but in 1998 airs bags became mandatory in all cars.”

Cox also credited his old boss for being a moving force behind the creation of the National Environmental Policy Act (NEPA), the first major environmental statute in the United States, passed by Congress in 1969 and signed into law the following year by Nixon.

“Ralph was instrumental in getting the discussion about the environment going from the beginning. With NEPA and the founding of the EPA (Environmental Protection Agency), government agencies became accountable for how their policies impact upon the environment. The result has become cleaner air to breath, purer water to drink, and cleaner oceans and rivers to swim in for all Americans today.”

Referring to his chairmanship of the New York League of Conservation Voters Education Fund (1995-present), Cox added, “I am proud to say that I remain an environmentalist to this day. And that going back to Theodore Roosevelt, environmentalism has been a mainstream Republican policy.”

Having served in a variety of important positions for three former Republican Presidents—Richard Nixon, Ronald Reagan, and George H. W. Bush—Cox, no doubt, is something of an authority on what is and what is not mainstream Republican positions.

Of the three, Cox told me, he worked most closely with Nixon, mainly on foreign policy issues. And so I began to query Cox about the foreign policy of his late father-in-law, America’s 37th President (whom throughout the interview he referred to as “President Nixon”).

Cox cited the détente with the Soviet Union, the establishment of diplomatic relations with China, and America’s support of Israel during the 1973 Six-Day War as the three greatest foreign policy accomplishments of the Nixon presidency (1969–1973). Listening to Cox’s recollections of Nixon’s foreign policy adventures became to me at first like taking a trip back in time to China in the early 1970s.

“At President Nixon’s direction, I traveled to the People’s Republic of China in late 1971 to help make arrangements for the historic trip that he was to take there in February 1972. President Nixon’s journey proved to be a great historical success, which I was able to witness firsthand. It was an incredible time. I remember seeing scores of broadcast media and print reporters following every move that the President and Mrs. Nixon, who accompanied him, made,” Cox recalled.

Repeating the still-famous phrase that “Only President Nixon could go to China,” Cox explained that he agreed with the old conventional wisdom that only a president with Nixon’s strong anti-communist credentials would have been able to convince the American public that reaching out to the largest and at the time most doctrinaire Marxist regime in the world would help lead to world peace without abandoning our allies.

“No reasonable person could have questioned President Nixon’s commitment to stopping the spread of communism throughout the world,” Cox reflected. “This reputation, he would often say privately, is what gave him the flexibility when the geopolitics of the region began to change—most notably with the People’s Republic of China and the Soviet Union involved in fierce border clashes in 1969—to normalize relations with China. … This new relationship with China dramatically altered the Cold War balance of power in the region. … It was no longer two communist nations allied against American interests. It was now China and America with shared interests, isolating and weakening the Soviet Union.”

It was this new feeling of weakness and fear of isolation, Cox contended, that led Moscow to become more open to discussions on how to normalize relations with the United States. “Less than four months after President Nixon went to China, he visited Moscow [in May 1972]. I was with him as President Nixon prepared for his summit with Leonid Brezhnev [the General Secretary of the Communist Party, the most powerful position in the Soviet Union].”

“It was clear to the President, [Secretary of State] Henry Kissinger, and basically every American official involved,” Cox continued, that “this conference was driven by Brezhnev’s fear that his country would be the loser if it were only China that had normalized its relations with America. … Both nations and the world turned out to be the real winners, as President Nixon and General Secretary Brezhnev reached agreements on greater trade between the two nations and achieved two watershed arms control treaties. … As a result the world, which during the Cuban Missile Crisis just ten years before faced the real possibility of seeing America and the Soviet Union waging nuclear war against each other, had become a far safer and more peaceful planet.”

The following year was also to develop into a crucial time for the Nixon presidency. On Oct. 6, 1973, Egypt, Syria, and nine other Arab states, launched an attack on the tiny nation of Israel. Caught by total surprise, as Arab leaders planned the attack to be on the same day Israelis were observing Yom Kippur, the holiest day in the Jewish religion, the nation in the first days of combat suffered devastating losses.

As Cox recalled, “In the first days of the war, Israel sustained damages in death and casualties. Israel had lost hundreds of pounds of essential supplies and ammunition, leaving the country in its most desperate situation since its founding. In their northern border alone, Syria outnumbered Israeli in tanks by 1,500 to 180. … [Israeli Prime Minister] Golda Meir telephoned President Nixon requesting an American airlift to replace lost supplies. She told him that the situation was desperate. … President Nixon immediately ordered a massive American airlift involving more than 500 missions in which hundreds of thousands of vitally needed materials were delivered. The rest, of course, is history. Israel won the war and survived, Thank God. … And Mrs. Meir throughout the rest of her life referred to President Nixon as ‘My President.’”

Even the 90 minutes that Mr. Cox generously granted me for this interview did not allow sufficient time to discuss Presidents Ronald Reagan or George H.W. Bush, both of whom he worked for and respected, but told me, never got to know well; nor did time allow us to discuss the current condition of the NYS Republican Party—the originally planned topic of the interview; and proper manners precluded me from bringing up the Watergate scandal that ended the Nixon presidency in 1973, just at the height of his greatest foreign policy achievements.

Robert Golomb (MrBob347@aol.com) is a nationally published columnist. He writes on a range of educational, cultural, and political topics.