Conservative Furor Against Cuomo Coming to a Head

“The Governor of NY has forgotten he is the highest representative of all the people of NYS, not just the one’s he agrees with….Religious freedom is a fundamental right of all New Yorkers and that elected officials, especially elected Catholics can’t pick and choose what part of the Catholic Faith they choose to adhere to.”

“Conservative Furor Against Cuomo Coming to a Head”
by Angelo Stagnaro 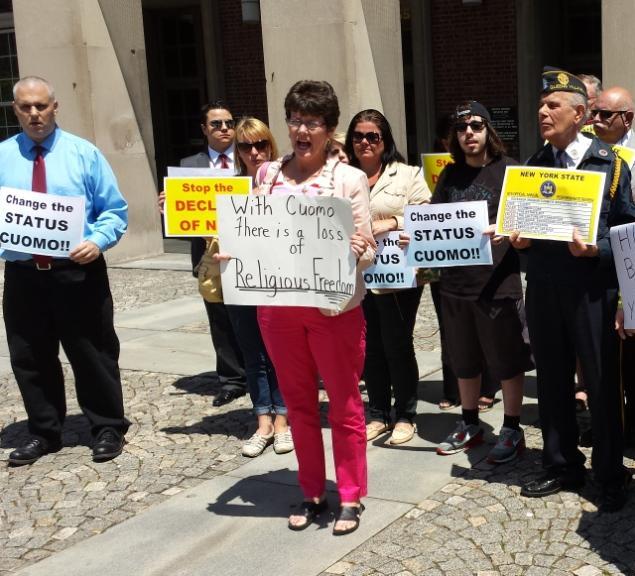 Catherine Donohoe, President Bridge to Life, speaks out about
the loss of religious freedom with Governor Cuomo

NEW YORK (CNS) – In what might signal a fundamental political shift towards more traditional values in New York State, a demonstration was held in New York City calling for a redress of Governor Andrew Cuomo’s public policies many of which are perceived as perniciously attacking Catholic values.

Cathy Sapeta, President of New Yorkers United For Kids, was one of the planned speakers at yesterday’s press conference on the steps of Queens County Borough Hall. She spoke about the effect of so-called “Common Core” curriculum, a hallmark of the Democratic governor’s educational restructuring, on Catholic Education:

“Common Core is about work force development – meeting a minimum standard,” said Sapeta. “A Catholic education has always aimed at challenging a child to meet their potential and to discover their vocation as children of God.”

According to Sapeta, there have been many anti-Common Core rallies in New York State with more being planned each week. Her organization plans to stump in all 62 New York counties by the end of the summer ’14. Microsoft founder Bill Gates is partially financing Common Core in what he has refered to as a ten-year experiment with New York State as a testing ground.

“The Governor’s assertion that religious Catholics and religious people of all faiths should leave the state because [he] doesn’t approve of our beliefs is arrogance. The Governor’s failing grade on religious freedom concerns the imposition of laws and policies emanating from both the Federal and State Government which focus on the HHS Mandate, which the Governor signed into law by Executive Order, which forces religious people to violate their beliefs. It forces all people no matter what religion they practice to put the government as the first priority and their personal beliefs as secondary.”

In a letter addressed to the parents of children in parochial school there, Diocese of Pittsburgh’s Bishop Zubik wrote, “The Diocese of Pittsburgh has not adopted the Common Core, nor have we adopted a curriculum based on it.” He continued writing, “Be assured that our Catholic identity is the core of our curriculum,” he added. “Our Catholic faith guides the selection of all curricula, goals, textbooks and other resources.”

In response to concerns voiced by Catholic parents regarding Common Core, The Cardinal Newman Society developed “Catholic Is Our Core” Project which provides Catholic parents, educators and Church leaders with guidance and resources in exploring the Common Core and concerns about its potential impact on Catholic schools and students.

A recent statement released by the Catholic Bishops’ Conference regarding this issue, the bishops emphasize the importance of cautiously evaluating the Common Core stating that these standards “should be neither adopted nor rejected without review, study, consultation, discussion and caution.”

The statement dispels the misconception that Catholic schools are required to adopt the standards. It did acknowledge, however, that some schools have already chosen to adopt or adapt all or part of the standards.

“[T]he Church freely establishes schools that intentionally promote the Gospel of Jesus Christ with the purpose of forming Christian men and women to live well now so as to be able to live with God for all eternity,” the statement read.

Mike Spedale, of Holy Family parish in Fresh Meadows, NY, attending yesterday’s meeting and spoke to Catholic News Service about his interest in how Common Core has affected his daughter’s parochial school which has already implemented the changes.

“Just last night, I was helping my daughter Katie study for a test. One of the things she had to know was that “text tile” [sic] machines led to the Industrial Revolution. However, she had no idea what a textile was. And though she knew that Eli Whitney invented the idea of interchangeable parts, she had no idea was that was. This Common Core is a joke. The school has so much information to cover, it has no choice but to teach to the test and give answers without actually explaining what those answers mean. My daughter knew everything she was expected to know for the test, but has no real understanding of how things in history fit together.

“In addition,” continued Spedale, “because Common Core doesn’t accept religion as part of a school’s curriculum, Catholic school days must be extended by 40 minutes to allow teaching of the Catechism.”

Cathy Donohoe, President of Bridge to Life, a crisis pregnancy center serving Queens County, NY, also addressed the crowd estimated at 50 individuals as to additional infringements upon the rights of Catholics in New York State.

“Governor Cuomo actions negatively affect the pro-life movement. He is presently pushing the Woman’s Equality Act,” said Donohoe. “The 10th provision in this act allows for abortion in the last month of pregnancy. Because he supports HHS Mandate, he supports our tax dollars paying for abortions and abortion causing birth control. He and the DeBlasio would like to close down our crisis pregnancy centers. They claim that because we don’t offer abortion that we discriminate against women in crisis.”

“Cuomo has let it be known that he could care less about religious freedom,” added Donohoe.

Joseph Concannon, a board member of the Queens Village Republicans, also spoke at the rally.

“Today’s failing grade on religious freedom concerns the imposition of laws and policies emanating from both the Federal and State Government which focus on the so called benefit earned without regard to faith of the individual,” explained Concannon. “It forces all people no matter what religion they practice to put the government as the first priority and their personal beliefs as secondary.”

Concannon stated, that the “Governor of NY has forgotten he is the highest representative of all the people of NYS, not just the one’s he agrees with.”

“For many people in New York State,” he continued, “personal religious freedom must take precedent before any government need to exercise control over its citizens. For this failing grade and the insensitivity of Governor Cuomo, he earns a failing grade. New York is where all are welcome and where all religions can be practiced freely without interference from the government.”

Concannon explained that “Religious freedom is a fundamental right of all New Yorkers and that elected officials, especially elected Catholics can’t pick and choose what part of the Catholic Faith they choose to adhere to.”