Kurdish freedom fighters, quietly allied with America, made international headlines this year when they liberated from the beastly rule of ISIS the Syrian city of Kobani in January, and again ten months later when they freed the Iraqi city of Sinjar. That rule which began with ISIS’ invasion of those two cities in late 2014 had been brutal:  Christians and Kurds in both cities had been murdered and raped in countless thousands. Their liberation by the Kurdish freedom fighters one year later had saved countless others from the same fate.  It was a liberation that, it was said by some at the time, was made mainly possible by the Kurdish/ American alliance. 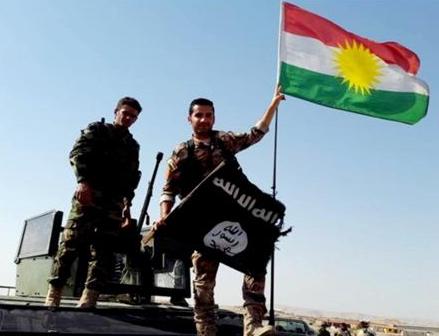 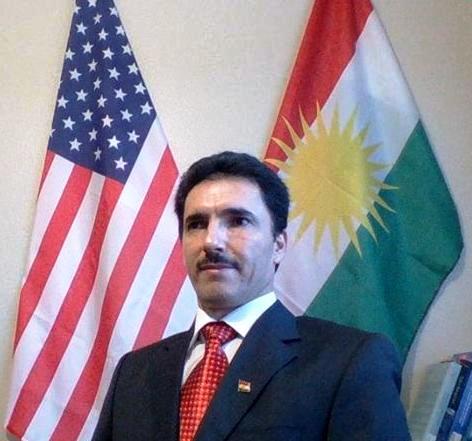 That alliance and the good will that it created for America with the Kurdish people did not begin a year ago with the fight against ISIS, but, rather  began 25 years before against another common foe, according to Azad- Jabbar Mustafa, the president of the Kurdish Student Association,  headquartered on the campus of Texas A&M.

“The origin of the love and loyalty we Kurds feel for America did not start  with our common fight against ISIS. It goes back to George {HW} Bush who in 1991 led the multi-national force to push Saddam Hussein’s army out of Kuwait in the Persian Gulf War”, Azad told me during a lengthy New York to Texas telephone interview conducted last week. “ While Bush decided to allow Hussein to remain in power, the overwhelming victory of America and her allies sent a message to the victimized and brutalized Iraqi Kurds that Hussein was not invincible”.

The historical suffering of those Iraqi Kurds- whose approximately six  million people currently living mainly in Kurdistan in north Iraq, constitute 17% of the middle eastern nation’s total population- has been fairly well documented.  The Kurds, an eclectic, peaceful Muslim sect, which can trace its middle- eastern origins back 4,000 years, were among the groups singled out for destruction by Saddam Hussein.

That destruction began in 1983 when Hussein’s regime exterminated 8,000 only male followers of the revered Kurdish anti- Hussein leader Mustafa Barzani. In 1986, three years later, the genocide became even deadlier with Saddam’s version of the SS using chemical weapons to kill more than 5,000 Kurdish men, women and children in the ancient city of Halabja.

Despite worldwide condemnation, that genocide was to continue. In 1988 – in what became known to the world as the Anfal Campaigns- Saddam’s murderers, scouring Kurdish communities throughout the nation, captured,  imprisoned and then murdered 180,000 Kurdish civilians. Hussein’s last act of genocide was to be committed in 1991.  In what some in the middle – east saw as retaliation for his defeat in Kuwait- the dictator ordered the slaughter of between 20,000 to 100,000 Kurdish Iraqis, creating from the terror of this slaughter hundreds of thousands of refugees fleeing their cities and villages for the temporary safety of the isolated high mountains of neighboring Iran and Turkey. 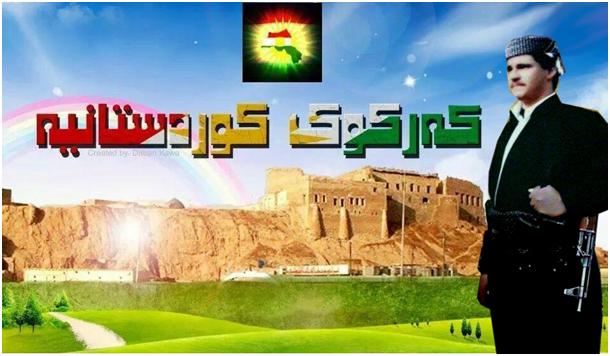 One of the people slaughtered in 1991 was Salar Jabbar Mustafa, Azad’s older brother. For Azad – who left Iraq for America with his wife and four children in 2012 to pursue a PHD in engineering at Texas A&M- the murder of his beloved brother was as painful as it was seemingly inevitable. “Salar was a courageous man who was an opponent of Hussein’s murderous regime and paid the ultimate price for it.  I will never be able to get over his death.   Yet, in a tragic sense, I should have been prepared for it, because I had lost many close relatives, including several cousins and nephews, during Anfal”.

In 1991, however – the horrible year that Salar and thousands of his fellow Kurds were slaughtered – the world saw the beginning of the end of Hussein’s war of annihilation against the Kurds and other ethnic minorities, and also saw the start of the barbaric dictator’s eventual downfall. Coinciding with America, Britain and France’s establishment of no fly zones over northern Iraq, battle hardened Kurdish freedom fighters, descending from their hidden guerilla camps in the Northern mountains, engaged Iraqi soldiers in deadly street to street combat.  Suffering overwhelming losses, Hussein’s army was forced to flee, leaving the Kurds the freedom to finally establish their own self – rule in a province they coined,  “ The Kurdistan Regional Government (KRG)”. 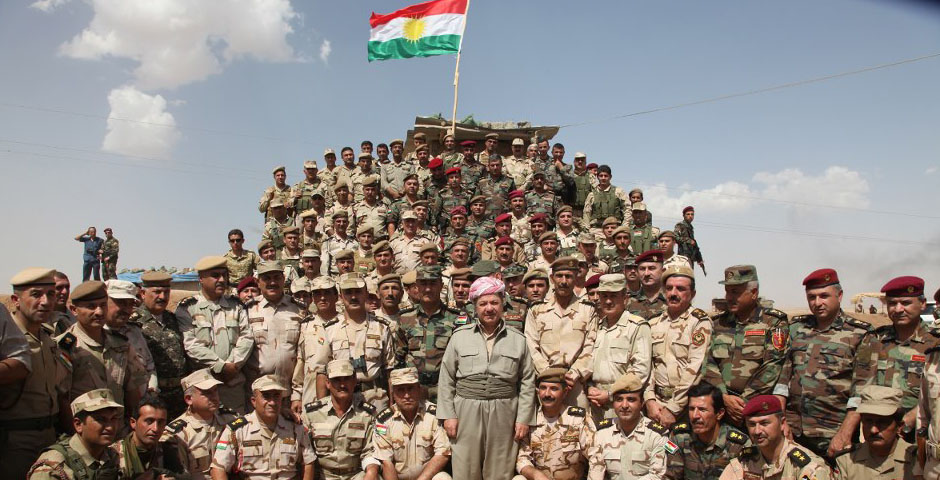 President Barzani as the Chief of Commander of Peshmerga Forces.
Photo credit: waarmedia.com

This new Kurdistan government, while neither recognized by any nation in the world, nor given official status at the United Nations, was from its first days through the present, developing political and economic systems and providing governmental services, typical of any sovereign nation. “ The KRG was proactive from the start”, Azad explained. “  They elected their own George Washington as president, a great man named Masoud Barzani { the son of Mustafa Barzani}, started their own police force, deployed soldiers to their borders to safeguard our people from Hussein, created a model civil and criminal judicial system, built two large international airports that facilitated trade and tourism, and, most importantly, developed a free market economic system that resembles that of America.”

Despite this remarkable success, Azad explained that throughout the  remaining years of the 1990’s and the first years of the new millennium,   the Kurds were deeply troubled by the death and destruction that Hussein was still able to foment throughout Iraq, mainly against the Shia minority:    “ We no longer felt threatened by Hussein ourselves.  We had soundly defeated his army in 1992. The Peshmerga {soldiers} were closely protecting our borders, making it impossible for Hussein to even contemplate an invasion. Yet, he constantly remained in our minds because his horrible crimes against his own people continued”.

Describing those crimes, which, he said, were similar to those committed against the Kurds, Azad stated, “For Hussein’s barbarity against all of his people, not just the Kurds in the past, we wanted justice”.  As the world knows, that justice was to come. In March 2003 in what became known as the “ Second Gulf War”, America, under President George W. Bush, led an international military coalition that toppled Hussein’s regime. Forced into hiding, Hussein was captured by United States soldiers in December of that year, and under the orders of an Iraqi tribunal Hussein was executed in 2006. The justice the Kurds prayed for had been served.  With Saddam gone, the Kurds expected the world would finally recognize the KRG, making Kurdistan an internationally recognized independent nation and granting it full membership in the United Nations.

Yet that was not to be. “ After Saddam was gone”, Azad recalled, “ the leaders and all citizens of Kurdistan hoped and expected the international community would recognize our suffering under Saddam and acknowledge our early role in the fight to dispose him and finally grant us our independence. That independence was never granted, and we remain a people unjustly denied our own nation.” 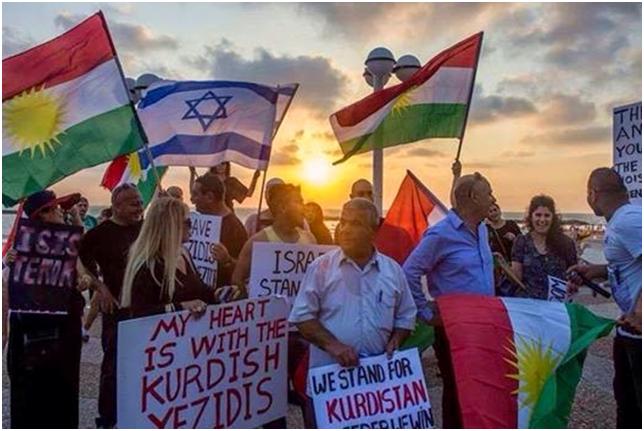 A call for recognition of Kurdish statehood. Photo Credit: www.jpost.com

The political and moral arguments cited by Azad for granting Kurdistan full independence might seem to be beyond moral dispute. However, there remain in the region geographical, demographic and ethnic factors existing as serious diplomatic obstacles: There are 35 million Kurds living in the world today. Approximately one and a half million of them live in Germany, England, Australia, Israel and America.  But most are spread out throughout Iraq (mostly in the province of Kurdistan), Syria, Iran and Turkey.

With all four of these nations extremely protective of their borders and frequently engaged in their own internal religious and ethnic strife, the idea of redrawing their borders of each to create a “ greater Kurdistan”, as some in the KRG have proposed, has created fierce opposition in the region. In addition, even granting full official diplomatic recognition for the already  de facto independent Kurdistan is opposed by the entire international community, including the Obama Administration.

Such opposition, Azad finds difficult to understand. “I find the resistance  to a Kurdish State quite perplexing. Whatever the eventual borders of an independent Kurdish state would ultimately be, it would be a stabilizing  and peaceful force in the region”, he stated. “ We have helped stabilize the region by fighting and helping defeat Hussein, and currently we are fighting with America and her allies against ISIS to create peace and stability in the region.” 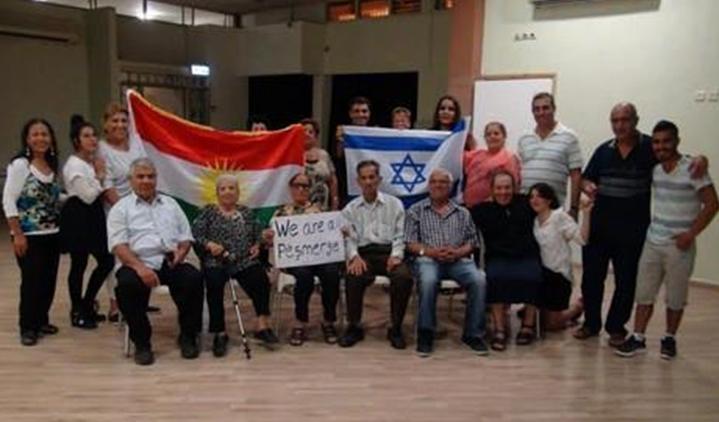 Azad noted that with the exceptions of the war against Iraq during  Hussein’s reign and the current battle against ISIS, the Kurds have never engaged in a conflict with any other nation or people inside or outside the middle- east. He also emphasized that the Kurds treat people of all religions and ethnic backgrounds with equality and respect. “ If you come to Kurdistan, you will see Christians, Arab Muslims- both Sunni and Shia-, Turkmen, Yazidis, Syrians and a host of other groups living in freedom, equality and peace alongside the Kurds”, he declared.  “ In fact”, he added,  “if you visit our regional neighbor Israel, you will learn that there are more than 200,000 Kurds living there as loyal and productive citizens of the Jewish state…. For those in the West in constant search of finding peaceful Muslims who share their values, hopes and dreams, you can easily find them. They are the called the Kurds.”

« PreviousLINCOLN DINNER 2016 SHAPING UP TO BE ANOTHER BLOCKBUSTER
Next »HAPPY NEW YEAR 2016!!