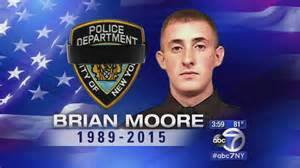 We have lost Police Officer Brian Moore of the 105th Precinct, who died in the line of duty. He was a brave and  dedicated officer and at the age of 25 had a exemplary career. I think it is time to honor him in a way that shows that he was a shinning example for our youth. I therefore have a suggestion, I live in Glen Oaks Village on Commonwealth Boulevard and there is a athletic field being built. According to Anthony, one of the workers one the site, there will be a soccer field, baseball, football and track. The athletic field is in the 105th precinct and located at 76-10 Commonwealth Boulevard and would be a great tribute to Officer Moore if the field was named after him. Furthermore we would be honoring what he stood for and his memory would not be forgotten. Our youth who would be reminded everyday they would play there and that Brian Moore was dedicated to serving and protecting the community. As such hopefully, they would be inspired to be  the best they could be. I therefore ask all of our politicians to look into the possibility that this field be named,” The Brian Moore Athletic Field, the field of dreams.”

« PreviousMARCH WITH QVGOP ON MEMORIAL DAY!!
Next »National Police Week