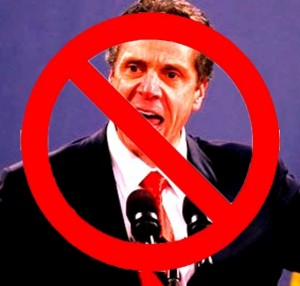 New York, May 12, 2014 – On a cold, snowy January day, a coalition of Republican, Conservative and Democrat New Yorkers came together for a press conference on the steps of Queens Borough Hall to demand an apology from Governor Cuomo for his arrogant and offensive message to all New Yorkers, that if you don’t think the way he does, you have no place in the State of New York.

Governor Cuomo never apologized. On May 20th the citizens of New York will gather once again at Queens Borough Hall to announce the results of the governor’s most recent performance evaluation. In NYS where everyone now is subject to an evaluation, the governor is not above this measurement of his performance.  Now with the widespread dissatisfaction that all New Yorkers feel, the time has come to publicly release his interim report card and let the rest of New York decide on the merits of this evaluation as the governor seeks re-election. November this year, the governor’s final report card will be released.  The people will have an opportunity to give him their final evaluation on his performance in office as they cast their votes.

A.     Adoption and Implementation of Common Core Standards: In NYS, education is the key to opportunity, liberty and the American Dream.  All NY citizens want responsible government, but as is all too often the case in the corrupt halls of Albany, where hushed, rushed back room pallor deals in the dark of night are only too routine, Common Core was born, championed by those seeking a quick-fix deal for federal dollars in a state drowning in debt.  Governor Cuomo has done nothing to improve education, nothing to improve the champions of our kid’s learning – our teachers, nothing to improve the environment of the classroom – where learning should grow and develop.  Yes, our children need broad standards, leadership, classroom resources, focus on reading, writing and arithmetic and not just for high stakes performance testing.  Governor Cuomo gets an F grade in education on this interim report card.
B.      The NY SAFE Act: Grandstanding and seeking the national public spotlight after a wild school shooting tragedy in Connecticut, Cuomo declared a false emergency and ushered in the NY SAFE Act overnight. In one stroke of his pen, Governor Cuomo made felons out of every single active and retired law enforcement officer in the state.  Law-abiding gun owners were turned into criminals overnight.  To this day, the SAFE Act is still under revision costing New Yorkers $ millions, in addition to the compliance costs for shipping firearms to other states.  The attorneys general of 22 states have filed a lawsuit claiming the NY SAFE Act is unconstitutional and now, NY gun manufacturers are moving south. For trampling our rights, declaring a false alarm and his contempt for the law enforcement community, Andrew Cuomo earns an F grade
C.      Reforming the Culture of Corruption in NYS: A University of Illinois report ranks New York as the most corrupt state in America with more convicted public officials than any other state. With great fanfare, Cuomo made a big show of cleaning up the culture of corruption in NYS. Cuomo formed the Moreland Commission to investigate political corruption, but corrupted the commission with interference from his own office and then abruptly shut it down.  For his failed attempts to reform the culture of corruption, Andrew Cuomo earns an F grade.
D.     HUD and Your Neighborhood:  The pride of owning a home is the dream of millions of New Yorkers. Under Cuomo, New York has the highest property taxes in the nation and families have fewer and fewer spending dollars to save for a home, a condo or coop. Big government agencies like the U.S. Department of Housing and Urban Development (HUD), which Cuomo formerly headed in Washington, try to fill a need found in the pride of owning a home but only mask the problem and create more harm than good. Cuomo backs a big government scheme that will lower our home values, raise our taxes and unduly congest our schools, roads and infrastructure, starting with the HUD lawsuit against Westchester for housing discrimination and now charging that Nassau and other counties have local zoning that is discriminatory, in order to control who can live in the neighborhood and what gets built, whether it’s high-density high-rises or legalizing illegal basement apartments. For his involvement and backing of overzealous HUD programs, Andrew Cuomo earns an F grade.
E.      Protecting our Religious Freedom: Governor Cuomo suppressed religious freedom by establishing Obamacare in NYS by executive order, forcing members of the Catholic Church and other faiths to go against their religious beliefs under the HHS Mandate that threatens our First Amendment freedoms. For his failure to protect our Religious Freedom, Andrew Cuomo earns an F grade.
F.       Exodus of NYS Tax Base and Our Economic Outlook: Can you afford to buy a car, a home, get married, have kids, take care of your elder parents, go on vacation, and provide for the education for your children?  As a taxpayer in NY you should be awarded the Medal of Honor for sheer endurance. NYS is dead last in almost every single economic indicator available, and leads the nation in the highest taxes, while bleeding billions of tax dollars fleeing into the tax free coffers of other states. While Governor Cuomo takes a victory lap for bringing the budget in on time, New York leads the nation in people fleeing the state due to high taxes, high cost of living and onerous business environment. For failing to protect your paycheck and for maintaining the worst economic outlook in America, Andrew Cuomo earns an F grade.

The Republican Party stands for the individual pursuit of freedom, liberty and boundless opportunity. We believe New York’s best days are ahead of us.  However, we New Yorkers deserve better from our publicly elected officials.  On May 20th, our coalition of speakers from various organizations will speak out on the “Status Cuomo: Stop the Decline of NY!”  We are speaking out so that the voices of all New Yorkers are heard.  From education, to public corruption, to failing economic policies, to abuse of official power, it’s time for New Yorkers to take stock of this governor, review our interim performance report card and remember come this November, better days are ahead.