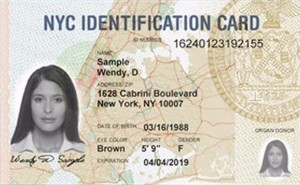 I’m pleased to respond to articles in the New York Post and Huffington Postcovering the Municipal ID program in NYC. Let me begin by stating that, rather than deflecting from the real issues at hand, I would like to answer logically for everyday New Yorkers who may not feel they have a voice.

The Municipal ID program in NYC would have us wade into the national debate on immigrant policy which is now under scrutiny by a Federal District Court Judge in Texas who upheld a law suit in which 26 states have sought intervention over the use of Presidential administrative powers.  This lawsuit puts the President’s actions on hold as his administration seeks to appeal the ruling in Texas to the 5thCircuit in New Orleans.

It is highly questionable whether the Municipal ID program is popular with the voters and taxpayers of New York City. The voters and taxpayers bear financial obligations for NYC policies so it is not likely that they would look favorably on a tax increase to pay for resulting out year costs. New York City looks to both New York State and the Federal Government to bring back to New York City our fair share of tax dollars sent to Albany and Washington DC. The Municipal ID Program could provide fodder for both levels of government to pull back any increased financial support to New York City as a result of this new financial burden self-imposed on our local government. New York City many years ago operated in structural deficit which caused NYS to overlay financial supervision of NYC budgets. Are we headed down this road again? If the Municipal ID Program has value, where is the financial impact statement and impartial study to show all of New York City how involvement with this program will not just bring the undocumented into the daylight but add to the continued stability of the City’s economy.

Legal Immigrants in NYC believe in a strong legal immigration policy.  Today, technology affords us a unique opportunity to streamline the path to citizenship and improve upon our efficiency and effectiveness of our programs. Our legal immigrants are proud, hardworking American Citizens who should not be shackled with the burden of the undocumented and resulting financial penalties.

The first challenge for the Municipal ID Program is whether or not New York City officials can maintain the public trust with the cards they issue and the process they have in place to ID individuals who are self-identified as “undocumented”.  The second challenge the City Officials face is the continuous struggle to control “fraud” as a massive number of cards hit the streets. Fraud hits the uninformed first and hardest as they are likely victims to the scheme to commit fraud. The third challenge could come from the ID Cards put into the hands of potential terrorist. An ID card in the hands of a potential terrorist could assist an effort to undermine the security of our city, state and nation.

In direct response to the Huffington Post inquiry: Republicans believe in the individual, a system of merit, and responsible government. In response to your specific question regarding the Queens Village Republican Club (QVGOP), the QVGOP espouses Republican Party values since the days of President Abraham Lincoln. In fact, Chris, we would like to invite you as our guest to the 140th Anniversary Lincoln Dinner to be held at the historic Antun’s Catering Hall on Sunday March 22nd, 2015 from 3-7PM and you’ll see what we’re about.