No Parole for Cop-Killers

NO PAROLE FOR COP-KILLERS

Please find below a copy of my letter to Governor Cuomo regarding the parole of Black Revolutionary Army cop-killer Herman Bell.  Since PBA President Pat Lynch (press release below) was successful in getting a judge to sign a Temporary Restraining Oder (TRO) to keep Bell in prison until Friday, April 13th, and the Queens Village Republican Club supports our police, please send a similar letter to Gov. Cuomo demanding he overturn the parole board decision to release cop killers.

Campaign address is below and online contact form: https://www.governor.ny.gov/content/governor-contact-form

As the President of the Queens Village Republican Club, whose membership unequivocally supports our police, and have family and relatives who are members of the NYPD, I and our members join PBA President Pat Lynch in urging you take whatever action you can to reverse the parole board’s egregious and irresponsible decision to release cop-killer Herman Bell, a domestic terrorist member of the Black Revolutionary Army (BLA). This cold-blooded assassin gunned down two of New York’s Finest in 1971 in a cowardly ambush. The parole board’s outrageous decision endangers the lives of police officers throughout New York State and the nation. 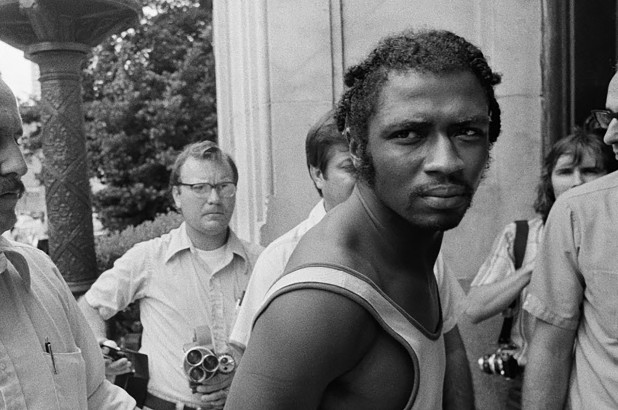 Herman Bell is escorted past members of the media following his capture in 1973.  Credit: AP

Albany, NY:  On behalf of police widow Diane Piagentini, the Patrolman’s Benevolent Association of the City of New York (NYCPBA) filed suit (legal papers attached) on Wednesday, in NY State Supreme Court in Albany County against New York State Board of Parole and its chairwoman, Tina M. Stanford, for failure to follow the Criminal Procedure and Executive laws in considering the parole release of three-time convicted cop-killer, Herman Bell.  Bell and two others plotted to kill and assassinated Police Officers Joseph Piagentini and Waverly Jones in 1971 when they responded to a fake call for help.  The suit alleges that the Board failed to consider the words and intent of the sentencing judge and prosecuting District Attorney before concluding that Bell should be released.  The law requires that such a violation will result in the rescission of the parole date and the establishment of a new panel to rehear the case in order to prevent the “rubber stamping” of the flawed decision.  The suit sought and was granted a temporary restraining order against Bell’s release pending the outcome of the case.  The case is scheduled to be heard in Albany on Friday, April 13th.

PBA President Patrick J. Lynch said: “This Parole Board blew the call by making a decision to release this cold-blooded assassin without having considered all of the facts as the law requires.  To make matters worse, the Board tried to pull a fast one by telling a newspaper reporter that after they had made their decision to release this cop-killer, they read the statements by the judge and district attorney, both of whom indicated that Bell should never be freed, and that it hadn’t changed the Board’s minds.

Well, it is time that they learned that they don’t get to play fast and loose with the laws that govern parole.  They are not almighty deities, and just as police have laws dictating their arrest powers, the parole board also has laws to follow and failure to follow them has consequences.  It is reprehensible that Mrs. Piagentini has to sue a NY State institution just to have them comply with existing laws which dictate that Herman Bell’s parole must be rescinded and a brand new panel must rehear the case. ”

Mrs. Diane Piagentini said: “There are some crimes so heinous that those who commit them forever forfeit their right to freedom.  Herman Bell was convicted after the death penalty was declared unconstitutional and before the sentence of life without parole was instituted.

The judge and prosecutor at his trial made it clear that he should never get out of prison.  He, and many horrible cop-killers like him, who would have been put to death before it was struck down or would have been given life without parole if they committed the same crimes today, shouldn’t be freed because of coincidental timing.  I hear talk of rehabilitation from politicians but I don’t hear talk of murderers being held accountable for their horrible crimes and I never hear even the mention of punishment for their crimes.

Herman Bell denied his crime for four decades.  Now, to meet parole requirements, he has admitted his role in the sadistic murder of my husband Joe.  He should suffer the torment of knowing that he will spend the rest of his natural life in prison for that crime, just as our family has forever been denied the blessing s of having Joe with us.  That is a punishment that he has earned and he deserves.

I implore Governor Cuomo to direct his Parole Board Chairwoman, Tina Stanford, to follow the laws regarding parole and to understand that releasing cop-killers undermines the law, disregards the intentions of the sentencing judge and sends the wrong message to society.  Parole may be appropriate for some who have committed crime, but it is not for cold-blooded cop-killers.”

On behalf of Mrs. Piagentini, the NYCPBA has communicated with the Chairwoman of the State Parole Board, Tina Stanford, on three separate occasions since the decision was made to grant Bell parole to which the Board has not made a single response.  Given the nearness of the earliest parole date, Mrs. Piagentini was forced to take legal action in an effort to obtain justice for the death of her husband.

Herman Bell’s parole date has been set for April 17th.  His murdering partner, Anthony Bottom, will come up for parole consideration in June.