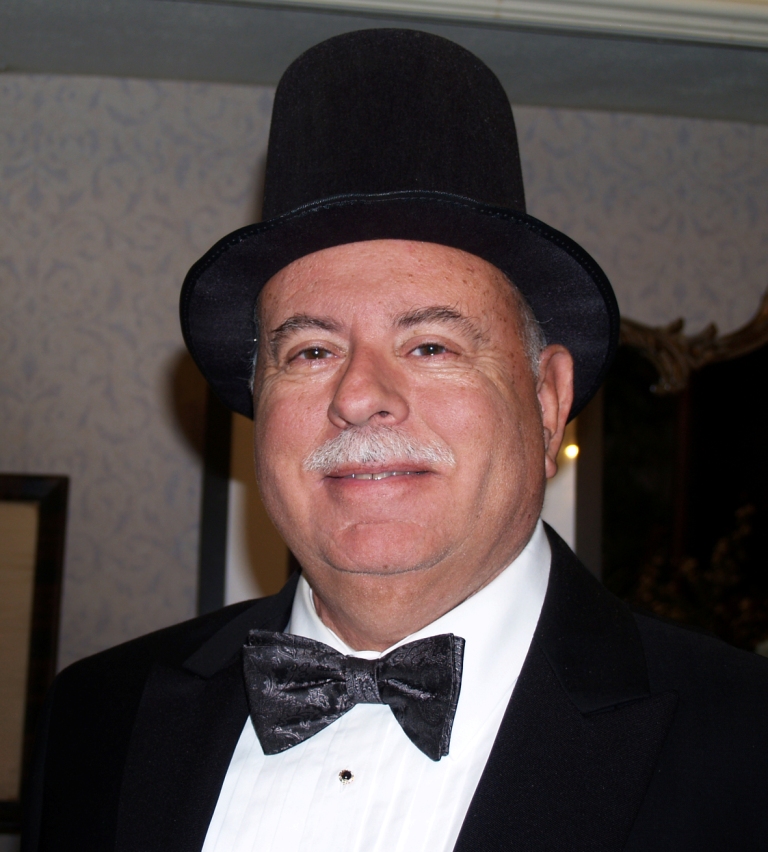 The 141st Anniversary Lincoln Dinner was an unparalleled success breaking all previous records for attendance, journal ad sales, raffle basket sales and overall kudos and congratulatory messages from almost everyone who attended. With his distinctive laudatory flair, Dinner Chairman James Trent said “everything this Republican Club does is doomed to success,” since we were expecting the dinner to top out at about 200, but more than 300 guests attended, who packed the Palm East/West Ballroom at the famous Antun’s of Queens Village. Congratulations to all who participated and worked hard behind the scenes to make this event our greatest success to date! 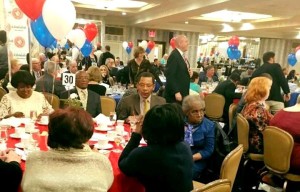 This may have been our biggest and most spectacular annual fundraising event since the Club’s founding in 1875. As is the tradition, we celebrated the legacy of our first Republican President and one of America’s greatest presidents, Abraham Lincoln. We also celebrated the founding of the Republican Party, the Grand Old Party, the Party of Freedom, Opportunity, and Prosperity. 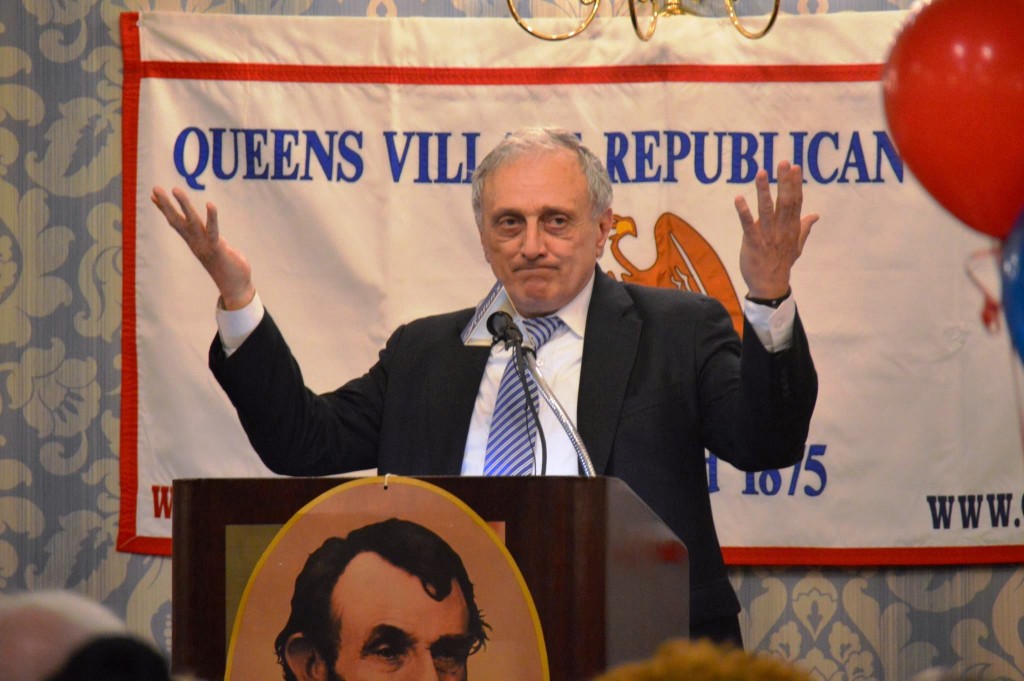 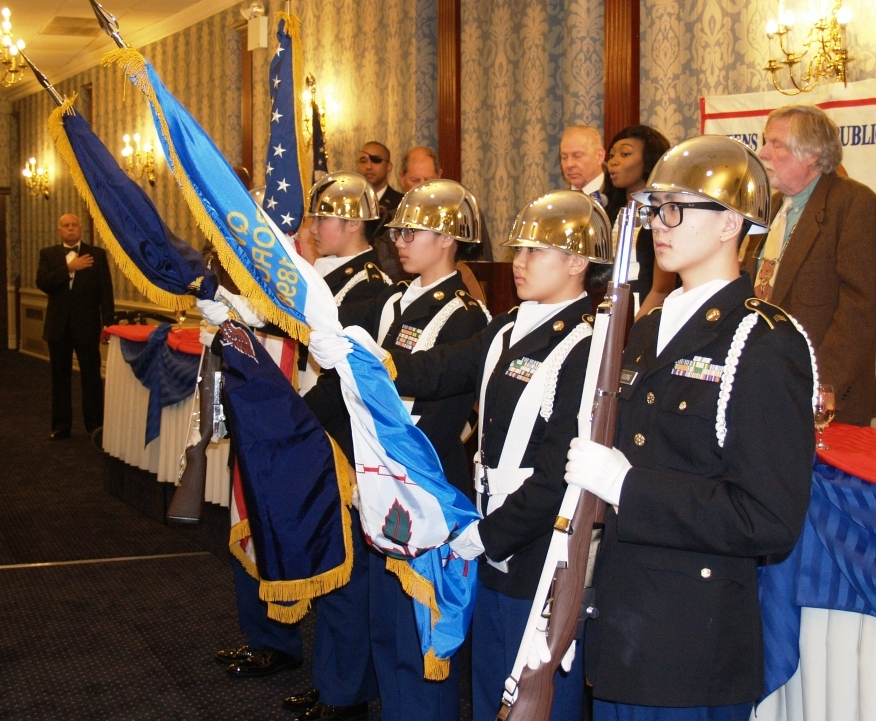 The room was enveloped in an awesome sense of patriotism and love of country as Francis Lewis High School JROTC Honor Guard marched into the ballroom in formation and presented our Colors followed by the amazing voice of Sheimyrah Mighty performing the National Anthem. Next Rabbi Menashe Bovit delivered a sterling invocation praising the exceptionalism of America, the beacon of Liberty and hope to the world.

Ms. Mighty again sang a moving rendition of “The Impossible Dream” as a tribute to the first honoree, Fred Brown, the venerated Chairman of the National Black Republican Council, as he received the Harvey Moder Lifetime Achievement award, which is presented annually to real-life American heroes, memorialized eternally in the name of the highly acclaimed past president of the Queens Village Republican Club, and World War II Veteran honored by Congress for his  lifetime quest to fully account for our POW/MIAs. 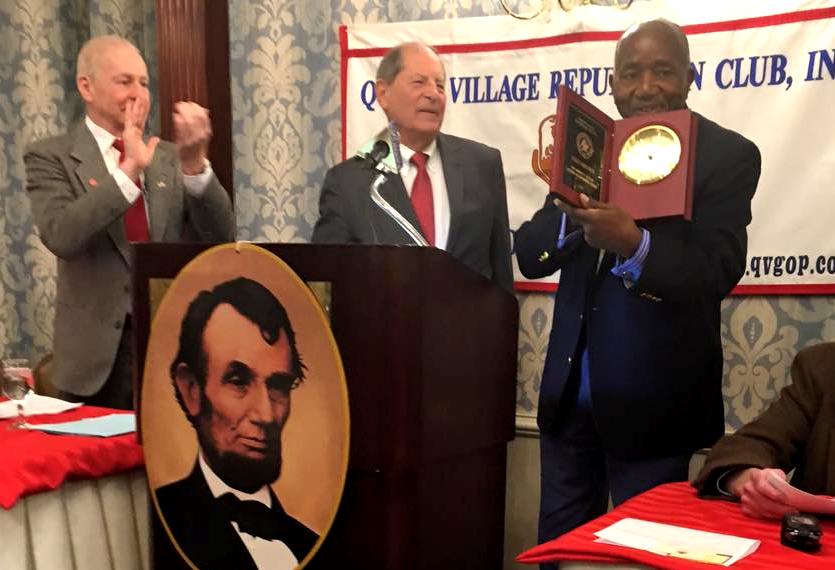 The Honorable Fred Brown has devoted decades as a great pioneer of the Republican movement, becoming a highly respected national Republican political activist by the end of the 1980 Republican National Convention, to which he was a Reagan Delegate. Since then he has been working to make America the greatest nation in the history of the world, creating the NBRC, the largest and most influential minority Republican organization in the state and in the country. He has been a friend, a mentor, an inspiration to all the lives he touched, as his many colleagues who came to the dinner to honor his legacy did attest.

Sheimyrah Mighty’s powerful performance of The Impossible Dream, was a tribute to each and every honoree in the dinner ceremonies as well. They are the great American heroes from our community, whom the dinner guests were on hand to salute, to thank them for their acts of heroism, patriotism and service to our country. The honorees, as well as the many patriots assembled together in the room on this festive occasion have been pursuing the Impossible Dream here in the City of New York, our once great city seized by the progressive left, as we all, “march into hell for a heavenly cause,” in the words of this immortal song about “The Quest.” This is our theme song too, as we, the patriotic New Yorkers carrying the torch, continue to stand up and fight for our values and the great principles of the Republican Party, as Phil Orenstein, the president of America’s oldest Republican Club mentioned in his remarks, concluding with the cry: “Let’s make New York great again!” 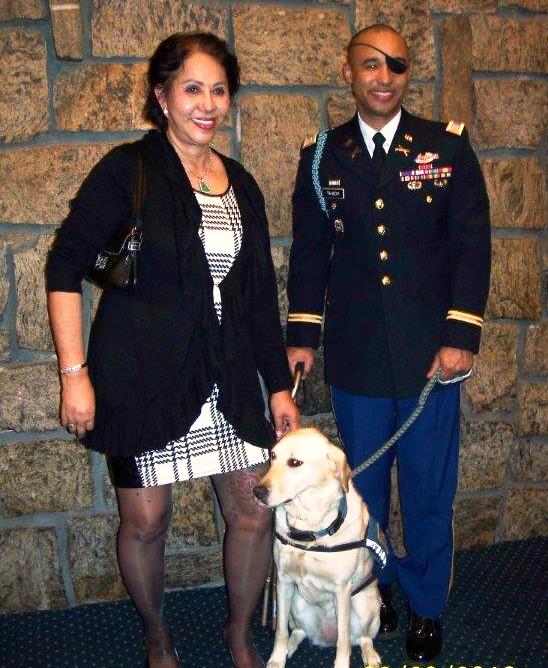 It was most fitting that the presenter for Captain James Van Thach, who received the Rabbi Morton Pomerantz Veteran of the Year Award, was Commander Bernadette Semple, a highly decorated wounded warrior herself. Captain Thach, a Bronze Star and Purple Heart recipient, who was given the honorary title of Brigadier General by the Iraqi government as an advisor to the New Iraqi Army, spoke passionately, as a Veteran’s Advocate with Wounded Veteran Initiative of Canine Companions for Independence (CCI) with his beloved service dog Liz by his side. He spoke about finding one’s passion in life and in one’s community, and to “never give up” the fight. He said to “find a pal” to help you through any difficulty. The passion that gives him strength and purpose in his life, as a Suicide Prevention Counselor and a pal to the numerous veterans and fellow wounded warriors he has met traveling throughout the nation and the world, is to share healing and encouragement with each and every one of them, because of the tragedy of approximately 22 American veterans committing suicide every day. 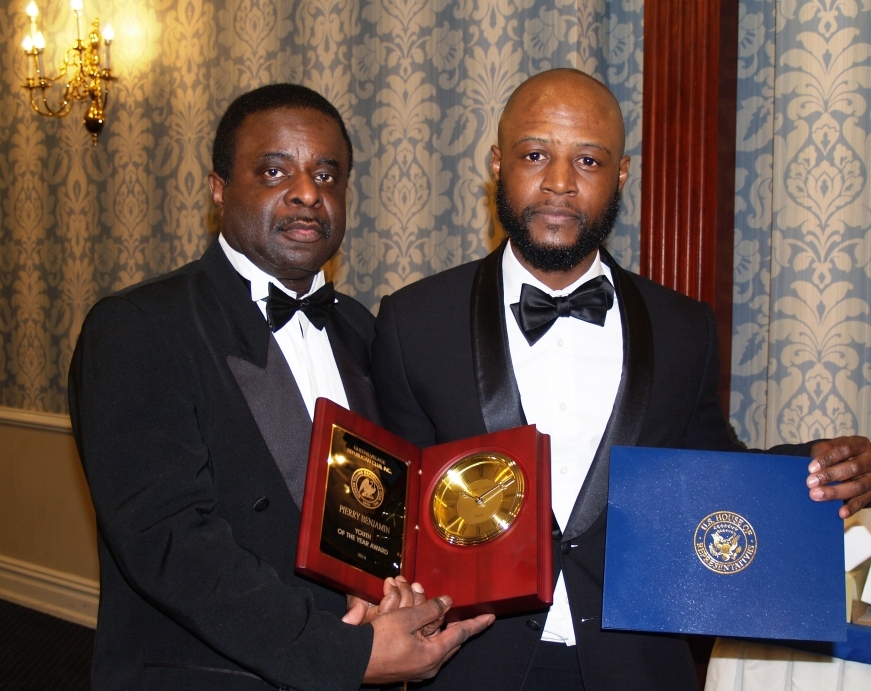 Republican District Leader Francois Wellington (AD33) was the mentor to Pierry Benjamin, and proudly presented the Youth of the Year award to him. Pierry, a remarkable young man with big hopes, big dreams, big accomplishments helping and encouraging inner-city youth, and a big vision for the Republican Party in New York City, spoke about investing our time, our words and actions to make every one of the 86,400 seconds in a day count.

Chairman of Tvistomi Association – Georgian Community Organization of America, Nikoloz Chkheidze was presented the Businessman of the Year award by Hemant Shah who said you can go to Italy but you can’t become an Italian, go to Germany but you can’t become German, but you can go to America and become an American. Nikoloz came to America and became an American. He was a Medical Doctor and a Freedom Fighter against the Soviet regime in Georgia, and said it was the great leadership of his hero, the hero of the Georgian people, President Ronald Reagan, who made it possible to defeat the Soviet Union. He holds the greatest appreciation for America, the greatest county in the world, the country where his dreams are coming true. 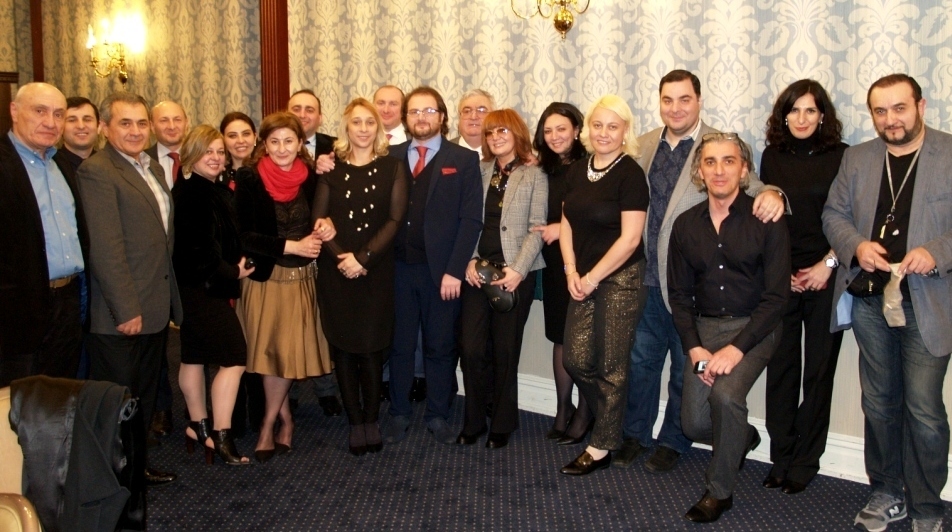 Previous article and photos can be found under the post: “Rave Reviews of the 141st Anniversary Lincoln Dinner.” 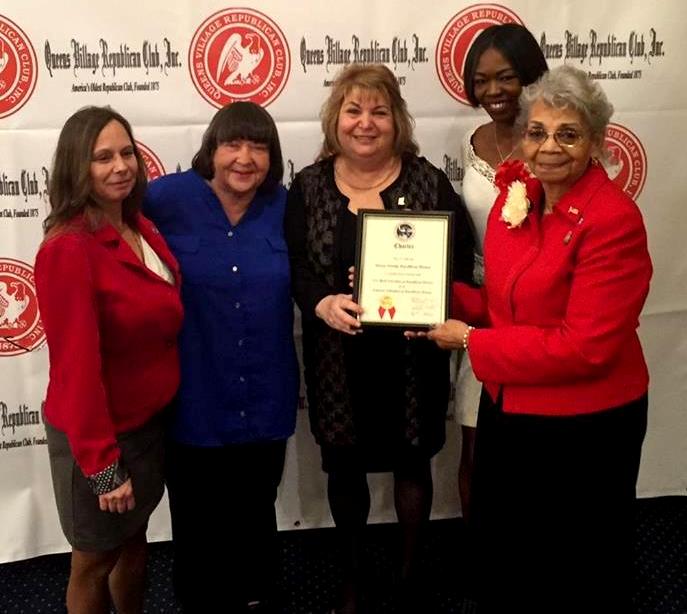 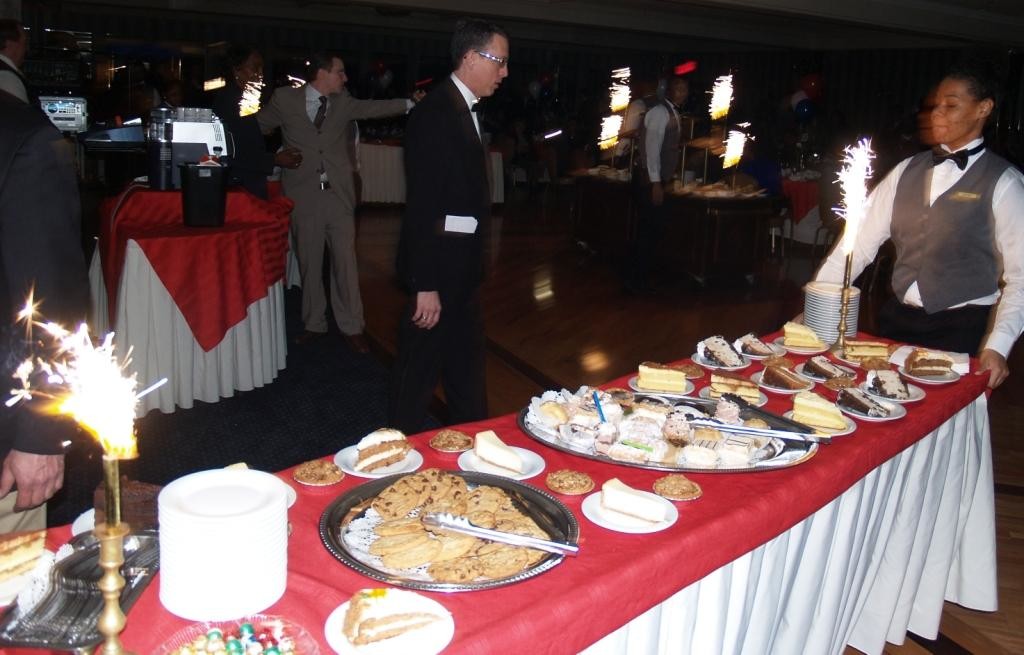 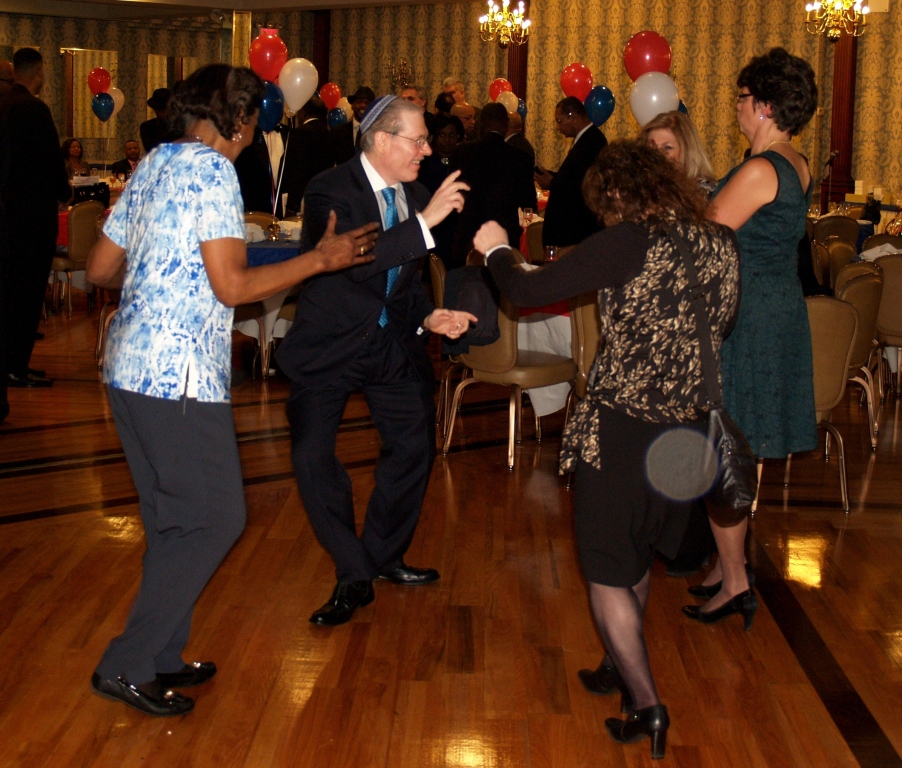 Yes, there was music and dancing!!!

« PreviousLetter to the Editor: Response to “Trump the Tyrant” and other letters
Next »Lincoln Dinner Video: NYS Senator Jack Martins