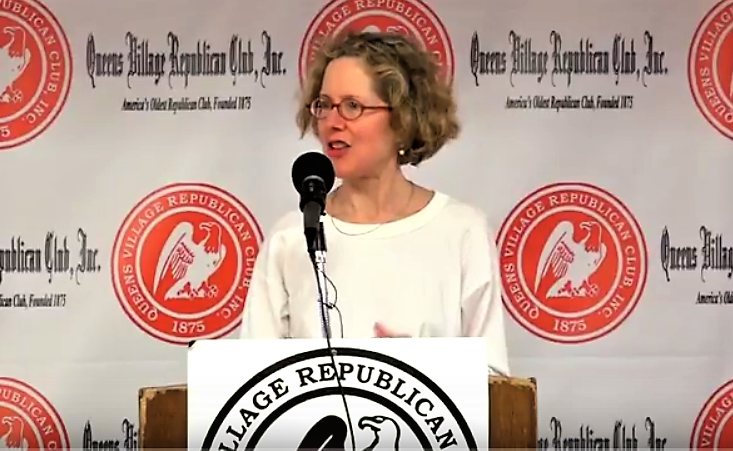 Heather Mac Donald spoke about her book, “The War on Cops”
at the February QVGOP Meeting

“My writings might have drawn the greatest amount of public attention to the term, ‘The Ferguson Effect’, but I am not the one who first used the term. Actually these three words were first coined by Sam Dotson, the chief of the St. Louis {Missouri} Police Department’’, said Heather Mac Donald, whom I interviewed in her upper east side Manhattan office.

Mac Donald, who, focusing mainly on the hot button issues of crime, race, policing and the criminal justice system, has authored two books, written dozens of articles for newspapers and peer- reviewed journals and has frequently appeared on CNN and Fox News, was referring to an article written by Dotson for the St. Louis Dispatch in October 2014 – 3 months after the fatal shooting of 18 year old African American Michael Brown by Ferguson County Missouri Police Officer Darren Wilson.

The Ferguson Effect, Dotson asserted in his column, was that as a consequence of the national media’s sympathetic, almost non-stop coverage of the violent street protests following the shooting of Brown, and the subsequent indictment of Officer Wilson, Dotson’s own officers, working in neighboring St. Louis, had become far less proactive in enforcing the law. As a result, he contended, criminals felt “ empowered”, and law – abiding citizens, would in the near future be more likely to become their victims.

“ Chief Dotson’s description of ‘The Ferguson Effect’ should have served as a national warning about how the failure to support the police could have disastrous effects on law enforcement and public safety. That warning, sadly, went largely unheard”, said Mac Donald.

In a May 29th 2015 op-ed for the Wall Street Journal, “ The New Nationwide  Crime Wave”, Mac Donald re- echoed that warning to that paper’s large audience.  Armed with data that showed that in the then eight post- Ferguson months the homicide rate had increased at alarming rates in many cities, MacDonald confirmed Dotson’s observations and validated his concerns.

“ After Ferguson, as Chief Dotson first witnessed in St. Louis, many police officers began to feel that the more proactive they were in policing the more likely it would be that they themselves might face criminal prosecution. As a result the use of proactive policing has declined throughout urban areas in America”, stated Mac Donald to me.

Mac Donald elaborated it was the same proactive policing that since its implementation in the early 1990’s, beginning with Mayor Giuliani in New York, had put an end to the murder epidemic that had spanned more than two decades. “ The consequences of the decline in proactive policing”, she stated, “have been deadly, particularly for black people living in many of the major cities. Which is exactly what drove me to write the column.”

That column, unlike the Dotson piece on which it was based, drew almost immediate national attention. Pundits from the right, including talk show hosts Rush Limbaugh and Sean Hannity and the editorial writers of, among other conservative newspapers, the New York Post, regularly warned their audiences of the dangers to public safety posed by the Ferguson Effect. And, while not referring specifically to the term Ferguson Effect itself, then presidential candidate Donald Trump seemed as if he had read Mac Donald’s column from beginning to end, when at times during the campaign he spoke of the correlation in the rise in crime with the failure to support the police.

From the left, not unexpectedly, there was any thing but agreement with Mac Donald. Opinion journalists from liberal newspapers, including the New York Times and the Los Angeles Times, wrote that the research supporting the Ferguson Effect was based upon the manipulation of complex data to support a false conservative narrative. And President Obama himself voiced a similar position. In a 2015 speech to the International Association of Chiefs of Police Obama stated those who contend that the Ferguson Effect is a threat to public safety are using, “ anecdotal evidence to drive policy or feed political agendas.”

Dismissing those criticisms Mac Donald told me, “ Even as President  Obama and his legions of supporters in the media and the liberal elite establishment denied the correlation between the rise in crime and the Ferguson Effect, crime continued to dramatically increase in many  American cities.”  Mac Donald noted that even then President Obama’s   FBI Director, James Comey, and his DEA Director, Chuck Rosenberg, had attributed the escalation in crime post the Brown shooting to the Ferguson Effect.

It was, at least in part, to separate fact from fiction concerning the Brown   shooting that motivated Mac Donald to write the book, The War on Cops.  In her book, published in 2016, Mac Donald contrasted the post- Brown shooting narrative formulated by the then nascent Black Lives Matter movement (BLM) and spread by their sympathizers in the media with the facts as determined by a Missouri grand jury which, after listening to the testimony of dozens of eyewitnesses, dismissed the indictment.

According to BLM, wrote Mac Donald, Brown was a“ gentle giant” who, while in the process of peacefully surrendering was shot to death by Officer Wilson. The grand jury, again recounted by Mac Donald in her  book, found that Wilson – faced with a 300 pound Brown, who, while being questioned by the officer about a convenience store robbery committed minutes before, had punched him in his face and attempted to grab his gun- had fired in self defense.

“ The case against Officer Wilson had no basis in fact, evidence or law”, Mac Donald told me just as she had told the readers in her book. “ It was only racial politics that made the prosecutor, Robert McCulloch, take the case to the grand jury in the first place.  And now the harm that this misguided, unjust prosecution of Officer Wilson caused is being felt in many cities across America.”

In her book, Mac Donald provides data to prove that assertion. Focusing on the cities of Baltimore, Cleveland, Chicago, Minneapolis, Los Angeles as well as Ferguson and St Louis themselves, she documented an increase in the homicide rate ranging from 25% in St. Louis to 90% in Cleveland, for 2015, the first full year after the events in Ferguson. Those same deadly trends, Mac Donald noted, had continued throughout 2016 and remain to the present day.

“ All the data studied over the past two and a half year proves beyond any  reasonable  doubt that the Ferguson Effect is real”, she stated. “ But what we often forget is that beyond these abstract numbers are the faces of real people, our innocent fellow Americans, who might still be alive today had the police been allowed to do their jobs.”

Robert Golomb is a nationally and internationally published. Mail him at MrBob347@aol.com and follow him on Twitter@RobertGolomb

Columnist’s Note:  In the few weeks following my interview with her and the writing of this column, Heather Mac Donald traveled first to UCLA and then the next day to Claremont McKenna College (CMC) both located in Southern California. Mac Donald was there to speak to students and faculty about her book, The War on Cops. Sadly, she was confronted by   protesters who did not want her to be heard.  At UCLA, purported BLM members stormed the stage while Mac Donald was answering questions from the audience; at CMC the following day, scores of demonstrators  barricaded the athenaeum in which she was to speak, preventing those who had come to hear her from entering it.

Mac Donald, possessing courage equal to her convictions, plans to  continue to speak at other colleges and universities. Her next presentation is reportedly to be held at Miami University in Oxford, Ohio later this month