Khurshid Abdul-Mutakabbir, Educator of the Year 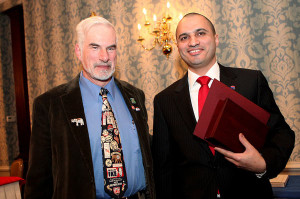 The Queens Village Republican Club proudly honored Khurshid Abdul-Mutakabbir with the Educator of the Year award at the Lincoln Dinner, February 10, 2013. In his acceptance speech he talks eloquently about the values of hard work, self-reliance, individualism, character development that were inculcated into him early on by his Republican parents and grandparents who were proud patriotic Americans. His classical education background which shaped the curriculum of Maspeth High School developed from his Catholic School upbringing. Maspeth High School, the unique and flourishing product of his background, is a new public school created from scratch offering a classical curriculum that exceeds the state graduation requirements. Classical education is the “mechanism through which the morals, values and ethics of our Western Civilization were developed, built upon and still examined.”

Khurshid Abdul-Mutakabbir, Educator of the Year from Queens Village Republican Club on Vimeo.