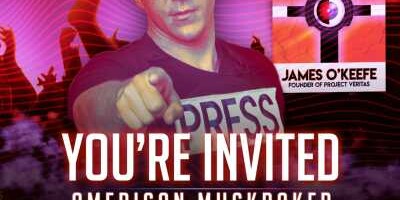 We are proud to announce that James O’Keefe, founder of Project Veritas will be headlining our Lincoln Dinner Gala, and we will be treated to a spectacular multi-media presentation of his pioneering art of undercover journalism in the 21st century! James O’Keefe founded Project Veritas and Project Veritas Action after he had pulled off some of the most consequential undercover journalism coups in a generation, so he could have an organization dedicated to reviving the craft of undercover journalism. These two organizations are non-profits dedicated to investigating corruption, dishonesty, waste and fraud in public institutions and the private sector. A few of his remarkable undercover sting operations include unmasking the machinations of the Deep State to sabotage President Trump, and exposing CNN’s admission of its malicious propaganda plot to remove Trump from office. O’Keefe and his teammate went undercover to expose the corruption of the abortion mill, Planned Parenthood. Project Veritas undercover videos led to the defunding and shut down of the leftist group, ACORN. He exposed Facebook’s censoring operations against “vaccine hesitant” users. The Veritas journalists investigated voter fraud, uncovered massive ballot harvesting fraud, exposed Google’s election interference, and so much more. Come see and hear it all on March 20th at the Gala Lincoln Anniversary Dinner!

Roster of additional nationally acclaimed speakers and honorees is in formation and will be updated often. Visit www.QVGOP.org for details. Make your reservations today for the most exciting Republican Gala of 2022, in the heart of Queens, the hometown of President Trump, for a magnificent display of patriotism, with a cocktail hour, full course dinner, open bar, award ceremonies, music, and dancing! See the link to purchase Gala Dinner tickets or the special VIP tickets, which include a free copy “American Muckraker,” James O’Keefe’s new blockbuster bestseller, plus book signing and photo op with the author, and meet and greet all the special guest speakers.