Hey Brother, Can You Spare A Dime?

Hey Brother, Can You Spare A Dime?

The backdrop is the Great Depression in the 1930s that led to the development of homeless settlements in the country’s major cities—or “Hoovervilles,” an allusion to the then U.S. President Herbert Hoover. Living in tents and shacks, these communities rapidly developed in New York City, especially in Central Park’s then empty reservoir and Riverside Park, but disappeared along with the crisis, writes Diane Jeantet of City Limits magazine back in 2013. 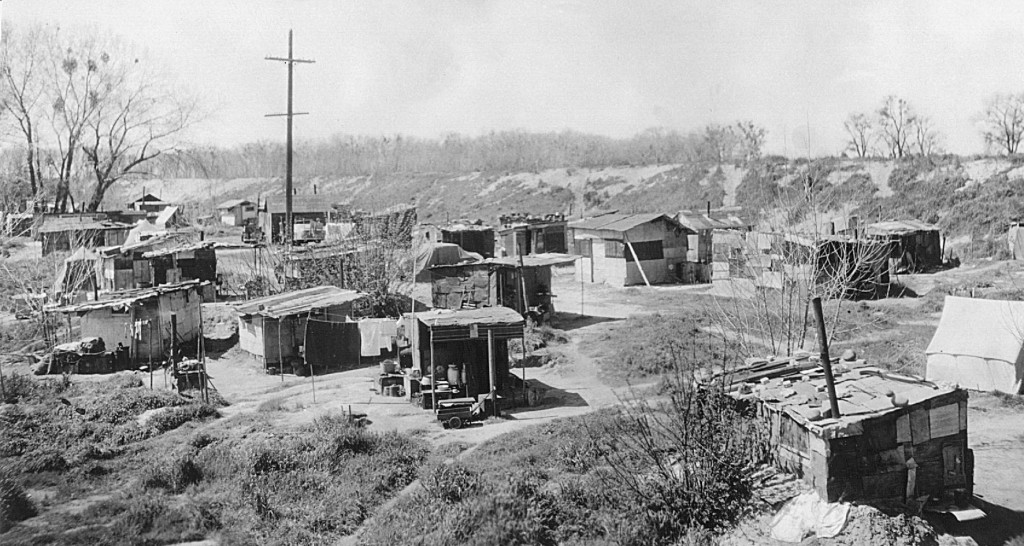 Jeantet then continues to follow the developments by saying during the next half century the homeless population encompassed a narrow band of society, its numbers fluctuating as the economy cycled. Various studies across the country painted a similar portrait of the homeless. Out-of-work white males, often plagued by ill health, alcohol or drug addictions, made up for the greatest part of this socially quarantined community. A large majority was still confined to “skid rows,” and the Bowery remained New York’s homeless hub, where men would be found sleeping in the streets, the subway or tiny, windowless, 90-cents-a-night hotel rooms. Until the decriminalization of public drunkenness in 1966, police stations also became the shelter for hundreds of homeless people on any given night.

“Prior to the 1980s they [the homeless] were the stereotypical middle aged, white men, who had similar alcohol problems, living in skid row areas like the Bowery in New York,” explains Eric Hirsch, a historian of homelessness and professor at Providence College in Rhode Island. “We then saw new groups emerge: younger people and families—a much more economically-driven homeless,” according to Jeantet in City Limits.

There are different theories to explain homeless populations of our inner cities.  Deinstitutionalization of the mentally ill during the 1980’s was thought to be a major cause.  Jeantet explains: “While it is true that the shift was a failure on many aspects, with patients losing health care, most of it was over by 1975. And those who wound up in the streets were often reinstitutionalized—one way or another, the lucky ones in nursing homes, others in jails.”

Fast forward to four of our mayors who have fixated on the homeless problem with varying degrees of success and failure.  Mayors Koch, Dinkins, Giuliani and Bloomberg all had strategies for confronting the homeless issue.  Koch did a 10 percent set-aside for homes but then changed it to barracks style housing with the opinion that if we made it too nice no one would leave and more would come.  Dinkins’ initial approach did manage a longer term housing solution for the homeless, but that changed in 1991 as policy wonks called Dinkins’ revised approach, “Dinkins Deluge”.  This was attributed to the fact that six weeks into his term Dinkins weakened his entire plan and shelters soon became overcrowded.  Giuliani’s plan was a get tough approach to the homeless issues in NYC.  A series of rules were applied limiting times in shelters and scrutinizing those eligibility standards which could make it more difficult to get in.  Little known, however, during the Giuliani years was the fact that SRO (single room occupancies) went down significantly.  Bloomberg took the homeless issue head on and brought in the subject matter experts.  During his term the homeless population actually began to shrink and at one point was almost cut in half.  But his plan took two years to develop and in politics that’s a lifetime.

An associate professor at CUNY’s Baruch College who focuses on welfare and social policy, Thomas Main, stated of Bloomberg: “We usually think of mayors or politicians in general only being motivated by cynical and short term interests. Here’s a guy who took a longer term vision and put himself out on a limb.”

Today we have Mayor de Blasio whose plan to increase affordable housing units by the hundreds of thousands and saturate our local communities is going to be met with confusion and frustration due to the lack of planning, communication and community notification.  De Blasio seems less concerned with solving the issue as Bloomberg and others may have been.  De Blasio seems focused on ridding Manhattan of a plight and transporting the homeless population from borough to borough to borough, and exploiting previously calm, secure and well settled communities.  Missing in this plan is a detailed approach to turning this population into tax-paying functioning New Yorkers.  As homeless individuals and families have been given little in the way of direction, training and food vouchers for outside locations, as well as the lack of proper kitchen facilities where they have been warehoused, the City of NY is wasting millions.  Taxpayers are footing the bill for hotel rooms at $4,000 a month for these substandard accommodations. We have long described the indignity to which the government treats our fellow human beings down on their luck.  We are shocked by the inhumanity of a city government that would itself engage in human trafficking and exploit the suffering of those not only from New York, but from other states and nations who have landed on our doorstep. This is New York and we can do better.