This is a report on the extraordinary September 4, General Club Meeting adapted from the Minutes written up by our recording secretary, Naomi Sica. 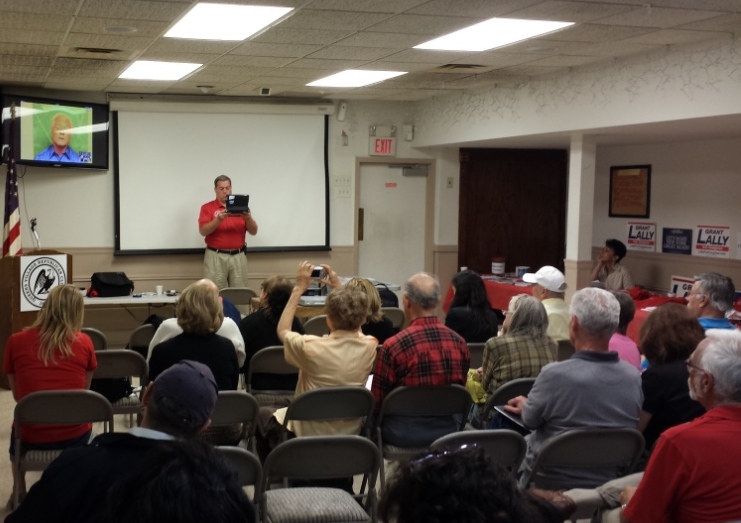 After refreshments, our meeting officially began at 7:30 p.m. with the Pledge of Allegiance led by Delvis Estrada, followed by the invocation led by chaplain, Philip Sica. President Phil Orenstein paid tribute to the NY Police Department, mentioning 9/11 and the extraordinary sacrifice, bravery and work of New York’s Finest.

Introducing our Club and our special guest speakers, he said, “We support our troops, our Veterans and the NYPD. We will never forget the sacrifices our police and firefighters and first responders made on Sept 11, 2001. Long before 2001, Steven Emerson, America’s leading counter-terrorism expert, was investigating and combating Middle Eastern and Islamic terrorist groups in America. He founded the Investigative Project on Terrorism in 1995, one of the world’s largest storehouses of intelligence on Islamic and Middle Eastern terrorist groups. In 1998 he testified in Congress warning about the threat of Osama Bin Laden’s terrorist network and terror cells operating in America. Emerson is recognized as an expert on terrorism and national security and is a consultant to the White House, National Security Council, FBI, Justice Department, Congress and intelligence agencies. He produced his magnum opus film “The Grand Deception,” tracing the roots of Islamic extremist networks in America and the threat their agenda poses to our democracy and our foundation of freedom and liberty.” “The Grand Deception,” was viewed that evening followed by Steve Emerson appearing via Skype. 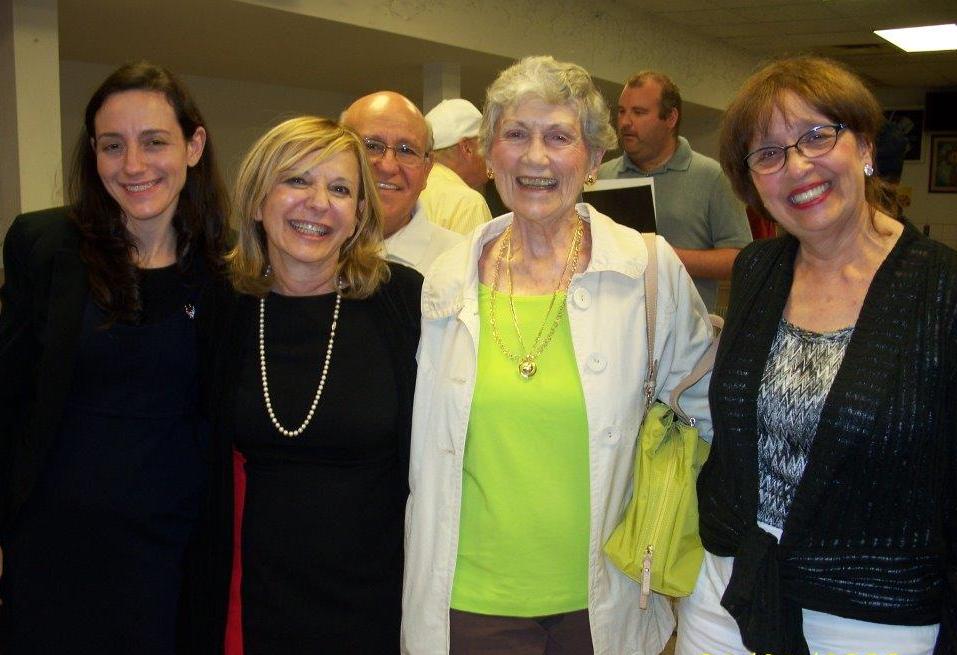 Sarah Stern is second from the left, Jennifer Dekel
is on the left and Irene Alter on the right

We were also introduced to Sarah Stern founder of EMET or Endowment for Middle East Truth, a pro-Israel, pro-America non-profit organization that is spurring an intellectual revolution revealing the truth about the Middle East and radical Islam, educating the Capitol Hill establishment and ordinary folks throughout America. She is on the forefront of the battle fighting for the survival of the Western World, America and Israel in today’s world of moral decay caused by the vacuum in American leadership. Jenifer Dekel is part of Sarah Stern’s great team. She is the Director of Research and Communications at EMET and formerly worked for Steven Emerson’s organization as a Senior Research Analyst.

A big ‘thank you’ went out to our meeting’s sponsor, Ted Anagnostos, owner of the Bellerose Subway, for providing the delicious home baked cookies for both the Aug. 26 and the Sept. 4 Club meeting. Gratitude was expressed for Irene Alter’s great work in contacting and securing the appearances of the guest speakers for the evening.

It was an eye-opening evening where we learned of terrorist threats by extremists who have infiltrated their way into America, threatening our freedom and liberty. The movie’s full title is, “Jihad in America: the Grand Deception,” and is about the Muslim Brotherhood whose goal it is to create an Islamic state all over the world. They believe that death in the service of God, and death to Israel and America are their highest goals. Evidence came in the form of many statements from Islamists in America who uttered such comments such as: “This country [America] is a garbage can,” Muslims “love death more than you love life” and Islam’s goal is to govern the whole world. They expressed that our Constitution is corrupt, evil, and decadent. They believe we are like “Jello” and they are like a “knife.” The movie revealed plans as early as 1991, to launch an Islamist beachhead in the USA. They now have armies infiltrating every institution in our free society, influencing our legal, political, media and educational institutions. The movie further revealed the Islamic centers and organizations throughout North America that are offshoots of the Muslim Brotherhood.

The shocking and revealing movie ended at 8:45 and there was a brief break until we met Steven Emerson on Skype video link-up. Emerson could see us and speak to us and answer questions and we could see and hear him loud and clear on the video monitor. 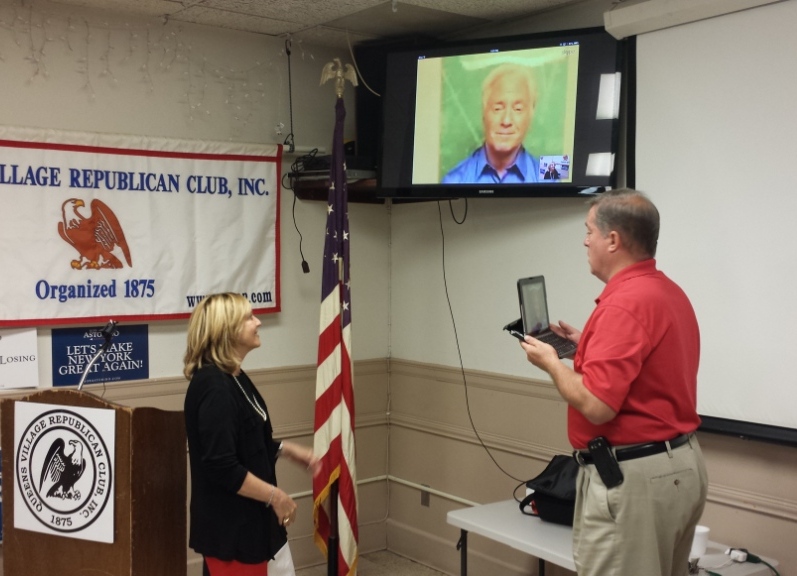 Emerson grew up in Lawrence, NY and has worked for 20 years in counter-terrorism and for 15 years as a journalist. He mentioned that the organization CAIR (Council on American-Islamic Relations) is a front group for Hamas and that Hamas is no different from ISIS. Israel is the best ally of America and we owe it to them to support them. ISIS stands for Islamic State in Iraq and Syria. They rule by Sharia law and are known for beheadings, mass killings, barbaric acts of cruelty and carrying out public executions, crucifixions and other violent acts. They have taken on large swaths of northern and western Iraq. The group controls hundreds of square miles, ignoring international borders from Syria’s Mediterranean coast to south of Baghdad.

In answer to one question about ISIS, he mentioned his grave concern that Obama has no plan yet. A tepid response to confront ISIS will only allow them to use our attack on Muslims as a pretext for mass recruitment and mobilization. ISIS is a great threat that if not addressed and totally eradicated, could bring about World War III. 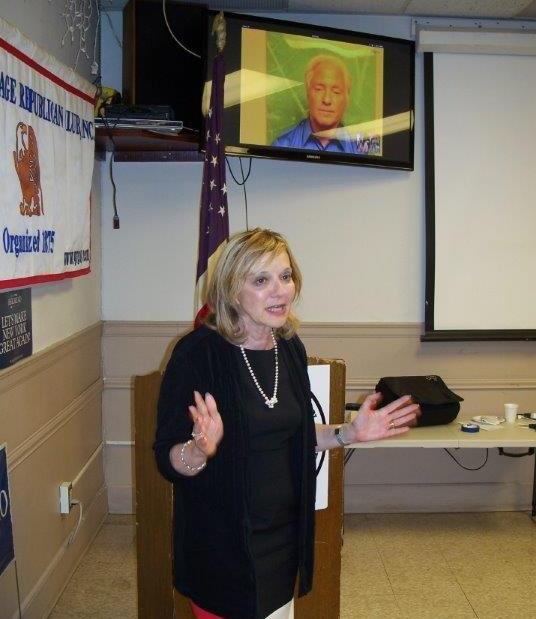 Sarah Stern, a “one woman army.”

Sarah Stern was introduced by Steve Emerson who called her a “one woman army.” She gave an articulate and impassioned report saying that Muslim Student Association groups meet and teach on college campuses and want to destroy Western Civilization from within. Our country was founded with religious freedom and our Constitution is precious to us. These Islamic threats are a much greater problem than our parents generation had with Communism or Nazism which were defined threats. She emphasized that we need to know our history in order to understand who our enemy is.

She said that Obama showed his true colors in his second administration. His policy is “so upside down and wrong” in allowing Muslims entry into our country while his limits Israelis. We are “throwing our friends under the bus” and “holding our enemies dear.” The population of Christians is decreasing in every country on earth except for Israel, where they are growing because Israel has taken in tens of thousands Arab Christians persecuted in their motherlands.

Reagan called America the moral compass of the world and strengthened our national defenses, but now we have gutted our military budget. Ms. Stern said “we need to be intellectual revolutionaries.” Terrorists are infiltrating our borders; we have the enemy within. She concluded her comments and the question and answer session at 9:50 p.m.

We were encouraged to contribute to EMETonline.org so that Sarah Stern can continue her noble work.

The Grant Lally fundraising dinner was announced to be held on September 17 at the Trattoria Lucia Restaurant. We were encouraged to come and invite friends in order to defeat Rep. Steve Israel.

The meeting concluded at 10:00 p.m. with a benediction prayer by chaplain, Philip Sica.