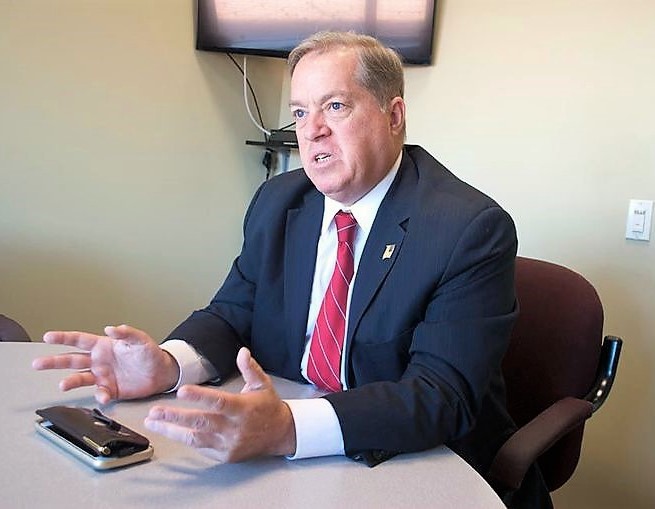 Former NYPD Capt. Joe Concannon, who is challenging Councilman Barry Grodenchik, does not think that the protective bike lane around MS 74 in Oakland Gardens is making the pickup and drop-off traffic frenzy at the school safer. PHOTO BY RYAN BRADY

Republican City Council candidate Joe Concannon worries about District 23. The hopeful, who is running his second race against Councilman Barry Grodenchik (D-Oakland Gardens) — in 2015, they faced off when the seat was open — says that city government could be doing much better by its residents.

He points to the protective bike lane that the Department of Transportation — with Grodenchik’s support — has installed by MS 74 in Oakland Gardens.

“It’s not that the people in the community are against [protective bike lanes],” he told the Chronicle in a sitdown interview with its editorial board. “They’re against pushing the traffic out in the middle of the street. It is insanity over there.”

Concannon does not think the measure is helping make hectic morning and afternoon traffic safer. “With drop-off and pickup at school, it’s chaos, it’s absolute chaos,” said the candidate, adding that the plan was done “with little consultation from the community whatsoever.”

A former NYPD captain, Concannon is now the president of a company called Integris Security.

Among other issues in the Eastern Queens district, Concannon is very concerned about patients from the Creedmoor Psychiatric Center disturbing people near the facility.

“We’ve seen just an abundance of cases rolling out of Creedmoor where we’ve had church windows broken, 81-year-old ladies knocked down to the ground inside of a McDonald’s, aggressive panhandling behind the Glen Oaks Shopping Center,” he said.

The state Office of Mental Health, which runs Creedmoor, agreed earlier this year to have quarterly meetings about the issue with area lawmakers and other stakeholders. But Concannon would like to see more action: specifically, an “in-house” OMH probe assisted by state Inspector General Sherrill Spatz “to make sure what’s going on is supposed to be going on.”

He also has in mind a system to make sure that the patients who come into the community are good neighbors. It could begin with “structured play,” the hopeful said. “And if they’re proven over time that they can follow that structure, maybe we take you to the next level, and maybe you can have supervised release.”

When it comes to crime policy, the conservative ex-cop is at odds with City Hall. Not a supporter of shutting down Rikers Island and replacing it with county jails, the Correction Officers’ Benevolent Association-endorsed candidate also does not approve of quality-of-life offenses being decriminalized.

“We’ve got less reported crime in the City of New York,” he said. “You know why? We’re not reporting as much crime as we used to.”

The vast 105th Precinct, which covers a large portion of District 23, will be split in two when the long-awaited 116th Precinct is finally in business. Community Board 13 also represents a large constituency and a big piece the district within its borders. Saying that “some of the issues on the [board’s] south end are demonstrably different than the north end,” Concannon has suggested that CB 13 be partitioned into two boards with borders coterminous to the 105th and 116th precincts.

“I think if we have smaller boards on the north and south side, then they can focus acutely on the issues that are concerning them,” he said.

The former NYPD captain also said that he would like to see community boards be given more oversight power when dealing with development. He mentioned a large building going up at Little Neck Parkway and Jericho Turnpike as an example of a project that many in the surrounding community are opposed to.

“The community board should have some sway — I’m not saying that if somebody wants to set up a business, they should be able to ax it totally — but there has got to be some sort of rating system put into play,” Concannon explained.

In his neck of the borough, the candidate said, food carts can be problematic in ways that they are not in Manhattan. “In Queens, certainly in our part of the district down by us, the width of the sidewalk doesn’t really want to accommodate something like that. And the other problem is that these guys, there’s no plan — we’ve good four vendor guys within the throw of a baseball at Little Neck Parkway and Hillside Avenue.” On this issue, he agrees with Grodenchik: the incumbent has said that there is a “surplus” of the vendors at that very intersection.

He would like to see more regulation of the carts, not only because of the limited sidewalk space: the hopeful pointed out that brick-and-mortar stores are already “paying enormous rents.” And the carts, Concannon said, “can’t be on top of one another.”

He said that a good way to make them less crowded would be to limit the carts’ presence to “maybe one every two blocks or something like that.”

Republicans on the City Council are far outnumbered by Democrats. Concannon said that if elected, he’ll be pragmatic with the powers-that-be.

But that doesn’t necessarily mean the hopeful will be best friends with the mayor, whom he is not exactly a big fan of.

“I’m not a shrinking violet and I’m not going to back away from de Blasio when I think he’s doing things that are not in line with the thinking of the people of the district,” said Concannon, who ran against former Councilman Mark Weprin in 2013 and state Sen. Tony Avella (D-Bayside) in 2012.