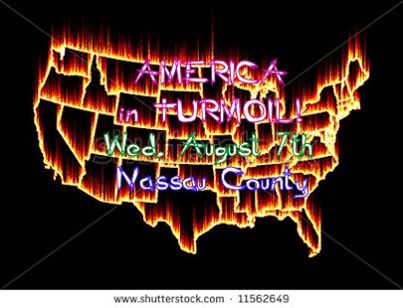 AMERICA IN TURMOIL: Heated Race/Religion/Ethnicity… Relations – Where Are We & Where Are We Headed? WHO IS STOKING THE FIRE?

JOIN US FOR A… SIZZLING AND EDUCATIONAL EVENING!

Examine this volatile situation with a panel of MEDIA EXPERTS!

During an extensive and stirring career in radio, television and print media, Shelly Feuer Domash has hosted radio talk shows, anchored the news on radio and television, produced and hosted a women’s television talk show, wrote for such major publications as the New York Times, Newsday and Police Magazine, and co-authored an acclaimed college text book on crime and the media. She is an award winning investigative reporter for The Long Island Press

Shelly Feuer Domash has produced and hosted numerous television documentaries on many diverse topics ranging from drugs to gangs to breast cancer. She knows the NY-metro area, and in Nassau County, has served as Director of Communication and Public Affairs for the Town of Hempstead and as Public Information Director for the Nassau County Health Department.

Shelly Feuer Domash has received countless awards including Press Club awards, Long Island Coalition for Fair Broadcasting Awards and the Liberty Bell Award from the Nassau County Bar Association. In 2011, she was inducted into Hofstra University radio station’s Hall of Fame. In 2012, among other awards that year, she received the Robert W. Green Award for Investigative Journalism and the Robert W. Green Public Service Award for a five-part investigative series. Just this month, Shelly Feuer Domash received the prestigious 2013 Public Service Award from the ANA covering the U.S. and Canada.

Wayne Dupree is a up-and-coming conservative activist who is featured on the Glenn Beck Show, Sean Hannity Show, Mark Levin Show and others. He is a well-known social media/media personality under the moniker of Newsninja2012. He founded Newsninja2012.com since he sought to be the alternative to mainstream media as well as an advocate of the conservative values that drive him to this very day.

After speaking to Andrew Breitbart last year, two weeks before his passing, Wayne Dupree used that exchange to consolidate and cultivate his message and ideas to reach out to be heard. Newsninja2012.com, his flagship headquarters website has brought in over 2.2M unique views in just its first year of operations. His popularity has grown through social media and through his radio show,The Wayne Dupree Show, located at the405radio.com based in Los Angeles.

As a political activist, Wayne Dupree recently was a speaker at the Jared Marcum Celebration Rally in Logan, West Virginia, where a 14-year-old faced one year in jail because he wore an NRA tee shirt. Charges were dropped one day before the rally. He participated in the DC March for Jobs as opening speaker and gave his Rallying Cry against Illegal Immigration Speech to over 3K marchers. He was a featured speaker during a Truth21 gathering in West Virginia against Agenda 21, and was lauded for standing up and speaking out.

!FREE to the PUBLIC!

BRING YOUR FRIENDS AND NEIGHBORS

BRING YOUR QUESTIONS FOR THE Q&A

Hosted by the Nassau Federation of Republican Women at

– Chapter in Good Standing of the NYS Federation of Republican Women

– Enlightening and Informing People on Issues Affecting our Every Day Lives

– Empowering Women on their Leadership Paths

and in the Cause of Good Government

NOT For Women Only!

« PreviousBlishteyn vs. Lancman at QJCC Candidates Night
Next »Greetings from Scherie Murray for City Council District 31