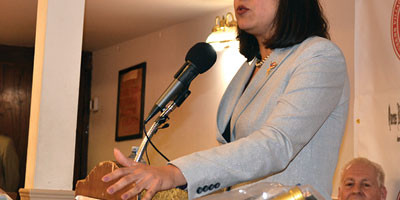 In a speech, Malliotakis accused de Blasio of putting his ideological agenda ahead of basic New York City services, resulting in a “disintegration” of the city’s quality of life.

“Basic services are what our mayor is supposed to be doing, right?” she said. “The basic management of the city—keeping the traffic flowing, the trains running, the streets clean, the streets safe, ensuring that our homeless people are taken care of and given opportunities to turn their lives around. That’s not happening because he’s off fighting a national ideological war instead of doing his job and being the mayor of the city of New York.”

In an interview with the PRESS of Southeast Queens, she pointed to the mayor’s recent public support for the Paris Climate Accord, an international agreement to combat climate change that was recently rejected by President Donald Trump. De Blasio’s support culminated in an executive order on June 2 pledging commitment to the accord, despite Trump’s decision to pull out of it.

“Instead of worrying about what’s happening in Paris, he needs to worry about the subway system that is a disaster, the traffic that barely moves in this city, an education system that in some schools is collapsing and a homeless crisis that is epic,” she said.

She added that she understands that “climate change is an issue”—citing the damage that was done to her Staten Island district during Hurricane Sandy—but believes that the mayor should not step into national and international issues. Her pitch centers on a promise to focus primarily on enforcing the law and ensuring that city infrastructure and services run efficiently.

In her speech, Malliotakis joined critics frustrated with de Blasio’s commitment to marching in the Puerto Rican Day Parade, which until June 2 was honoring Oscar López Rivera, a divisive fighter for Puerto Rican independence who was convicted for terrorism-related crimes. She called it an “absolute disgrace” and “outrageous,” given that New York has been a victim of terrorism.

Since then, the mayor has claimed that he played a behind-the-scenes role in the parade committee’s severance of ties with López Rivera.

Malliotakis entered the Queens Village Republican Club to chants of “Nicole for New York,” but faced a tough question-and-answer session.

One Queens Village Republican member asked if Malliotakis would support Second Amendment rights in New York City, which otherwise has strict gun laws. Malliotakis said that she would not seek “significant changes” to current laws.

“You really believe we’re gonna change gun laws here in the city of New York with the City Council that’s in place?” she said.

Her answer led to some applause, but another questioner called her “dismissive” after she was asked why she didn’t publicly criticize Gov. Andrew Cuomo for waiting two weeks before announcing that he would not march in the controversial Puerto Rican Day Parade. Malliotakis agreed that he should have made a decision earlier, but defended her public stance, arguing that the governor had pulled out earlier than the mayor, she had worked well with Cuomo in the past and she was “not running against the governor.”

“I’m not trying to be dismissive,” she said.

But she received applause on her commitment to crack down on quality-of-life crimes, cut back on traffic cameras and push back against the city’s commitment to protecting some undocumented immigrants who have committed crimes.

« PreviousStop the city’s deranged plans to honor Sarsour and Rivera
Next »A Tribute to the USS Fitzgerald and the U.S. Navy