Congressman Dan Donovan, who serves as a member of the House of Representative’s Homeland Security Committee and was recently named to chair the subcommittee on Emergency Preparedness Response and Communications, said: “Even just months after the murderous attacks in Paris and San Bernardino,  and even as his own CIA Director James Clapper recently said it is inevitable that terrorist organizations will attempt to attack America this year, President Obama has taken a sledgehammer to a program that has served to help protect us from a second 9/11”.   After we recently heard from two top Police Officers from the Queens County North NYPD Counter Terrorism Unit  (CTU)  at our monthly General Club Meeting on March 3rd, we see how drastically these counterterrorism budget cuts will impact our lifes, our safety and security in NYC. 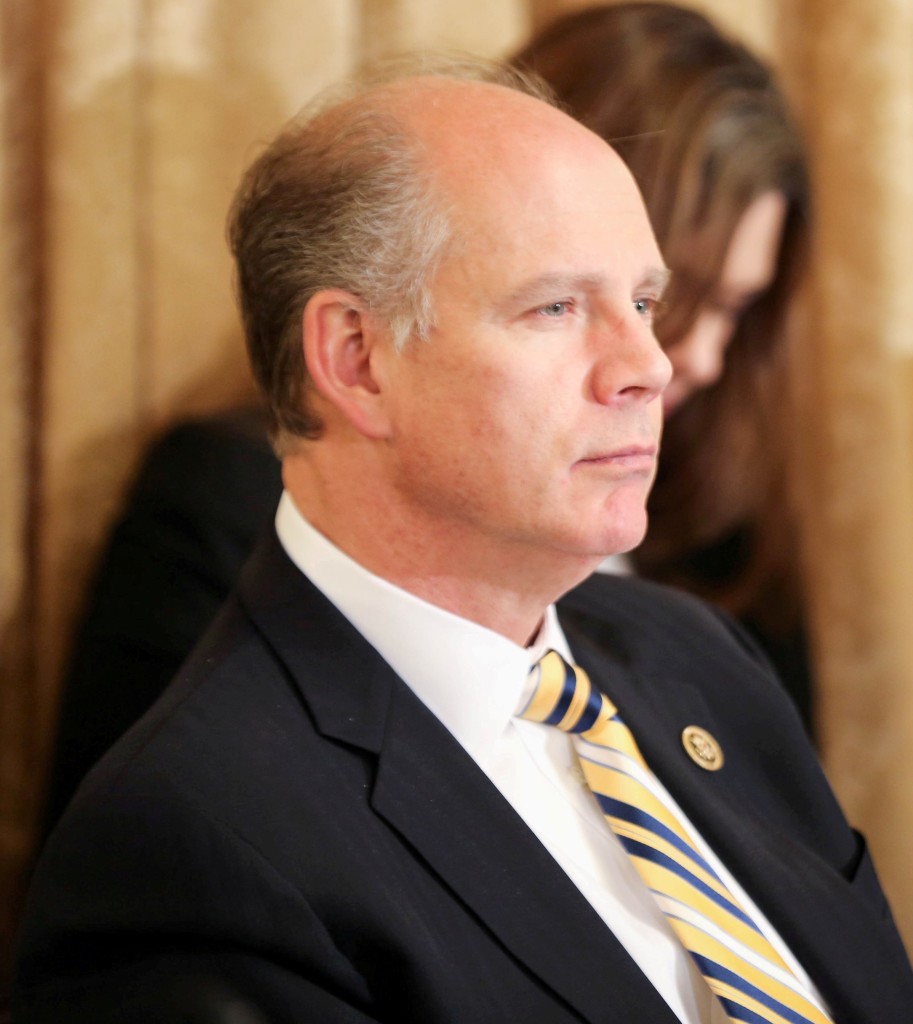 “When the planes hit the Towers on September 11, we on Staten Island and Bay Ridge, living our lives just miles from Ground Zero, saw it, smelled it and felt it.”  Those were, after our cursory introductions, the first words Congressman Republican Dan Donovan, spoke to me in a recent interview held in his Staten Island Congressional District Office.

It should not have seemed difficult to anticipate that the Congressman, whose 11th District covers all of Staten Island and Southwest Brooklyn’s  Bay Ridge area, would want to begin the interview that way.  Donovan, 58,  who after the resignation of his predecessor Republican Michael Grimm,  won a special election in May 2015 to represent the 11th CD, is currently engaged in the beginning stages of a fierce battle with the Obama Administration.

That battle is being waged over a provision in the Administration’s 2017 budget proposal calling for slashing $180 million from the $580 million out of last year’s budget for the Urban Areas Security Initiative (UASI). UASI is a program first begun in 2006 that provides training and equipment for police and fire departments and other first responder units of the 28 American cities considered by intelligence agencies to be among the prime targets of terrorists.

Of those 28 cities – which include New York, Boston, Newark, Washington DC, Chicago, Houston, San Francisco and Los Angeles – New York is threatened with the deepest cuts, losing $90 million from the $180 million it received in 2015.

Donovan, who serves as a member of the House of Representative’s Homeland Security Committee and was recently named to chair the subcommittee on Emergency Preparedness Response and Communications {EPRC} told me that he was stunned by these proposed funding reductions. “ I find it inconceivable” said Donovan, “ that the President is taking away funds from New York and the other designated at- risk cities for a program created to help prevent terrorist attacks.

“ Even just months after the murderous attacks in Paris and San Bernardino”, added Donovan, “ and even as his own CIA Director James Clapper recently said it is inevitable that terrorist organizations will attempt to attack America this year, President Obama has taken a sledgehammer to a program that has served to help protect us from a second 9/11”.

Donovan, the three time elected District Attorney of Staten Island who left that position upon his election to Congress, explained that he plans to use his role as chair of his subcommittee to lead the fight against the President’s proposed cuts. That fight is expected to formally begin when EPRC begins its hearings on this matter on March 15th.  Donovan told me he is presently putting together a “witness list” which will be primarily composed of local officials from the cities impacted by the President’s cuts.“ I intend”, he stated, “ to listen to their concerns and will attempt to focus on why the Obama Administration thinks it’s prudent to slash security funding in such dangerous times.” 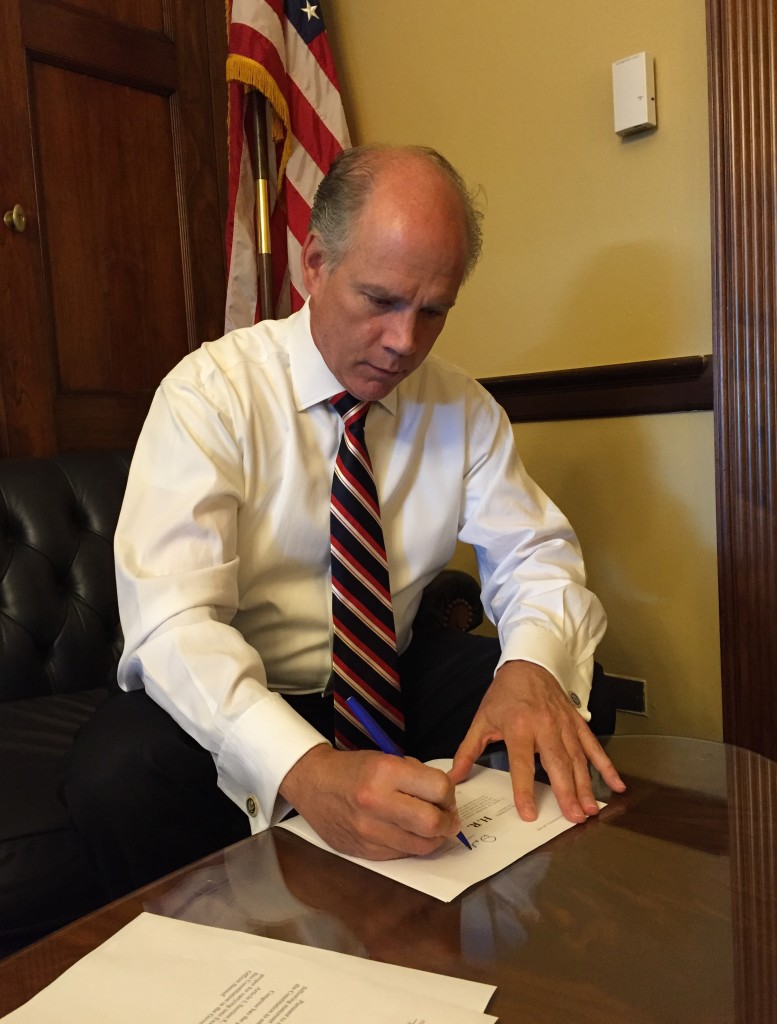 Noting that according to federal statute the President’s budget proposal is simply a request that the President is legally obligated to submit to Congress every year, while simultaneously acknowledging the powerful influence any Presidential budgetary request imposes on Congress, especially to members of the chief executive’s own party, Donovan stated,  “ I know how much my Democratic colleagues can be influenced by the President under normal circumstances. But these are not normal circumstances. This is literally a life and death issue. I am hopeful that all members of Congress, regardless of party, regardless of region, will carefully listen to our hearing, and ultimately will vote to restore full funding {to UASI}.”

There is little doubt that among those carefully following these hearing will be two important New York Democrats- United States Senator Chuck Schumer and NYC Mayor Bill De Blasio, as well as the latter’s appointed NYPD Commissioner Bill Bratton; all three have been early and fierce critics of the President’s cuts. “ Their condemnation of the President’s proposal made it clear from the start that this battle is not about politics, but rather about protecting the lives of millions of Americans”, Donovan asserted.

This will not be the first time that Donovan, seen by some Washington  political insiders as a “ pragmatic  New York conservative”, has teamed  with Democrats to restore funds for the City. Last year, during his first six months in the House, he worked with United States Senators from New York Schumer and Gillibrand to restore $100 million in yearly federal funding for New York City mass transit. 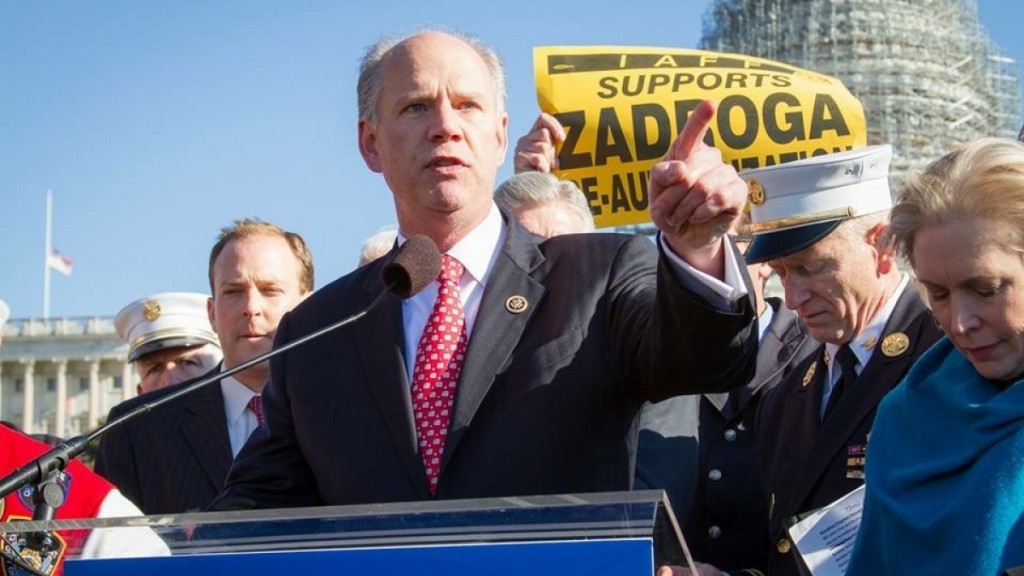 Congressman Donovan at a rally in support of the Zadroga Act
Photo credit: Office of Rep. Dan Donovan

Within that same period of time-in what some in Washington currently view as a precursor to his current battle- Donovan collaborated with northeastern Democrat and Republican Congress members to extend funding for the 2010 Zadroga 9/11 Health and Compensation Act (the Zadroga Act) from five to seventy five years and to increase its annual budget by billions of dollars.

Named after NYPD officer James Zadroga, who died in 2006 at the age of 35 from a respiratory disease his doctors attributed to his assignment at Ground Zero following 9/11 attacks, the Act provides medical treatment and   care to first responders still battling illnesses suffered from their service on 9/11; it also offers financial assistance to the family’s of first responders who were killed that tragic day or who, like Officer Zadroga, subsequently died of illnesses doctors linked to the attack. Reflecting on the importance and meaning of passing the Zadroga Act, Donovan asserted, “ Time does not erase our obligation to America’s heroes who were killed or injured that day. The reauthorization of the Zadroga Act was our way of offering our permanent thanks and respect to these heroes and to their families. And please do not forget that it {the passing of the act} was accomplished through a strong bi- partisan effort.”

Donovan told me that he believes the connection between the Zadroga Act and UASI is self –evident: “ The Zadroga Act assists the victims and the families of victims of September 11th 2001, and the Urban Area Security has been designed to help prevent another 9/11.  Why would the President want to reduce funding for this program?”

Look for that question to be repeated on March 15th.