The world is a dangerous place and that will never change unless we vote.  New York City General Election candidates, Curtis Sliwa, Anthony ‘Tony’ Herbert and Vickie Paladino are the ones to watch this cycle. While some may act as if the elections are over after the June 2021 Primary, there is an upcoming General Election on November 2, 2021.

As a matter of reality, the Biden Administration is doing business with the Taliban. And today, America is less safe than it was just one year ago. The current Administration should have ended the war and pulled out of Afghanistan, but America shouldn’t have left entirely. On the ground, in person presence in Afghanistan is crucial to America’s ongoing safety. Instead, America’s population is left to contemplate the unknown. To add insult to injury, and without adequate vetting, tens of thousands of Afghan refugees will resettle in the U.S. at the taxpayer’s expense, in addition to over one million illegal migrants that have already crossed the U.S. Southern Border. It’s pretty clear that the war against America is not over, internationally or domestically. 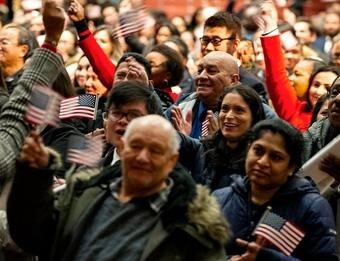 Despite being a lifelong New Yorker, I’ve been to Ellis Island only once, about 25 years ago, when some of my wife’s relatives were visiting. Wokeness, then known as political correctness, was already setting in, and immigration was becoming an issue in the culture wars. So, though I harbored warm feelings about immigrants and their contributions to this country, I steeled myself for an insufferable “celebration of diversity” and harangue about American nativism.

Dr. Devi, who will be speaking at our October 7th Club Meeting, wrote the following letter to our club members and friends:

I am aggressively pursuing my goal of having a televised debate with Jumaane Williams. To force him to a debate, I must raise $115,000 by September 27th. As a candidate, I cannot contribute more than $6000 of my own money. My friends cannot contribute more than $250 for matching funds. If we have a TV debate, 4 million New Yorkers can see us side by side and vote. Without a debate, people generally vote by party, which is why Democrats traditionally win.

I have already raised more money than any Republican in the history of the Public Advocate position. The irony is that most of this money is coming from Democrats. I’m a lifelong Republican (26 years) but– perhaps because of our party’s infrastructure– it has been very difficult accessing Republicans to ask for support. I hope that this letter will help me reach our fellow Republicans.

I am scheduled to speak at the Queens Village Republican Club on October 7th, but to qualify for a debate on CBS, NBC, or ABC, I must reach the fundraising threshold by September 27th.

The Civil Rights Struggle of 2021

The Civil Rights Struggle of 2021

The civil rights movement led to the end of legalized racial segregation and the beginning of the ability of African Americans to be free and equal citizens in the United States of America. But similar oppressive government injustice is happening in New York City today.

About a third of all citizens of New York City, among them the majority of African Americans, have not been vaccinated. De Blasio’s mandate to show proof of vaccination and IDs at NYC restaurants, bars, museums, gyms, theaters, concerts, and other indoor settings, discriminates against millions of unvaccinated New Yorkers, who will be prevented from engaging in normal everyday activities, and even students who are prevented from playing in high school sports. Forced vaccination mandates will prevent many New Yorkers from keeping their jobs. Unvaccinated New Yorkers will be legally prohibited from traveling by subway, bus, or plane. But it also normalizes the outrageous mandate that people are required to show their private health papers and personal identification.

Mandated vaccines for all is the civil rights issue of our time. Government overreach has now created loss of privacy of our personal health information and has demonstrated that we can be fined and even jailed for not complying with their unconstitutional and illegal “laws.” But we know that these are not laws, they are government proclamations from the mayor and public officials.