A Historical Hotel for Our Military Heroes Fights to Survive

A Historical Hotel for Our Military Heroes Fights to Survive 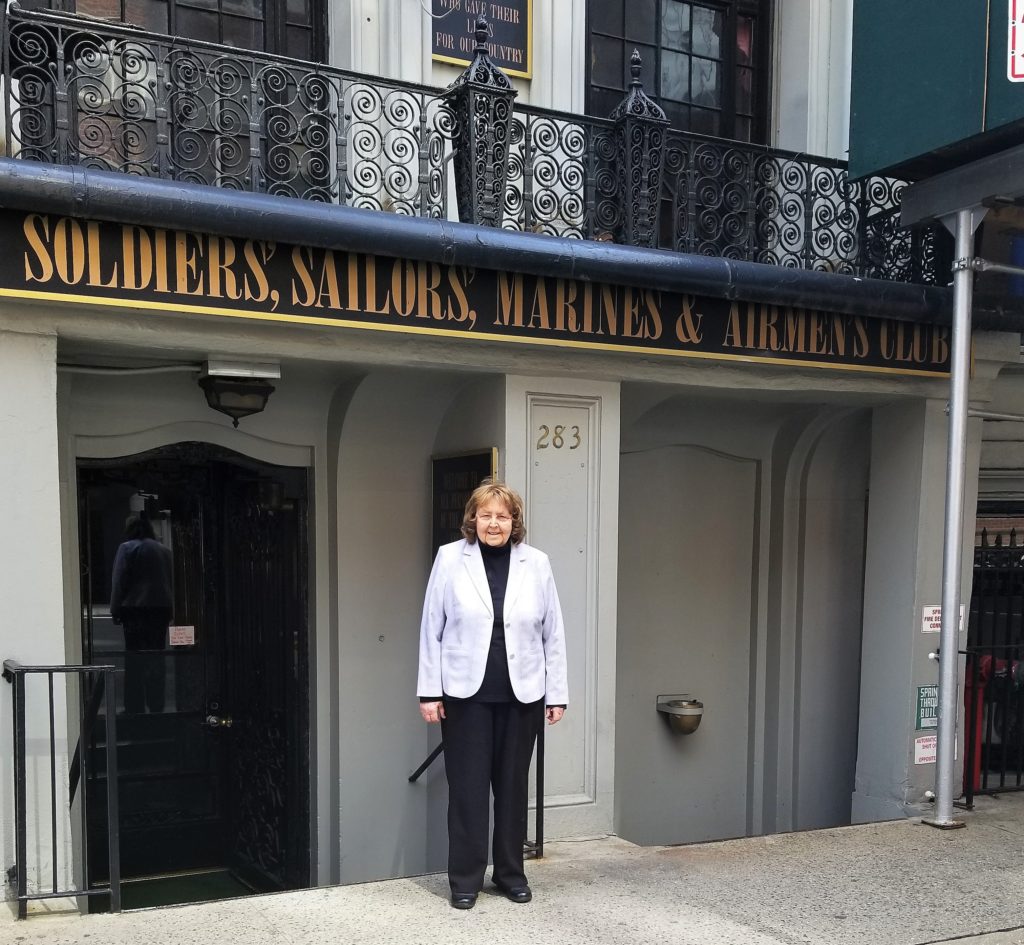 “We have had an incredible 99-year-old history, and we try to honor that history continuing to provide important service to the brave men and women who currently serve or in the past have served in the American military, and also, to their families, as well. We also, but to a much smaller number, provide the same service to military men and women of our allies”, Hazel Cathers, the Executive Director of the Soldiers’ Sailors’, Marines’ and Airmen’s Club (SSMAC), told me in a recent interview.

According to Cathers, providing the first two is no small task. She explained that SSMAC employs three full time maids who clean every room on a daily basis and retains six rotating desk managers who carefully monitor the ingress of residents and their guests, making sure that potential- and in the worst-case scenario –  dangerous, intruders cannot sneak in.

To Cathers, 77, who worked for the USO for forty- eight years before assuming her current position 11 years ago, this is the least that SSMAC owes to its clientele. “Some of our residents have recently returned from combat missions in Afghanistan, Iraq and Syria” she stated. “They along with their comrades have crawled in mud with rifles in hand, facing an enemy which wanted to obliterate them. Other recent and current guests have served in wars going back to Korea, Viet Nam and the Gulf War.  We take it as our sacred duty, responsibility and honor to provide them with a safe, clean and healthy living environment for the several days or few weeks that they will be staying here.”

Still, Cathers explained, what makes SSMAC especially appealing to its guests is its affordability and location. Noting that the commercial hotel located next door to SSMAC charges its guests $ 375 a night, the going rate of the other several hotels located within this upscale neighborhood known as Murray Hill, Cather’s told me that she was proud that SSMAC has been able to keep its daily occupancy rates low by comparison, with the fees ranging from $40 for Cadets and Midshipmen to the maximum rate of $75 paid by officers.

“Our location is perfect for our guests. There are many excellent and reasonably priced restaurants, starting just around the corner (on Lexington Avenue).  We are within walking distance to Penn Station, and the Theatre District and just few bus or train stops away from Central Park, Wall Street and Museum Row”, said Cathers.  “And what is most important to the active military personnel, veterans and families of both” she added, “is that we are able to charge rates that are actually one fifth of what they would have to pay in other hotels in the neighborhood.

“Just about an hour ago”, she continued,  “ I saw a sergeant who had recently served and been wounded in Iraq leaving the hotel with his wife and two beautiful young daughters on their way to the Central Park Zoo, which was made possible for them and thousands like them, I believe, by our prime location and low rates.”

Maintaining those low rates has not come without a struggle for SSMAC. Its operating costs, Cathers noted, like that of most hotels, are huge.  In addition to the three maids and six floor managers, SSMAC employs 3 fire safety directors, one operations manager, a building manager and an accountant- typical of any other hotel of its size. And again, like any other hotel, SSMAC’s expenses include routine and emergency repairs, telephones and, of course-  gas and electric.  “ With the low rates we charge and with our huge monthly overhead, just paying the bills can sometimes be somewhat difficult.”

Actually, very difficult.  SSMAC does not receive financial assistance from any organization or entity-  including the United States Military- associated with the federal, state or municipal government. Which leaves SSMAC to depend heavily upon donations from private charities, non-governmental organizations and individual benefactors to help offset its low- priced room rates and pay its bills. “ We are very fortunate to have generous, patriotic and loyal  donors” Cathers stated.

However, even with the generosity of those donors, SSMAC usually remains in the red from month to month. Thus, as another way to raise funds, SSMAC sponsors two annual events  – the  “ Red, White and Blue Luncheon” in May and the  “Military Ball” in December.  While in the past these events- which combined have been attended by up to three hundred and fifty  people annually-  brought in enough funds to keep SSMAC financially afloat, this no longer appears to be the case.

As Cathers explained, “ While the money we take in from our two events, guest fees and charities have remained constant over the recent past, our expenses continue to rise each year.”  Referring to a recent meeting she attended with SSMAC’s 34 member board of directors, Cathers stated, “ These are the kindest most patriotic people you could ever meet. But they are also realists, who understand that if you can’t pay the bills, you have to make a change. So they are considering moving from our current location to less costly areas with lower rents, possibly in lower Manhattan. Should that occur, General Pershing will be turning in his grave.”

The General Pershing, to whom she was referring, was the founder of SSMAC; and his story and the story of how and why SSMAC began might explain Cathers’ passion in invoking his name.  John Joseph Pershing was the Commander in Chief of the American Expeditionary Forces during America’s eighteen- month involvement in World War 1 (April 6, 1917- November 11, 1918).

Under his command, Pershing’s troops defeated German forces in the epic campaigns of the Battle of St. MIhiel, the Battle of Cantigny and the Meuse Agronne Offensive-  victories that historians have viewed as key to America’s winning the war. In fact, in recognition of   Pershing’s contribution to this victory, President Wilson promoted him to the rank of General of the Armies, making him at the time the only person other than George Washington to hold that title.

Beginning in early 1919, Pershing, then stationed in New York City, was asked by President  Wilson to assume another, albeit different type of command. This one centered on finding food and shelter for American servicemen who at the war’s end were arriving daily by the thousands by ship from Europe to New York City.  Without prior warning from the Wilson Administration, New York City Government officials suddenly found themselves totally unprepared to feed and house these heroes, many hungry and sleeping in parks, trains and hotel lobbies.

One of the buildings commandeered was a privately owned abandoned hotel, which after its quickly completed renovation, became one of the main buildings used to house the returning troops of World War 1.

That is the same building which still stands today on 37th  Street  and Lexington Avenue in New York City, still bearing the name that was first inscribed over its front door 99 years ago, “ Soldiers’, Sailors’, Marines’ Coast Guard and Airman’s Club”.

It is a name, location and history which, Cathers believes, are intertwined. “ We have a history” she stated, “ which spans ninety nine years of our American heroes from General Pershing and  millions of other patriots  defending our country in foreign wars,  a building right here in the heart of Manhattan in which some of these heroes have found temporary refuge, and a name which recognizes and honors the branches of our military in which they served. The three are inseparable. So it is my hope and ambition to secure this location for current and future generations of our service men and women.”

Though she knows she will be fighting an uphill battle, Cathers is working to accomplish just that. She is currently devoting much of her daily hours in the planning and preparation for this year’s Red, White and Blue Luncheon which will be held on May 7th, at the New York Yacht Club. SSMAC has already sold 60 tickets to the event. She hopes to sell at least one hundred and fifty more, believing it will give the club the temporary financial breathing room it needs to continue to remain at its current location. “ Every dollar we receive will help us continue our battle to remain at our historical location.” (Tickets to the event can be purchased over the telephone- 212- 683- 4353.)

It is a history which goes back to General John J. Pershing and the brave Americans who served their country in World War 1.