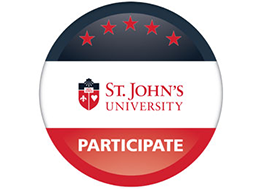 Ira Harris, Republican candidate for NYS Assembly, 24AD, and our local GOP candidates will be speaking and answering questions.

The Candidates Night is being sponsored by the College Democrats and College Republicans of St. John’s University and is part of our annual campus civic engagement program called “PARTICIPATE’16.”  www.stjohns.edu/participate

The attendees will hear from local elected officials and major party candidates for public office in 2016 that represent the following districts: