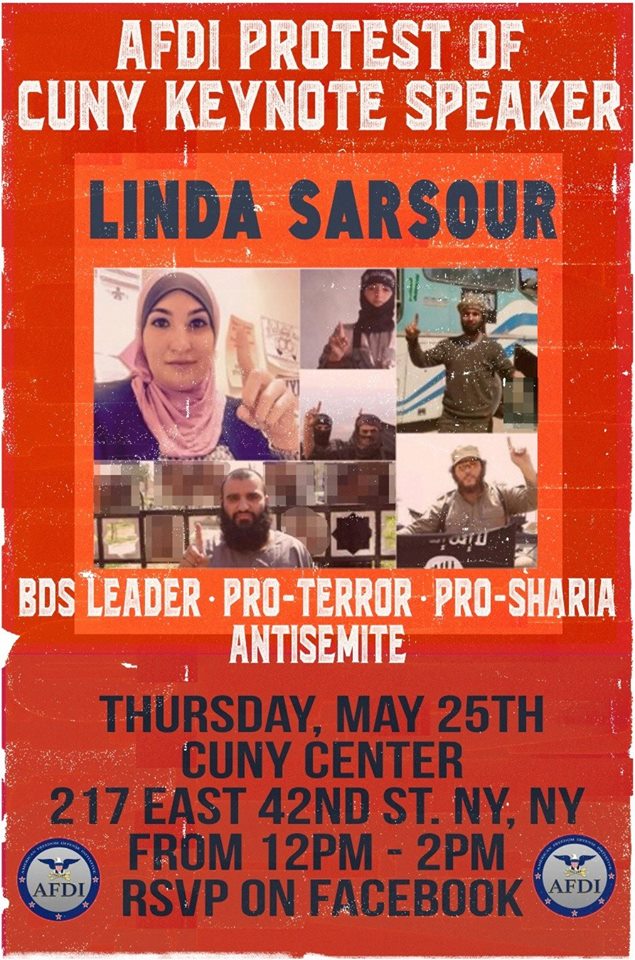 CUNY has invited a pro-terror, pro-sharia antisemite to give the keynote commencement address. And they will not reconsider. Universities have disinvited Ayaan Hirsi Ali, Nonie Darwish, Ann Coulter, Milo, legions of conservative thinkers and voices in defense of freedom, but a vicious, pro-sharia, Jew hater they will defend to the death and that is it right there. They fear jihad. They fear Islamic supremacists. They know no harm with come to them if they smear, defame, libel or cancel us. They know we don’t destroy, maim, behead like Sarsour supporters and their violent running dogs on the left.

URGENT ACTION NEEDED TO GET SARSOUR’S CUNY INVITATION RESCINDED! 3 THINGS WE CAN DO!

1) It is urgent that we flood Chancellor Milliken’s office with phone calls (646-664-9100) and emails (chancellor@cuny.edu) demanding that he rescind City University’s invitation to Linda Sarsour to be the commencement speaker at the graduation ceremony of the School of Public Health.  As of this morning, his secretary was answering his phone and promising to give him all messages.

2) Calls should also be made to Governor Cuomo at 212-257-6405 and 518-474-8390 (in Albany).   Demand that all resources at his disposal be used to rescind the invitation extended to Linda Sarsour, a virulent unapologetic supporter of boycott, divestment and sanctions against Israel which has as its ultimate goal the destruction of the State of Israel.  It was Governor Cuomo who said, “If you boycott Israel, we will boycott you.”

3) Assemblyman Dov Hikind, who is at the forefront of the fight to get Sarsour’s CUNY invitation rescinded, Nonie Darwish and others will be speaking at a demonstration, spearheaded by Pamela Geller, in front of the CUNY administrative offices at 217 East 42nd St., NYC on Thursday, May 25 from 12-2 p.m.

In the words of Jeff Wiesenfeld, “This is a seminal moment in which lack of action will bring regret.”