HAPPY NEW YEAR!!
Ring in the new year with our exciting guest speakers:

Liberal by default and active with the NAACP and Charlie Rangel Club. She walked away from the Democrat Party and is now telling the story of her awakening to the world. She will be signing copies of her new book to purchase: “Escaping the Racism of Low Expectations.”

Installation of 2019 Club Officers and Board Members 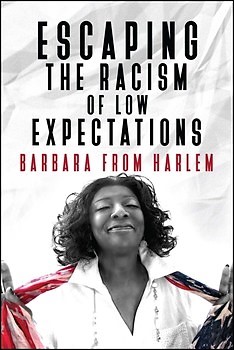 “Barbara from Harlem” will be signing copies of her new book “Escaping the Racism of Low Expectations” which will be available for sale.

I am Barbara from Harlem and my God, my Country, and my Conscience are my guides.

I was a liberal by default. I asked no questions. I had no answers. I just pulled the lever to vote for Democrats as was expected of me. Most of my fellow Black Americans do not fully understand what the term “liberal” means, or who or what they are voting for. And, in turn they don’t realize how harmful those “liberal” policies are to our freedoms and liberties as Americans.

I was born into a culture that believes Black equals Democrat. A broken home, failed marriage, and a feeling of victimization fueled my need for inclusion, which the Democratic Party fulfilled. As an activist and member of the NAACP and Democratic Clubs in Harlem, the men I looked up to—the Rev. Jesse Jackson (whom I also campaigned for), Congressman Charlie Rangel, and Rev. Al Sharpton—reinforced the negative perceptions that shaped my world.

But just like false prophets, the false narrative that has been spoon-fed to us by Black leaders, the Black community, the media, and progressive politicians has enslaved Blacks in a victimhood mentality and entitlement mindset.

But my eyes were opened to reject victimhood and lack of accountability. My journey has proven to me that when you have clarity of conscience, love of God, and a deep-seated belief in America’s goodness, your life will be enriched and your focus will change to one of accountability.

I am Barbara from Harlem. I fought my way out. You can too.