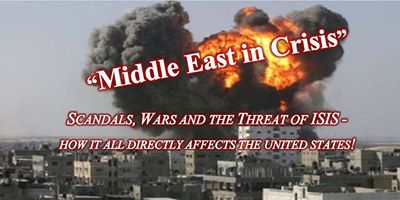 ‘”MIDDLE EAST IN CRISIS!
Scandals, Wars and the Threat of ISIS
How it all affect us DIRECTLY in the USA!”
With Special Guest Panel
– &-
Featured Presentation by Middle East Expert and Policy Analyst

==================
ABOUT SARAH STERN:
Founder and President of EMET (Endowment for the Middle East Truth);
former Director of the Office of Legislative and Governmental Affairs of the American Jewish Congress; former National Policy Coordinator for Zionist Organization of America. Articles in: The New Republic, Commentary, Bretibart, The Jerusalem Post, FrontPageMag.com…. Editor and author of: “Saudi Arabia and the Global Islamist Terrorist Network: America and the West’s Fatal Embrace” among others. Drafted legislation including: Syria Accountability Act, Koby Mandell Act, resolution in support of Israel’s right to build a security fence, and inappropriateness of referral to the International Court of Justice in the Hague. Involved in issues re: stationing of US troops on the Golan Heights, sale of Harpoon block missiles to Egypt, hiring of Hamas agents to teach at the UNRWA camps, issue of anti-Americanism, anti-Semitism and anti-Zionism in our nation’s college campuses, treatment of religious minorities by the Moslem world reform of the United Nations, and energy independence for the free world. Testified before: Senate Working Group on Religious Minorities and Human Rights, and the United States Commission on Civil Rights.
=================