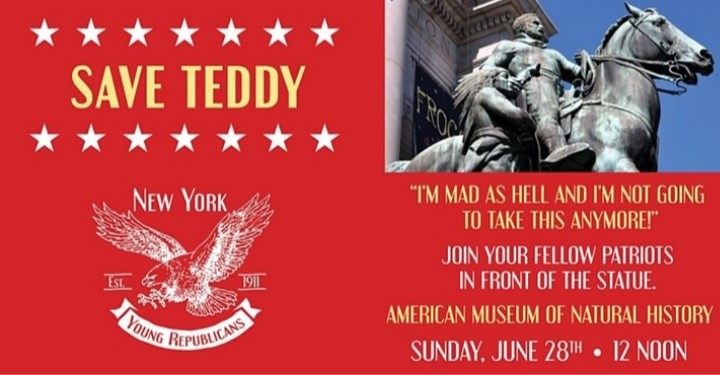 The New York Young Republican Club expresses its unreserved disgust and outrage with the de Blasio administration’s shameful decision to remove the monumental statue dedicated to President Theodore Roosevelt on Central Park West. Commissioned in the 1930s and unveiled with pride as Americans pondered potential involvement in World War II, this statue depicts President Roosevelt in a manner that harkens back to his rough-riding days in Cuba. Roosevelt, astride Little Texas, flanked by figures representative not of racial weakness but of noble human strength, welcomes all to the American Museum of Natural History’s grand entrance and Theodore Roosevelt Rotunda.

President Roosevelt’s impact on American society, both contemporaneously and in the decades since, cannot be overstated. Unlike leftists today who dwell in the dark recesses of their mind when confronted with challenges, President Roosevelt embraced a strenuous, outdoor lifestyle. He ran cattle, wrote histories, and served with distinction in the Spanish-American war as he and his fellow Rough Riders helped conquer Cuba. In politics, he served with pride as Governor of New York, and he remains the youngest man to be elected president at fourty-two years old.

President Roosevelt’s embrace of mankind and his omnipresent interest in the world compelled him to launch the Great White Fleet and brought him to Africa on spectacular hunting expeditions that increased our understanding of animal life.

It pains us to see President Roosevelt denigrated and his impeccable reputation besmirched by abject failures like Bill de Blasio and a small cohort of radical leftists compelled to destroy any sense of Americans’ pride in our history, our leaders, our people, and our successes. Members of the New York Young Republican Club honor, respect, and strive each day to emulate President Roosevelt, and we know personally how this statue has inspired youth to emulate him and the strong American values that he unceasingly expressed throughout his life.

As President Roosevelt said, “I cannot consent to take the position that the door of hope — the door of oppor

tunity — is to be shut upon any man, no matter how worthy, purely upon the grounds of race or color. Such an attitude would, according to my convictions, be fundamentally wrong.”

And so we hope that the opportunity for all who pass by to see this enviable role model will not be stolen by rascals intent on crushing the American spirit and foisting upon all Americans the dark shroud of socialism.

Join us this Sunday, June 28th at noon as we demonstrate in defense of the Teddy Roosevelt statue at the American Museum of Natural History. 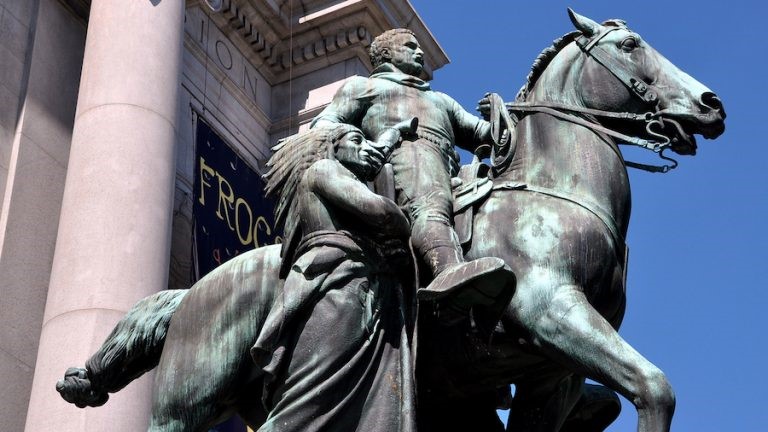